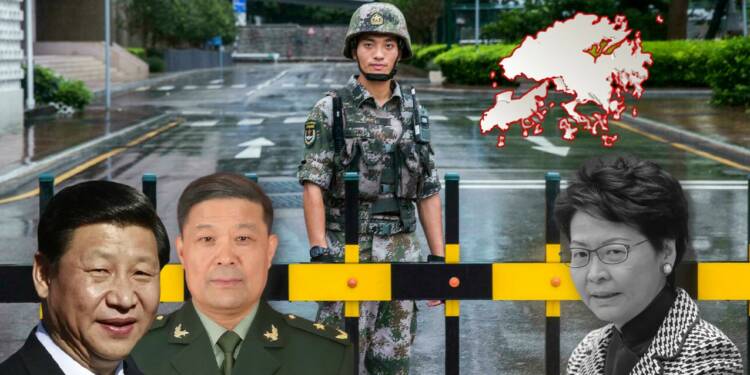 In the latest hard-line step, the Chinese government has appointed the former senior paramilitary officer Major General Peng Jingtang as the People’s Liberation Army (PLA) garrison chief in Hong Kong city. Peng was previously serving in the Xinjiang region as the deputy chief of staff of China’s paramilitary police force, the People’s Armed Police. A CCTV report said that this appointment was a direct order from President Xi Jinping.

The appointment of a military major general from Xinjiang as PLA’s garrison chief of the financial hub of Hong Kong is a clear sign of the plans of Xi and the CCP. One can only imagine what a military major general coming from the Xinjiang region, which is infamous for the CCP’s genocides and human rights violations against the minority Uighur Muslim community, will bring to the city.

The world will not be surprised to see Hong Kong suffer the same fate as that of mass detentions, hard regulations, decrement in personal and religious freedom, and demographic changes that will completely transform the city into the mirror image of mainland China. CCP’s plan to completely take over the island city and loot its wealth is the reason for the fear among the citizens.

After the long and intense clashes (2019 social unrest) between the authoritarian regime of Xi’s pro-CCP Hong Kong administration and pro-democracy people of Hong Kong, this decision is all set to further increase the control of mainland China on the city. This puts the future of the city and its citizens into the hands of the most ruthless dictator of recent times, Xi Jinping.

Carrie Lam, a puppet of the CCP, tried every possible method to mould (with and without force) Hong Kong city, its people, its administration, and its culture according to the will of Xi’s CCP, but it seems that she failed to impress Beijing & satisfy Xi and thus Beijing wants to slowly side-line her and slowly replace her with its loyal PLA poodle, Peng Jingtang.

The reason behind this seems to be the fear of CCP about losing Hong Kong’s rich, talented, and bright human capital. Since the clashes between the authorities and the people started on the issue of new national security law, the population of the city has seen a sharp decline. Citizens are leaving Hong Kong at an alarming pace.

According to the sources, the population of Hong Kong decreased at a record pace in the 12 months that ended in June. Its population came down to 7.39 million, as around 89,200 residents left the city. This calculates to a 1.2% rate of population decline set at the end of 2020, the highest in at least six decades. Also, according to the UK, around 88,800 citizens applied for British National (Overseas) visas in the first three quarters of last year. According to a spokesman for Immigration, Refugees, and Citizenship of Canada, the country started a special visa program for the people of Hong Kong in February and received around 8,237 applications as of Sept 30.

Read More: After ensuring the fall of Hong Kong, Carrie Lam is ensuring its intellectual death

The people are not just leaving Hong Kong, but they are also taking away all their wealth, earnings & deposits with them. This is not just about the brightest and smartest brains leaving the city but also about the monetary and economic loss to the banks, businesses, organizations & authorities of the city. The appointment of Peng as the garrison chief of PLA in the city is clearly a hard-line but dumb & stupid step by Xi’s CCP and is destined to result in the downfall of Hong Kong as a global financial hub and ultimately the collapse of CCP’s plans for Hong Kong.