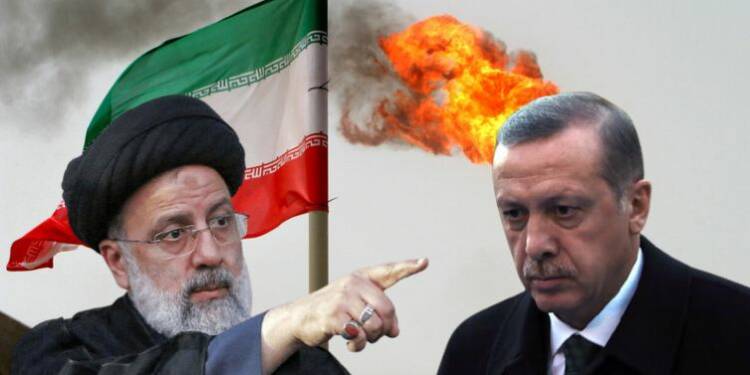 Turkish industry is in the middle of an unprecedented crisis. Turkey has ordered industrial sites and power plants to cut down on gas use and has also said that it would have to slash energy supply. Turkish industry representatives say that all this will lead to a downfall in production. Turkey is reeling under gas shortages due to a cut in gas supplies for 10 days by Iran.

Yet, Iran’s gas supply cuts have more to do with Russia and Erdoğan’s foolhardy behaviour over the ongoing Ukraine issue.

Iran on Thursday notified Turkey that there will be a cut in gas supplies for 10 days due to a technical failure.

Interestingly, the technical failure comes at a time when gas consumption in Turkey is peaking due to colder-than-normal weather and Erdoğan has sought to take on Russia over the Ukraine issue.

The halt declared by Iran has led to widespread power rationing. Turkey’s state pipeline operator Petroleum Pipeline Corporation (BOTAŞ) ordered gas-run power plants to cut consumption by 40%. Natural gas distributors too, have been asked to reduce supply to 60% for large consumers except for gas used for heating.

Erdoğan’s Turkey is just facing a small consequence of needling Russia. On Thursday, the Turkish President had warned Russia against invading Ukraine. He called the former Soviet Republic a “powerful” country with many international backers.

Erdoğan was punching way above his weight and even talked about his desire to discuss rising tensions with Russian President Vladimir Putin.

And then he made an unusual remark. The Turkish President said, “You cannot handle these things by saying ‘I will invade something, I will take it’.”

Really, should a Turkish President say this? Turkey has a history of leading brutal invasions. Only in 1974, Turkey had invaded Cyprus. Today, Turkey keeps trying to grab more and more territory in the Eastern Mediterranean by bullying Greece and Cyprus. In 2020, Turkey sent in mercenaries to help Azerbaijan invade the Nagorno-Karabakh enclave in a war against Armenia.

Read more: Cyprus has an old grudge against Turkey, US is empowering it to vent it out

Erdoğan, who backs Ukraine’s NATO ambitions also, said, “I don’t see Russia’s invasion of Ukraine as a realistic option because it is not an ordinary country. Ukraine is a powerful country.”

Erdoğan has been playing with fire for quite some time now. It has been constantly troubling Russia with its actions on the Ukraine front.

Ankara has even supplied combat drones to Ukraine. Russia fears that the drones could be used by Ukrainian forces in their years-long conflict in two regions of its Russia-backed separatist east.

The Putin administration even asked Turkey to ensure that Kyiv doesn’t use combat drones. But Erdoğan refused to take up the responsibility.

Instead, the Turkish President has been preaching to Russia about things like war and peace. He said that Russia “should review the state of affairs in the world and its own state of affairs before deciding to take this step” to invade.

Erdoğan also said, “We need to rip war out of political history.”

The Turkish President is very close to crossing the dangerous red line of Russian patience. Moscow has already given a short trailer of what it can do by using its influence to turn off the gas supply to Turkey. If Erdoğan doesn’t stop, Russia could come up with some more powerful measures to make Ankara pay for its Ukraine misadventure.

CCP at the cusp of a mutiny as Jinping purges 627,000 officials in a single year