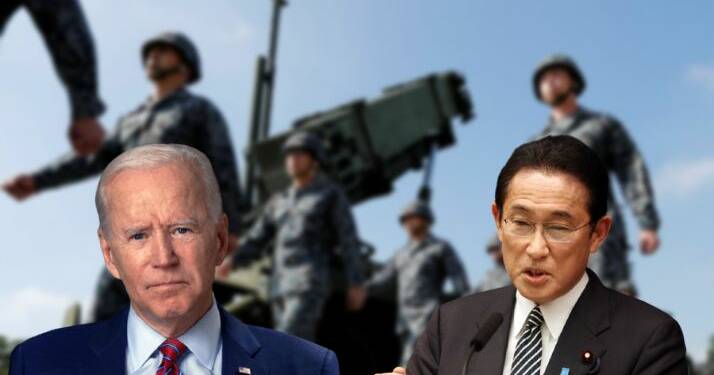 If there is a country, which knows and understands how devastating a nuclear attack can be, it has to be Japan. During World War II, it was Japan that suffered two atom bomb attacks that flattened Hiroshima and Nagasaki. However, you cannot afford to be stuck in anachronism all the time and Tokyo must respond to contemporary security challenges even if that means acquiring nuclear warheads. Japan remained a pacifist, non-conflict seeking nation for a long. But it has undergone significant changes. Now, it is an anchor of democracy and international laws in the Indo Pacific and is by far the biggest China hawk around.

But you see, Japan is constantly being preached to. By who, you might ask? By U.S. President Joe Biden. Joe Biden, as it turns out, is a dove of unprecedented proportions. He is afraid of a good fight. He seems to think there are amicable, peaceful and mutually-benefitting resolutions to all of the world’s conflicts, especially those involving China. But then, as an 80-year-old, Biden’s mental faculties have been failing him regularly.

U.S. President Joe Biden and Japanese Prime Minister Fumio Kishida agreed in a virtual meeting on Friday to boost cooperation on pressing economic and security issues, including China. In China, the two leaders agreed to “push back” against its aggression and intimidatory practices. The two leaders, during the 80-minute talk, spoke about China, Russia, North Korea and ways to boost economic cooperation.

Yet, the highlight of the meeting was when Japanese Prime Minister Fumio Kishida raised to Biden concerns about nuclear security and the idea of achieving “a world without nuclear weapons.” In recent months, it has been seen that Biden has quietly been upping his anti-nuclear weapons and energy rhetoric. This, at a time when China is continuously proliferating its nuclear capabilities.

So, the message from Japan is clear – unless China and its proxy states like North Korea and Pakistan are tamed, nuclear weapons cannot be removed from the face of the earth.

Joe Biden is trying to please China here. By disarming all of China’s enemies of their nuclear capabilities, the Democrat president will pave the way for a Chinese nuclear monopoly over the world. Here’s the thing: the United States and its nuclear allies might abandon nuclear weapons and they might even get Russia to reduce its stockpile – but if Biden thinks he can convince China to eliminate nuclear weapons, he’s an even bigger fool than we originally thought.

Japan knows China needs to be confronted in all possible ways, including with the nuclear deterrence option. It makes no sense for some morally overburdened countries to abandon nuclear weapons when the world faces a glaring threat in the form of China. This is the firm message that Japan’s Kishida has given to Biden.

Japan can go nuclear very soon. It might take only six months for Japan to produce a nuclear bomb by some estimates. Already, Japan has traditionally allowed its main rivals- North Korea and China, to believe that it is a part of the nuclear club and a near-nuclear state with a “bomb in the basement”. Japan’s “bomb in the basement” is believed to be strong enough for China to demand that Tokyo gets rid of its plutonium stockpile.

As per a 2014 CNBC report, a senior government official associated closely with the country’s nuclear energy programme said that Japan could build nuclear warheads since it launched a plutonium reactor and a uranium enrichment plant almost 30 years ago. Presently, Japan has a surplus of 47 metric tons of plutonium. This is sufficient to produce as many as 5,000 nuclear warheads.

Read more: Biden gives a nuclear pass to China with a ‘no first use’ gift

The official said, “Japan already has the technical capability, and has had it since the 1980s.” He explained that as soon as Japan had more than five to 10 kilograms of plutonium, it had crossed the nuclear threshold and the amount needed for a nuclear weapon.

It is strongly believed Japan is going to acquire nuclear-powered submarines very soon. That really will mark the beginning of Tokyo’s nuclear rally to counter China.