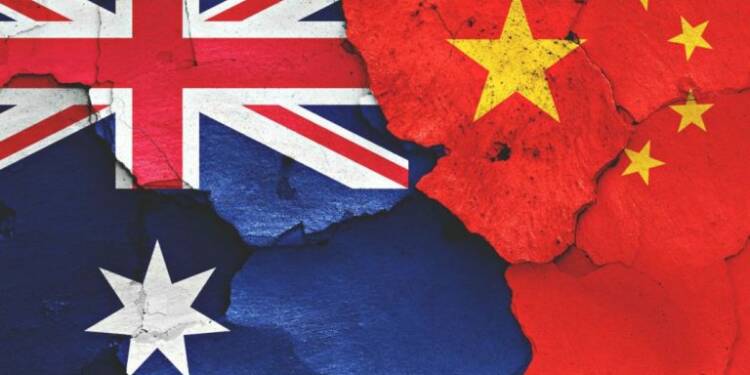 France is leading what can be called an anti-China crusade in Europe. Under the presidentship of France and President Emmanuel Macron, the European Union has dragged China to the World Trade Organisation and has decided to fight the red-rogue nation there. All of this, while France led EU is threatening to slap sanctions on China. On Thursday, the EU launched a challenge at the WTO accusing China of discriminatory trade practices against Lithuania that it says threaten the integrity of the single market. The European Union has really abandoned its dovish policy of China appeasement since France took over its reins.

Now, China is being bruised left, right and centre by the intergovernmental bloc. And guess who is joining the fight alongside the European Union? The Down Under country of Australia – which for several months has been kicking Beijing in the shins, has proposed that it be allowed to join the EU’s fight against China at the WTO.

The Australian trade minister announced on Saturday that Australia will seek to be included in consultations over a trade dispute between the European Union (EU) and China. In a statement, minister Dan Tehan said, “Australia has a substantial interest in the issues raised in the dispute brought by the European Union against China… and will request to join these consultations.” He added, “Australia opposes the use of economic coercion and discriminatory and restrictive trade practices which undermine the rules-based international trading system and cause economic harm.”

China has been dragged to the WTO by the European Union after it unilaterally downgraded diplomatic ties with Lithuania and pressured multinationals to sever links with the Baltic nation. Furthermore, China has stopped clearing Lithuanian goods through Chinese Customs. It has been rejecting import applications from Lithuania and is also pressuring European firms to remove Lithuanian content from supply chains when exporting to China.

With a population less than that of the smallest second-tier Chinese city, Lithuania has defied China’s warnings by allowing Taiwan to operate a representative office in Vilnius, which is the Lithuanian capital. Lithuania has already announced its withdrawal from the 17+1 group, which brings together 17 East and Central European countries and China to support Xi’s neo-imperial Belt and Road Initiative. Lithuania also recommended users avoid Chinese mobile phones after its defence ministry discovered that they had built-in censorship capabilities.

If there is one country that has set an example for the world when it comes to braving China’s economic onslaught, it is Australia. The best part is that Canberra has been emerging victorious against China’s offensive, and has been defeating Beijing at its own game. Therefore, if a country like Lithuania faces a similar threat from China, it is only natural for Australia to be roped into the equation to put up a united front against Beijing.

Australia’s successful braving of Chinese economic warfare for more than a year has made it a highly sought-after partner for democratic powers worldwide. For instance, Japan has inked a major security pact with Australia on the sidelines of a bilateral summit held between both the nations. The AUKUS initiative showed how the US and the UK are also interested in elevating security ties with the Kangaroos.

Most recently, the EU itself made its intentions clear to seek Australia’s help for countering China’s Belt and Road Initiative (BRI). Last month, the EU had unveiled its $470 billion “Global Gateway” plan to rival Beijing’s BRI ambitions. This ‘Global Gateway’, which is slated to become a challenger to China’s BRI, will have much to do with Australia.

Senior EU officials Josep Borrell and Jutta Urpilainen were recently quoted as saying by the Sydney Morning Herald that the EU’s infrastructural plan will bring Brussels and Canberra together. They believe that the relationship between the EU and Australia is in “good health,” and the Global Gateway will further help the two countries strengthen their relations.

Now, Australia has also offered to assist the European Union at the World Trade Organisation in order to take on China. Even though the WTO fight might take years before getting resolved, for Australia to be willing to become a participant in it shows how the country has become a pillar of anti-China activism around the world.

18 Best Cold hearted Quotes that you can share online

Best Machine Quotes that you can relate