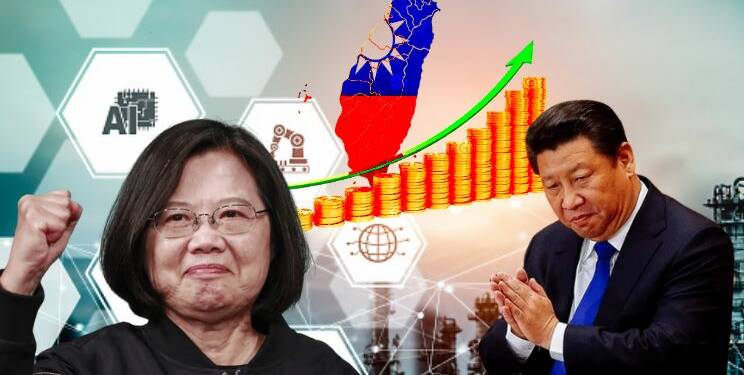 Taiwan is an asset for the world. Taiwan’s most formidable weapons are not big. They are not ones which have any military links. In fact, Taiwan’s most potent weapon against China is its economy. Taiwan has increasingly been engaging with the world. From a country with which less than a handful countries had unofficial relations, to now, becoming a major trading partner of several nations – Taiwan has come a long way. And a lot has changed since 2016, which was the year when President Tsai Ing-wen took charge of the island nation. Today, she has created an extremely powerful deterrent against a possible Chinese invasion.

President Tsai Ing-wen has been working on a concept called the ‘New Southbound policy’. Under this policy, Taiwan works to enhance cooperation and exchange between Taiwan and 18 countries in Southeast Asia, South Asia and Australia. In 2020, the Taiwanese President reiterated the significance of the policy, saying, “Taiwan helps Asia, and Asia helps Taiwan.”

Tsai Ing-wen explained, “The New Southbound Policy is Taiwan’s regional strategy for Asia. Its goals and ideals coincide with those of the Association of Southeast Asian Nations (ASEAN) Outlook on the Indo-Pacific and India’s Act East Policy. Working together, these initiatives can achieve mutual benefits with complementary economic and social successes.”

Meanwhile, Taiwan achieved another milestone in 2021. Taiwan-U.S. trade topped $100 billion in 2021 for the first time. Now, Taiwan ranks as the USA’s eighth largest trade partner, and it is the highest rank for Taipei since 2006. Taiwanese trade with the United States was up 24.87% through November. According to Forbes, U.S. exports to Taiwan have increased 16.58%, while imports have increased 27.59% which is slightly faster than the U.S. average of 21.40%. The U.S.’ trade deficit with Taiwan, meanwhile, has tripled in the last five years, from $12.54 billion to $36.60 billion.

Taiwan’s Interests will be Protected by the Democratic World

Taiwan has not been increasing trade ties with the democratic world just for the sake of it. There is an entire economic theory at work here, which will be brought to use in the event of a Chinese invasion of the island nation. I am talking about the ‘economic complex interdependence’ concept. This concept was put forward in the 1970s, and describes how emergence of economic complex interdependence has created dependency among states.

You see, Taiwan is not an ordinary country. Taiwan is a semiconductor superpower. Without Taiwanese semiconductors, the world will practically shut down. Economies will collapse and entire civilisations will be reduced into nothingness. Taiwan’s semiconductors power the world. Something like 75% of the world’s integrated circuit manufacturing capacity is based there. When it comes to the most advanced fabrication technologies, Taiwan outshines even the U.S. today – for example, 92% of the world’s capacity for the manufacturing “nodes” of 10 nanometers and below, is currently located in Taiwan.

Much of Taiwan’s exports to the world are electronic in nature. This creates a problem for China, which itself disproportionately depends on Taiwan for semiconductors. So, the first deterrent would be China’s own interests getting imperilled if it decides to invade Taiwan, because Taipei will most likely destroy its microchip facilities and all related technologies in the event of a Chinese invasion. China’s economy – deprived of semiconductors, will subsequently fall to its knees.

Secondly, the world depends on Taiwan. Especially the 18 countries falling under the ‘New Southbound’ league, the United States and its allies – they all have strategic interests at stake and need to ensure that Taiwan remains free and sovereign. If they do not ensure the safety of Taiwan, the trade imbalances created in the global supply chains by the fall of Taipei to Beijing will inflict severe costs on the economies of such nations.

Therefore, China is faced with the Taiwanese economy bomb. In a rather short span of time, Taiwan has made a mark for itself in the global economy. Today, it is a critical trade partner for many democratic nations. That status will be acting as a shield for Taiwan, as China will face the collective might of the democratic world if it decides to undertake any misadventure against Taiwan.