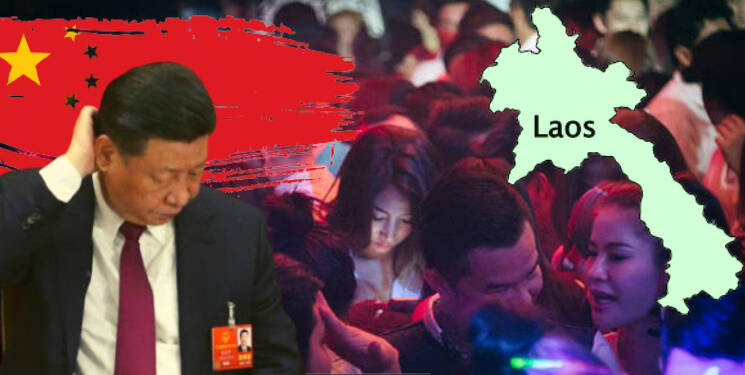 China has faced a massive blow in Laos. Police in the Southeast Asian country has rescued over a dozen women from the Chinese-run Golden Triangle Special Economic Zone (SEZ) in Northwestern Laos. This is the same region that China had developed into a bustling hub for sex trade and prostitution.

For China, the Golden Triangle Special Economic Zone (SEZ) was sort of its colony in the Southeast Asian country. It thought that it could do anything here including trade-in Lao women, with utter disregard for the Southeast Asian nation’s laws. But Laos isn’t tolerating China’s cruel behaviour any longer.

Local authorities reportedly rescued six women on February 5 and 6, after complaints were filed with the police.

Eight others ran away from the Chinese-run SEZ on January 20, after escaping through a fence. A police officer from Bokeo province, where the Golden Triangle Special Economic Zone (SEZ) is located, told RFA, “We rescued three women yesterday and the day before we rescued another three women.”

The police officer added, “These six women formally asked us for help; therefore, we could go into the SEZ and help them get out. Most of them worked as chat girls or sex service providers.”

Inside China-run Golden Triangle Economic Zone next to the Mekong River in far northern Laos, hundreds of young women from neighbouring countries come to look for jobs. They are hired by Chinese employers. For some time, they are made to sell shares to casino patrons.

But then, they are debt-trapped. These women suddenly find themselves under a mountain of debt. It is here that China swoops in.

In the present case also, the rescued Lao women had gone to the SEZ after they were promised lucrative jobs as “chat girls” who recruit investors online or as barmaids.

Lao women are particularly affected by the sex trade in the China-run SEZ. The confinement of Lao women in the SEZ is an old issue now. As per RFA, the police officer from Bokeo province said that his department rescued 40-50 women from the SEZ even last year.

The situation is rather bleak. Authorities and the women who escaped from the SEZ in Bokeo province say that they are still trapped by their employers, and they are wanting and waiting to get out.

But a Bokeo province official said, “It’s difficult to rescue women from the SEZ because the zone practically belongs to the Chinese.” The official added, “Outsiders have no right to be there. The women and their parents or relatives must work with us so we can come to rescue them.”

China has literally used its influence in debt-trapped Laos to build its own fiefdoms. However, Lao authorities are now breaking the shackles and rescuing Lao women from the CCP’s clutches.

How trapped women escape from the Chinese-run SEZ?

One of two women from Vientiane who escaped from the Golden Triangle SEZ narrated her ordeal to RFA and said that they were recruited as barmaids but ended up getting forced to work as prostitutes.

Since the authorities couldn’t barge into the Chinese-run SEZ and save them, a Bokeo province special task force suggested that they plan an escape through the shortest possible exit route. Risking their lives, the two women decided to find their way out of the China-run sex city. The woman who spoke anonymously to RFA said, “If we had been caught while escaping, we would be dead.”

Six other women who worked in some other building in the same SEZ escaped on the same night and were similarly rescued by the authorities.

So, local authorities have found a way to rescue Lao women confined in the China-run SEZ. They cannot directly enter the Chinese-run facility but they won’t let the CCP trade Lao women on Lao territory any longer.

Laos has finally realised that China is harassing it. First, China debt-trapped Laos. Then, it blocked Mekong water into the Southeast Asian country, stealing its fish and water. But Laos didn’t react. However, the country has drawn a line when China started stealing the honour and dignity of Lao women.

Now, with the news of Lao women resisting the CCP, the people of Laos might just rise against the Communist nation and kick it out of their country for good.
Tags: BokeoCCPChinaExhaustive ReadLaosSEZ
ShareTweetSend
Previous Post