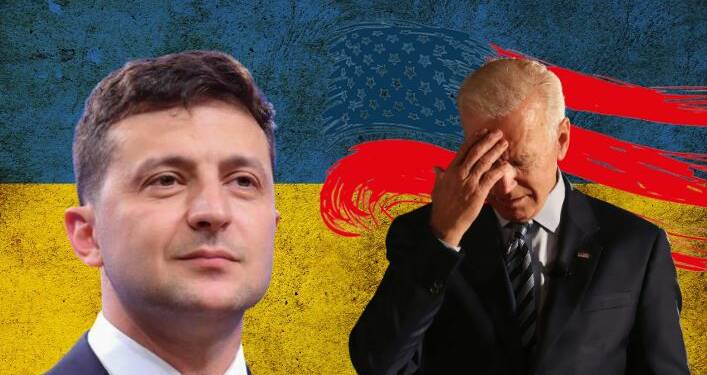 Russia is upping the ante on Ukraine. Russia has moved long-range artillery and rocket launchers into firing position, along the Ukrainian border. Satellite images, meanwhile, show Russian troops moving into “attack positions”. All this while, these troops were not in attack positions. Such moves on the part of Russia have evidently woken Ukrainian President Volodymyr Zelensky from his slumber. Until now, he was focussing his entire energy on reassuring Ukrainians and the world at large that a Russian invasion was not imminent.

But the United States and West then came up with a definitive date of a possible Russian invasion: February 16 and any day before the current month ends. Markets in Asia and around the world felt the tremors, as a looming gas and energy crisis faces the world in the event Russia invades Ukraine.

Before becoming President of Ukraine, Volodymyr Zelensky was a comedian. Today, he has become a clown. That is part of the reason he has chosen to play a prank with Joe Biden for putting Kyiv in a precarious situation, especially an economic one.

Volodymyr Zelensky on Sunday invited US President Joe Biden to visit Kyiv to show Washington’s support in the face of a feared Russian invasion. During a phone call with Biden, Zelensky said, “I am convinced that your visit to Kyiv in the coming days… would be a powerful signal and help stabilise the situation.”

According to a Ukrainian official quoted by CNN, upon being invited to Ukraine, there had been no positive response from Biden. US officials said a trip by Biden to Ukraine is extremely unlikely. Ukraine won the narrative battle against Washington here. It exposed Biden for not actually being committed to Kyiv, and merely warmongering and creating hysteria from a thousand miles away.

Meanwhile, the Biden administration has sent close to 3,000 additional troops to Poland. The additional forces are meant to reinforce U.S. forces in the southeastern part of Poland. Over the last two weeks, Joe Biden has moved troops, naval ships and warplanes into eastern Europe. However, these forces are only meant to antagonise Russia even more than it already is. Such man and firepower are no match for the Russian deployments on Ukraine’s borders.

Read more: Three possible scenarios if military escalation goes out of control on the Ukraine-Russia border

There is no way a few thousand American troops can protect Ukraine against an invasion of close to 120,000 Russian troops, accompanied by what is predicted to be an unsparing aerial assault. So, what does Biden want to achieve by sending such troops to Ukraine’s neighbourhood? It’s simple: he wants to make an invasion of Ukraine a necessity for Moscow. Biden is trying to stoke war in Eastern Europe, to help mint cash for his masters in the American military-industrial complex.

Ukraine’s Ambitions of Self-Destructing Itself

Volodymyr Zelensky’s move to invite Biden was a smart one. It exposed Joe Biden as a person who does not want to resolve the crisis in Eastern Europe, but instead, wants to exacerbate it. But Zelensky has himself got it all messed up. His strategies during this crisis reek of indecisiveness and immaturity. Kyiv is continuously playing down the threat it faces.

Russia is said to have deployed 60% of its ground combat force on the borders of Ukraine. If an invasion does happen, it will not be minor. Putin will go for the jugular. Such deployments are not meant for minor operations. If it happens, the invasion will consume Ukraine.

Ukraine, meanwhile, has to be the most confused nation around, run by an even more confused clown. It accepts January 16 as the day of invasion, then backtracks. It plays down the threat, and then panics the next moment.

The fundamental issue with Ukraine is that it has not quite understood the situation it is in. It is ignorant. It is ready to fight and fire up the Russians, but is also saying the threat is not significant enough. Why the hell is it moving S-300 systems to the border then?

Ukraine needs to recognise that the threat of invasion is real and not just a figment of the West’s imagination. Is Joe Biden a warmonger? Yes. But Russia is indeed looking to secure its interests in Eastern Europe – using brute force if necessary. The bulk of Zelensky’s focus, strangely, is on ensuring calm. As a result, he is downplaying the threat on an invasion, even while Russia has made it clear that it will take unspecified “military-technical” actions unless a series of demands are met, including promises from NATO never to admit Ukraine and to withdraw forces from Eastern Europe.

Ukraine needs to realise that the solution to the current crisis is in it talking directly to Moscow, and completely removing NATO and Washington from the picture. Kyiv needs to open direct lines of communication with Vladimir Putin’s office, and only then can a meaningful, bilateral resolution be achieved. Of course, Kyiv will have to make concessions, but it might just save a lot of bloodshed.