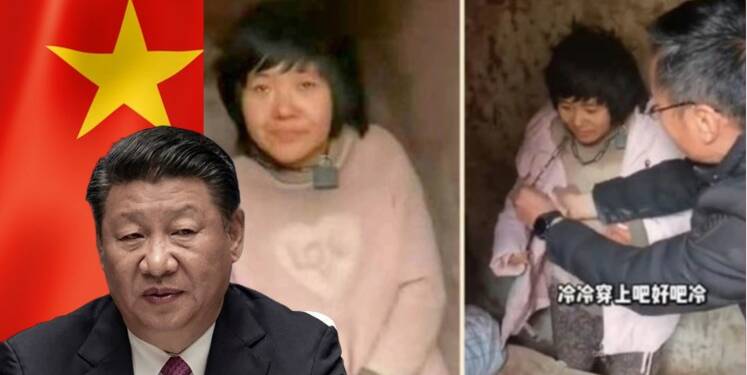 Recent video footage of a mentally ill lady imprisoned by her husband, shackled by her neck and locked up all day in a dismal shack, has sparked indignation in China. Yang, a mother of eight, was dressed in shabby clothes and huddled for warmth in a village in Feng County, Xuzhou, Jiangsu province, amid frigid winter temperatures.

Local authorities ultimately agreed that Yang’s case was an instance of human trafficking after a series of denials. According to the BBC, the man claiming to be her husband has been charged with “illegal detention.” Women’s security has not necessarily improved as a result of China’s economic progress and openness. Human trafficking is still rampant in China today, with foreigners becoming victims.

Women trafficking is most likely a result of gender imbalance or “missing girls” in China, which originates from the country’s decades-long one-child policy and preference for males, according to demographers. China’s one-child policy began in 1980 after the country’s population grew from 540 million to 969 million between 1949 and 1980. Authorities claimed it was a critical role in the country’s economic growth.

Family planning for the masses and human trafficking

Other countries’ family planning programmes were designed to encourage parents to have as many children as they wanted. The Chinese ones, on the other hand, were subject to tight government monitoring and mandated interventions, such as fines for offenders and, in some cases, forced abortions. With a few exceptions, the policy limited most couples to having only one child. If they had more than one child, however, civil servants and employees of government-affiliated organisations, such as universities, risked losing their employment.

Human trafficking is described as the trade of people for the purpose of forced labour, sexual slavery, or commercial sexual exploitation for the benefit of the trafficker or others. It may also include giving a spouse in the case of forced marriage, as well as the extraction of organs or tissues, such as for surrogacy or ova removal. With the CCP’s involvement, the situation in China becomes far more difficult, according to this broad definition.

According to figures obtained by Chinese non-profits, including WRIC, an estimated 70,000 children are taken each year, not including those who are abandoned, according to women’s rights activist Yao Cheng. The children were sold as child brides (to be married to a family member when they reach the appropriate age), prostitutes, and even organ donors.

Read More: China is fast turning into a country of rogue criminals. All thanks to its One-Child Policy

According to Fox News, the China Tribunal panel—which was established by the International Coalition to End Transplant Abuse in China (ETAC), an international human rights charity—announced its final findings in June after a year of impartial evaluation of all available material. The tribunal noted that “extraordinarily short waiting times for organs to be accessible for transplantation” existed, and that many websites offered hearts, lungs, and kidneys for sale, implying an on-demand economy.

Article 241 of China’s Criminal Code “criminalised the purchase of abducted women or children and imposed a maximum penalty of three years’ jail, short-term incarceration, or controlled release,” according to a recent report from the US Department of State.

“The penalties under this provision were insufficient on their own; nevertheless, Article 241 provided that if a person acquired an abducted woman or child and subsequently subjected her to “forcible sexual relations,” they would face further penalties under the criminal code’s rape provisions.” So far, the law exists and punishes offenders to some extent, but it is ineffective if no one notices or cares about the crime.

All in all, at the end of the day, the rules are for the masses, while the CCP elites are allowed to circumvent the laws and use human trafficking as a tool to satiate their desires. Be it making them baby-making machines or organ factories.

What Does FS Stand For? Definition and Explanation