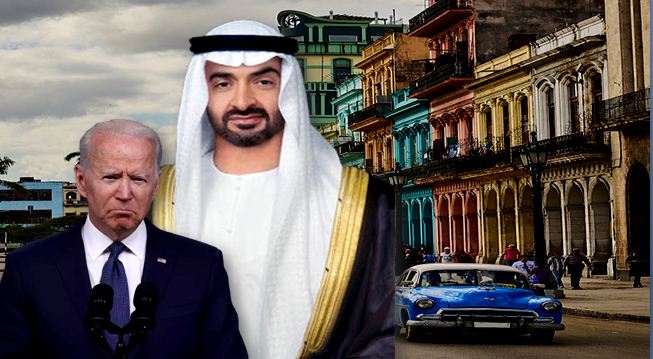 Despite the recent attacks on allies like UAE and Saudi Arabia, the US has shown no interest in punishing the  Houthis. The Biden administration has ignored the warnings issued by its allies and has now given a free hand to the Houthi rebels in Yemen. The rebels are ramping up drone and missile attacks against the partners of the US in the region which includes the United Arab Emirates, Saudi Arabia, and Israel. This has forced the trio to call out the US government to reverse its decision and add Houthis back into the US terrorist organizations blacklist.

It seems that the UAE has finally got to believe the soft stance of the Biden administration towards Houthis and has decided to take charge in its hand. As a consequence, UAE is currently seen tilted towards the US adversary nation of Cuba.

The United Arab Emirates capital city has shown an interest in doing business with Cuba. The Abu Dhabi Chamber of Commerce and Industry chairman Mohamed Al Mazrouei met with the president of the Cuban Chamber of Commerce Antonio Carricarte Corona at the Expo 2020 Dubai. Mazrouei noted the eagerness of Abu Dhabi businesses to learn more about trade and investment in the Caribbean country.

He also called for business-focused exchanges between the two countries in the areas of trade, commerce and investments. The chairman also said that the chamber is ready to support trade between Cuba and the United Arab Emirates. Many other Emirati entities and enterprises are also showing interest in joining hands with Cuba. Yesterday, Cuba’s Trade Minister, Rodrigo Malmierca Diaz, met with the officials of the Abu Dhabi-based renewable energy company Masdar to discuss potential cooperation.

The US – Cuba relations

The United States has imposed several commercial, economic, and financial embargos on Cuba, making it illegal for US corporations to do business with the communist nation. The relationship between the two countries for very long has been mired in conflicts. Every subsequent US government has had one or other kind of hitches with the communist regime in Cuba.

In 2019, the Trump administration again announced new restrictions on American travel to Cuba. Since taking office in 2021, the Biden administration has been labelled as “tougher than Donald Trump on the island’s government”.

Read More: A new Cuba is rising. The world is elated. But Biden and old Democrats are enraged

UAE’s indirect message to the US

Albeit being a close ally of UAE, the US is ignoring the threat put forward by the Houthis against UAE in this region and is also giving a blind eye to the legitimate concerns raised by its close ally partners.

The recent tilt of the UAE towards Cuba acts as a warning sign to the US. It’s a plain and clear message that if the US can’t stand with its allies in their fight with the fundamentalist Houthi rebels, its allies will also ignore the US interest and will have their way forward, which is happening by UAE’s latest bonhomie with Cuba.