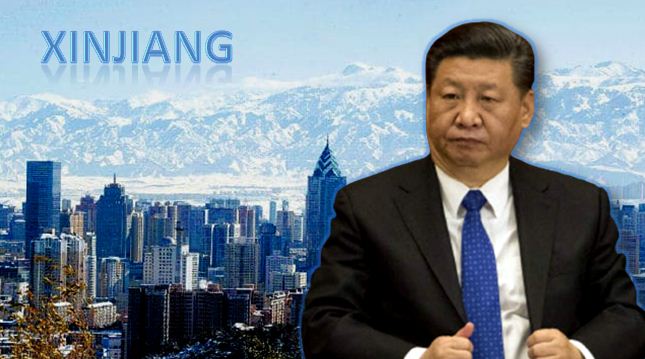 You might have passed through what China is up to in Xinjiang, with all the reports of torturing, tormenting and the helpless cries that seep through the hellacious hedges of the concentration camps.

But why is China so obsessed with Xinjiang? Well, the answer lies in geography, China’s historical threat perception psyche and its current challenges.

Xinjiang has a very captivating geography and location. And there are two major factors at play here.

So, Xinjiang has always been pivotal to China from the perspective of trade ties with East and Central Asia. In the ancient era, it linked the Indian and Chinese civilisations. And straight to now, it is connected to Central Asia through highways and railways. If Beijing has to maintain good trade ties with all such key neighbours, it needs an iron-fist rule over Xinjiang. And  China achieve that through concentration camps, forced abortions, coercive sterilisations, organ harvesting and extreme levels of surveillance.

Read more: ETIM is all set to launch massive strikes on Chinese assets all across Pakistan and Central Asia

But for China, Xinjiang is not just about money and trade. In Beijing’s strategic circles, China is wary about its internal and external security threats. And this goes way back to 200 BC when scientists assumed work on the megastructure called the Great Wall of China under the rule of the Qin dynasty.

Ancient Chinese rulers and dynasties didn’t spend over a thousand years building, improving the colossal structure out of sheer architectural interest. It was supposed to create a barrier against external invasions. Chinese rulers had a typically land-based threat perception when it came to securing internal interests. And there is a reason why. All big invasions like the Mongol conquest, the Japanese invasion, the Russian invasion into China had their roots in Manchuria, Mongolia or the Gobi desert.

China never faced a maritime threat in its history and has always suffered invasion by ground armies. So, it went as far as fortifying its land borders with the greatest structure in human history- the Great Wall of China. And even within its land borders, China isn’t as obsessed with Tibet because the Indo-Tibet border is a natural boundary and India isn’t going to indulge in military adventurism. All China is worried about is Inner Mongolia, Manchuria and above all, Xinjiang.

It is, in fact, amazing how Beijing continues to see a threat via the Gobi desert since the ancient era.

Read more: It’s Russia vs China in Central Asia, Kyrgyzstan puts Putin and Jinping on a sure shot collision course

And there is a bigger threat too- the East Turkestan Independence Movement (ETIM) that wants to free Xinjiang from China and create an independent state in the region.

China constantly fears that the ETIM, which is closely linked to the Taliban and comprises mostly of Uyghur Muslims, will use the barren terrain of the Afghanistan-Xinjiang border and create a huge security threat in Xinjiang and other parts of China. A reason why Beijing coordinated with the Taliban.

China’s obsession with Xinjiang is thus rooted in its geography, terrain and its strong apprehension of a land-based threat.