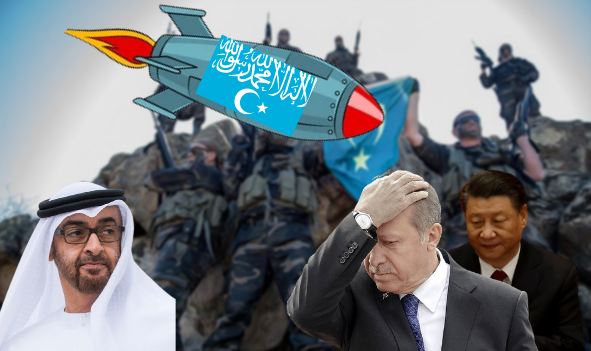 Ties between the United Arab Emirates and Turkey appear to be blooming. Relations between the two countries have been rocky for quite some time, especially after the attempted coup against the Turkish president and wannabe Khalifa, Recep Tayyip Erdogan, whose blame was pinned on UAE, among others. For some time now though, Turkey has been trying to mend its ties with the Arab world.

Amid a freefalling economy and a currency that has nosedived, Turkey is looking to secure some major investments, and the United Arab Emirates seems keen to play ball. However, the UAE has set the ball rolling on a major game, with potentially devastating impacts on China.

On Wednesday, UAE’s crown prince and powerful de facto ruler, Mohamed Bin Zayed paid a visit to Turkey and met Erdogan. The last visit to Turkey by MBZ was in 2012. So, the latest visit was indeed significant. One outcome of the talks was the UAE’s establishment of a $10 billion fund to support investments in Turkey, including in key areas of energy, health and food. But there seems to have been another outcome, albeit unpublicised and highly secretive.

The East Turkestan Islamic Movement is a militant organisation, which seeks to fight against Chinese excesses and abuse of human rights in the Xinjiang province. The ETIM comprises of Uighur fighters, who have one goal in their lives – to liberate Xinjiang from the clutches of the Chinese Communist Party. China’s abuses against Uyghur Muslims hardly requires an introduction. Forced labour, organ harvesting, human trafficking, sex slavery – China is doing all of it in Xinjiang province, home to the country’s Turkic minorities.

Turkey has raised the cause of Uyghur Muslims as mere tokenism. Until recently, it did not mean anything of what it said against China, as it did not want to alienate Beijing. But now, the UAE seems to have changed Turkey’s mind. Therefore, Turkey has come up with a Turkic council that could end up empowering the ETIM, and possibly, many other organisations like it.

According to the South China Morning Post, the Cooperation Council of Turkic Speaking States, also known as the Turkic Council, has changed its name to the Organisation of Turkic States (OTS), which some view as boosting unity between them. The group includes Turkey – which is home to its general secretariat, in Istanbul – Azerbaijan, Kazakhstan, Kyrgyzstan and Uzbekistan, along with observer states Turkmenistan and Hungary. In its report, SCMP seemed to shoot off a warning to China, saying the OTS could spell trouble for the Chinese Communist Party, especially in Xinjiang.

Read more: China’s number one Enemy ETIM is back and more powerful than ever

According to Pan Zhiping, head of the Central Asian Studies Institute at the Xinjiang Academy in Urumqi, “The Chinese government needs to keep a close eye on what kind of engagement there may be between the OTS and the East Turkestan Islamic Movement, to see whether [the OTS] will become a platform of the Uygur Islamic extremist group.”

A subtle Saudi-Emirati competition underway is no secret. The United Arab Emirates wants to replace Saudi Arabia as the leader of the Muslim world. To do so, it must invest in an Islamic cause and deliver on it. The plight of Uyghur Muslims is one such front. While the UAE shoots from the shoulders of Turkey, it can convey to the Arab world how it helped strengthen the ETIM. Meanwhile, there would be nothing to prove that Abu Dhabi instigated Turkey to build a platform for Turks which would possibly be used to provide a stage to the ETIM. Therefore, ties between Abu Dhabi and Beijing would remain secure as well.

The strengthening of ETIM by the Organisation of Turkic States, meanwhile, could have disastrous effects for China, as its hold over Xinjiang would begin loosening. As for Turkey, it does not have a choice. If the UAE has gotten Ankara to up the ante on China over the Uyghurs issue, it will have to toe Abu Dhabi’s line if it wants its economy to stay afloat. MBZ, therefore, has set in motion a spectacular geopolitical game against China.