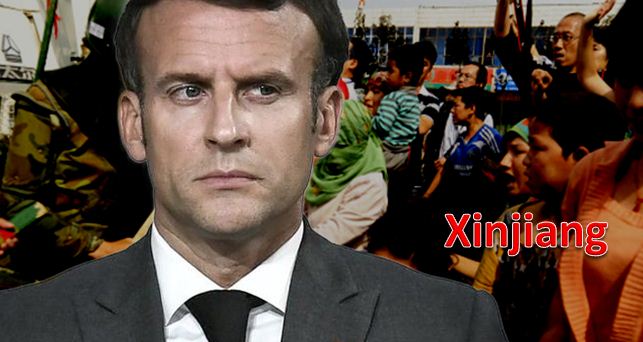 France, the current EU president, has been trying to usher in major reforms into the EU to make it more powerful, relevant and influential. France is at present engaged in a geopolitical tussle with China over the human rights and genocide issues in the Xinjiang region. Recently, France officially recognized China’s treatment of Uyghur Muslims in Xinjiang as Genocide. The recognition further tarnished an already worsening  China – France relationship.

Now it seems that France wants to push the EU against China and wants it to take strict actions against China’s forced labour culture.

Also Read: After US and India, the European Union now wants to destroy China’s BRI ambitions

EU’s plan to ban goods made in Xinjiang

In the latest, the EU has announced that it is going to develop a forced labour ban, where observers and governments allege the widespread use of forced labour in the goods and manufacturing sector based in the western Chinese region of Xinjiang. According to the new rules, large companies operating in the European Union will also be slapped with fines for human rights abuses in their supply chains. The legislation includes a total ban on the import or marketing of goods made using forced labour anywhere in the world.

Anna Cavazzini, a Green lawmaker in the European Parliament said, “The Commission should be ambitious and work on a proper import ban inspired by the model that exists already in the US and other countries so that we can stop products made with forced labour at our borders”.

The implications of the new rules

The new due diligence plan for supply chains will impose stringent reporting rules on big companies –  mostly those with more than 500 employees and a net turnover of over 150 million Euros (US$175 million). Non-European firms will qualify if they generate that same level of turnover in the EU market.

The threshold is set at 40 million Euros, for firms in “high-risk” sectors. Among these are textiles manufacturing, agriculture, forestry, fisheries, food manufacturing, and extractive industries, which include energy and metals. The legislation will affect 13,000 EU companies and 4,000 non-EU companies (most of which are Chinese), based on EU estimates.

Read More: China was playing the European Union for years, now the EU is playing China

For the Chinese firms, these may be difficult to monitor and comply with as Beijing has ratified only 20 of the 26 ILO conventions and has not adopted conventions on forced labour, freedom of association and collective bargaining.

It would truly prove to be a big blow to Chinese companies if these EU rules are rightly executed. Well, Macron being at the centre of EU policies, one can be damn sure that France will try its best to push a strict and proper execution of these rules and punish China for its evil deeds committed.

Now, Japan will control the world trade at its will