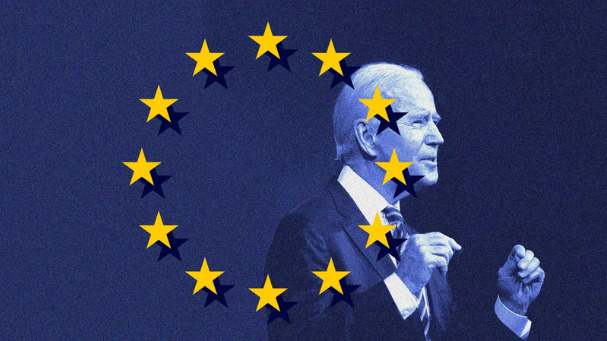 The EU is deceiving the US President. It is saying that it will ultimately stop using Russian energy. But it will take the EU five years to do so. So, it means Biden’s green agenda and anti-Russia campaign are getting muzzled in Brussels.

And guess what, even the 2027 promise doesn’t sound all that realistic.

European Commission President Ursula von der Leyen recently spoke about ending dependence on Russian energy. She said that EU leaders had agreed to spend the next two months on drafting proposals to end reliance on Russian oil and gas.

She said, “By mid-May we will come up with a proposal to phase out our dependency on Russian gas, oil and coal by 2027, backed by the necessary national and European resources.”

So, a loud and clear message is coming out of EU–Biden’s green agenda and anti-Russia agenda is going down the drain.

And this isn’t really a surprise. The EU has already made it clear that it will not join the US in banning Russian oil. EU leaders argue that the impact on households and businesses would be a bit too much to handle. A giant fertilizer company in Europe has already cut production due to soaring natural gas prices. So, they aren’t ready to hurt themselves even more by banning Russian energy imports.

So, the EU is not going to instantly shift to non-Russian sources of energy or shift onto green energy on an immediate basis. Despite Biden’s strong green agenda and anti-Russia campaign, the EU doesn’t seem to bother about his goals anyway.

And EU isn’t going to diversify

In fact, EU’s so-called diversification plans could very well become a déjà vu moment for the US. In 2014, Russia had annexed Crimea and there was predictable outrage in the West.

Even at that time, the US wanted to punish Russia. The EU too had promised to join Washington D.C. and promised to diversify its energy supplies away from Russia. But not much progress has been made so far. In fact, Germany, the biggest EU economy, remains the largest buyer of Russian energy. And Berlin kept working on Nord Stream 2 gas pipeline despite the Crimea annexation of 2014.

Read more: ‘I hate you like I love you,’ Germany’s weird relation with Russia has corruption and hypocrisy written all over it

Why EU cannot reduce its dependence on Russian energy?

Well, the honest answer is that the EU doesn’t want to reduce its dependence on Russian energy. It has actively built a massive energy infrastructure that is totally allied with Russian supplies. Nord Stream 2 gas pipeline, for example, is a project co-financed by German companies.

Read more: From LGBT rights to Nord Stream 2: Biden and Merkel are leading a colour revolution against ‘nationalist’ Poland

So, the EU will not harm its own business interests by banning Russian energy. In fact, German Chancellor Olaf Scholz too has only ‘halted’ the Nord Stream 2 gas pipeline project instead of cancelling it. This means Berlin can resume it whenever it wants.

Also, the EU is way too heavily dependent on Russian energy to diversify. It imports 40% of its gas, 27% of its oil imports, and 46% of its coal from Russia. Any move to annoy Moscow can lead to drastic consequences.

The Russian Deputy Prime Minister Alexander Novak has already said that Moscow can cut off gas supply via Nord Stream 1 pipeline. So, the EU is compelled to behave nicely with Moscow.

Also, the proposals coming from within the EU seem to make a mockery of Biden’s campaign against Russian energy.

Also, EU’s dependence on Russian coal is another constant pain in the neck. How will a shift from natural gas to coal help, when EU imports 46 percent of its coal from Russia?

Von der Leyen had another proposal—requiring underground gas storage facilities to be 90% full by the start of October every year. She said, “This will be our insurance policy against supply disruption.”

Alright, but how will EU fill 90% of its facilities every year? With Russian gas. So, the EU will keep buying Russian gas but secure strictly its own interests through bulk buying. This has actually got nothing to do with what Biden wants and is all about securing EU’s own future.

The EU is thus mocking Biden with its new proposal. It will keep beating around the bush but never really deliver on the Russian energy front.