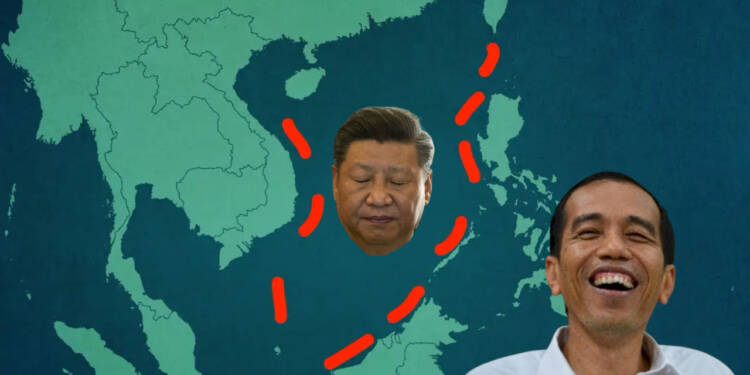 China goes around parroting bogus claims of it having ownership of over 90 percent of the 3.5 million-square-kilometre South China Sea. How does it make this frivolous and false claim? By citing historical records which the world and the International Court of Arbitration have soundly rejected. China claims the South China Sea as a historical extension of its own physical territory. However, the CCP’s claims are heavily contested by Southeast Asian countries, and now, Indonesia has come out to kick the nine-dash line theory out of the park for once and for all.

Indonesia is all set to turn its disputed Natuna Islands in the South China Sea into a special economic zone (SEZ) to reinforce maritime security and entice investment in the local fishing and tourism industries. According to a report by Nikkei Asia, making the Natuna Islands into an SEZ, the Indonesian government hopes to attract investment mainly from overseas companies to improve basic infrastructure such as fishing boats, port facilities and logistics.

Why China Will be Very Hurt

When international stakeholders, multinational firms from all over the world and other institutions will come up in the Islands after the development of a Special Economic Zone, it will become extremely arduous for China to undertake any misadventures in the area.

Read More: The Bill Gates connection behind the dire baby formula shortages in the US

Already, the Indonesian government has divided the Natuna Islands into several designations to stimulate the region’s economy. There will be at least six designations, including tourism, oil and gas exploration, fishing, and defense and security.

Establishing a defense and security zone will allow Indonesia to carry out military and coast guard drills in the area. The Nikkei Asia report added that Indonesia also plans to build a military base and other key defense facilities on the islands.

Late last year, Beijing demanded in December that Indonesia stop drilling for oil and natural gas north of the Southeast Asian country’s Natuna Islands. Why did it do so? Because China considers the Natuna Islands’ waters and the resources contained therewith as its own.

For the past five years, China has despatched large fishing boats into Indonesia’s exclusive economic zone (EEZ), often escorted by coast guard and maritime militia vessels, near the Natuna islands, which Beijing claims as part of its vast “nine-dash line.”

To counter China’s military manoeuvres in the area, Indonesia is tying up with the United States and other democratic powers. Last month, the Indonesian army announced that its forces and the U.S. military are expanding their annual bilateral ‘Garuda Shield’ exercises this year to 14 participating countries, including Australia, Canada, Japan, Malaysia, Singapore and the United Kingdom.

Therefore, the Garuda Shield exercises this year will be the largest ever conducted in Indonesia. They will also involve land, sea and air components focused on southern Sumatra and East Kalimantan but with plans also for an amphibious landing in the Natuna Islands.

With a special economic zone coming up in the Natuna Islands, Indonesia will not remain the only party to the area. In fact, the interests of major Western powers, including the U.S. will clash with China’s expansionist ambitions. Moving forward, China is in for a tough phase when it comes to dealing with Indonesia. The nine-dash line, for all practically reasons, has been blown away by Jakarta.