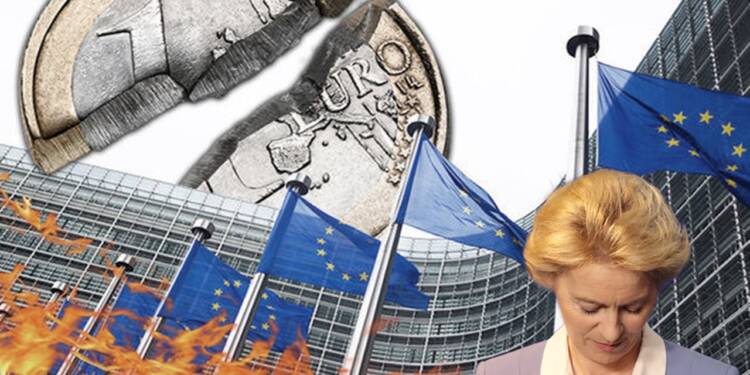 The Euro is falling. First, the 2020 financial upheaval bruised the world – complemented by the damaging effects of the pandemic. Then came the threat of war in Eastern Europe. Now, there is a war underway in Ukraine, and Europe is barely surviving as Russia continues to control its energy supplies to a great extent. European nations are slyly bypassing sanctions imposed on the Russian economy and making payments to Moscow for the oil and gas it is supplying in rubles. For the first time in 20 years, the euro is on the verge of U.S. dollar parity.

According to Bloomberg, the euro has already slumped to a five-year low near $1.03. In fact, the market has begun betting on the prospect of the dollar and euro hitting parity this year. Hedge funds are already betting on it. They’ve piled on $7 billion in notional value into options wagers on parity in the past month alone, making it the most popular trade among those looking for a further drop in the European currency.

Traditionally, since the start of the euro in 2002, the currency has remained stronger than the US dollar. However, both these currencies equalizing this year could spell the death knell of the once-powerful common European currency and force the EU to rethink its usage.

There are four major impacts that the fall of the euro could bring about.

The fall of the euro could force European Union member states to consider reintroducing their national currencies. No country wants to deal with a currency that does not serve its best interests. Essentially, Europe would enter an era of ‘redenomination’, where every country will dump the euro as a common currency and go on to revive their own currencies.

Such an exercise would entail adjusting present wages, prices, and other values to the new money on an approximately proportionate basis. EU member states would also be required to get the international value of their monies priced into the foreign exchange (forex) markets.

Needless to say, in the short term at least, the economies of all European countries would suffer.

Europe’s Open Borders Will Be Closed

The very foundation of Europe keeping its borders open from within is the presence of a common currency. The euro is what facilitates the seamless transfer and transportation of people, goods, services, and capital within the borders of the eurozone. The “Schengen Area,” named after the 1995 Schengen Agreement, is what comprises of the region where such free flow of people, goods, and money can take place.

The collapse of this free-for-all area, caused by the reintroduction of national currencies, would force European countries to implement border controls, checkpoints, and other internal regulations previously eliminated in the Schengen Agreement.

Businesses and investors have gotten used to an open Europe. The fall of the Schengen Area would negatively impact the ability of businesses to operate across Europe.

Impact on the World

The euro has stagnated Europe’s growth. The specific impact of the fall of the euro will only become clear with time. However, what the euro did provide was stability. Markets like stability. Therefore, in the short term, markets could react negatively and there could be a phase where the world desists from dealing with Europe.

With time, however, European nations will each play to their own strengths. They will get up on their own feet and fix their economies. The bondage of a common financial and economic market will not be pulling individual nations down, and so, in the long run, Europe could witness a period of great growth once again.

The world, ultimately, will react positively to a rising Europe.

The fall of the euro, European countries redenominating, and the collapse of the Schengen Area will all ultimately lead up to European nations framing independent financial and economic policies. The monetary authority will land back in the hands of national governments, instead of being controlled by Brussels.

According to Investopedia, the various exchange rates would change the relative values of some assets held internationally, and the workers in less-inflationary European job markets would see a relative income boost compared to European governments with loose monetary policy.

At the end of the day, the European Union was always an experiment. Indicators now suggest that the experiment is beginning to fail.

TOP 30 Love her but leave her wild Quotes and Captions