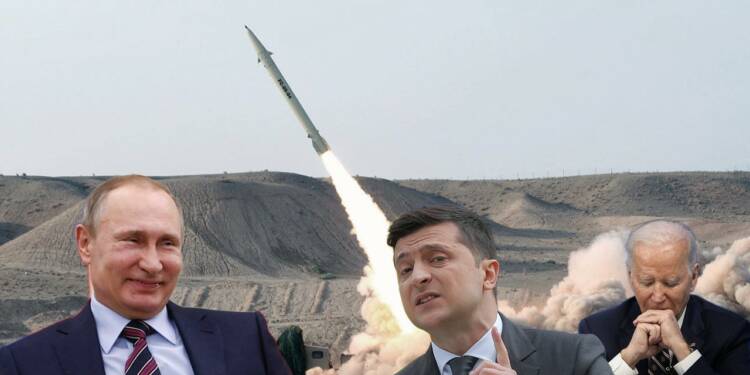 The US will unveil a new $700 million weapons package for Ukraine on Wednesday. The main highlight is however already out- Biden will provide Ukraine with advanced rocket systems capable of striking far-off Russian targets with precision.

Why is this development significant? Well, it can drag the US into a war that Biden has been trying to avoid thus far.

Biden gets duped by Ukrainian “assurances”

The advanced rockets system will be provided to Ukraine on the basis of “assurances” by the Zelenskyy administration that the American missiles will not be used to hit targets in the Russian mainland and their use will be restricted to the battlefield in Ukraine.

In an NYT op-ed, Biden wrote, “That’s why I’ve decided that we will provide the Ukrainians with more advanced rocket systems and munitions that will enable them to more precisely strike key targets on the battlefield in Ukraine.”

For Zelenskyy, convincing Biden to supply nger-range missile systems that can fire multiple rockets at long distances was turning out to be an uphill task. Ukraine however insisted that it would help it turn the ride in the ongoing war.

For Biden, supplying such a system to Ukraine that could strike Russian mainland was filled with danger. Any use of American systems by Ukraine on Russian territory could easily trigger an adverse reaction from Moscow and the next thing we know, the two biggest militaries in the world are locked in an armed contest.

Biden had himself said, “We’re not going to send to Ukraine rocket systems that strike into Russia.” For Ukraine, any such escalation isn’t a big deal because it has nothing to lose anyway but for the US, the stakes are evidently high.

Now that the US is supplying the advanced rockets systems to Ukraine, how could things pan out from here?

Let us understand this from Ukraine’s perspective. For Kyiv, there is only one way of defending itself in the war- dragging the US or the NATO into the ongoing war. This became clear from Volodymyr Zelenskyy’s frequent requests to the US and the European powers to do more to help Kyiv in the ongoing war. Kyiv wants them to either intervene directly or send in longer-range weapons to Ukrainian forces.

Now, if Biden sends in advanced rockets systems to help Ukrainian forces on the assurance that Kyiv won’t hit Russian mainland, it could actually lead to a disaster. Ukraine has assured that it won’t attack Russian territory. But what if it does? After all there is not much transparency about Ukrainian security agencies.

Read more: US diplomat reveals Biden was exploiting Ukraine’s miseries from day one

With organisations like Azov Battalion engaged in Ukrainian military operations, there is no guarantee on how American weapons systems might get used. Make no mistake, one such escalation could set in a chain reaction bringing the US and Russia at the brink of a military clash.

And what if Russia itself makes an issue out of US decision to equip Kyiv with long-range missiles? What if Russia itself claims that it has been attacked and starts taking counter-measures? Make no mistake, Ukraine has trapped Biden. Soon, the US and Russia could end up crossing swords and the consequences that follow could lead to a World War-III like scenario.