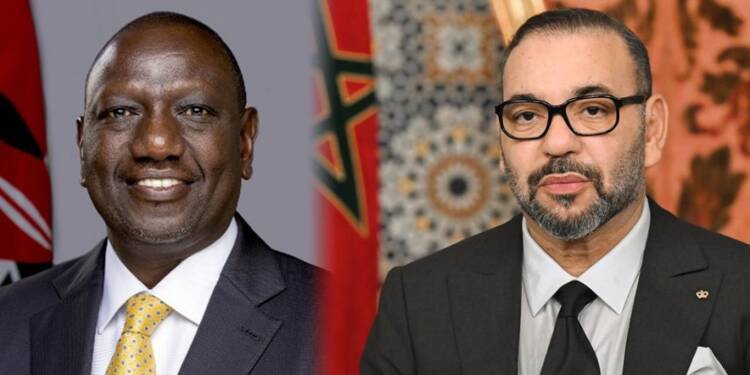 In a first change in foreign policy for President William Ruto since taking office, Kenya just withdrew its recognition of the breakaway area south of Morocco known as the Sahrawi Arab Democratic Republic (SADR). This radical measure may give Western nations sleepless nights.

Located on the northwest coast of Africa and bordering Morocco, Algeria and Mauritania, Western Sahara – with just 500,000 people – has been the subject of a 47-year territorial dispute between the Polisario Front and Morocco.
From Algeria, the exiled Polisario Front declared the independence of the Sahrawi Arab Democratic Republic within the 252,000 square kilometers of Western Saharan territory in 1976. Their ensuing war with Morocco was interrupted in 1991, when Rabat agreed to a cease-fire brokered by the United Nations. Tensions, however, have remained as the parties never agreed on a political solution.

Algeria has always defended the independence of Western Sahara and provides the Polisario Front with funding, an operational base and diplomatic support. It opposes what it considers to be Morocco’s annexation. The land border between Morocco and Algeria has been closed since 1994.

Algeria, Mauritania, and Morocco are not the only rivals in the region involved in the fight. Other regional and global powers are paying careful attention to the conflict.

In exchange for a peace agreement between Morocco and Israel, the US under the Trump administration recognized Moroccan sovereignty over the Western Sahara. However, since taking office, Biden has made unofficial attempts to change Trump’s course of action. He encouraged Algeria and its militias in the disputed area by sending out subdued signals. In essence, Biden’s strategy is to marginalize and exclude Morocco while elevating Algeria. However, in recent years, a growing number of countries have begun to endorse Morocco’s claim to the area. In accordance with the normalization deal between the two nations signed during the Trump administration, Israel has continued to deepen its ties with Morocco. In a rare display of unanimity, all of the Gulf governments voiced their solidarity with and support for Morocco’s stance. Recently, Spain endorsed Morocco’s plan for governing Western Sahara. The new entrant to this list is the East African country Kenya.

In a since-deleted tweet, President William Ruto declared that Kenya had revoked its recognition of the SADR and had started taking efforts to reduce the organization’s existence there. All authorized ambassadors will be given notice to depart the country until further notice because normal diplomatic relations between Kenya and Western Sahara have been severed. In essence, the diplomatic mission will be terminated.
For close to 35 years, Nairobi has supported the Sahrawi Republic in its quest for self-determination and independence.

So what brought this change of heart? Well, Morocco is an important economic partner for Kenya. Morocco is seen as a key source of the much-needed fertilizer for Kenyan farmers. The President had earlier even announced cheaper fertilizer would be arriving on the shores before the end of September.

Read More:  West-based mining companies have been ravaging Africa and Africans. Not anymore!

Due to its proximity to the Strait of Gibraltar, the Sahrawi Arab Democratic Republic is an area that the West views as being of great strategic importance. The region is seen as a bridge between Africa and Europe, connecting the shores of both the regions through the Strait of Gibraltar, thereby expanding and developing trade relations more effectively. As a result, Western nations could have easier access to the African markets.

Furthermore, the importance of Strait of Gibraltar cannot be undermined. At its narrowest point, it connects the Atlantic Ocean and the Mediterranean Sea as well as the continents of Europe and Africa, which are separated by 14.4 kilometers. Due to its geographical location, it is now regarded as a key intercontinental enclave, a necessary route when travelling from north to south to access the coasts, and an essential route for maritime trade when travelling from east to west. Therefore, having a puppet leader installed in a region like SADR, which is adjacent to the strait, could have given the Western countries the upper hand. The region also has vast natural resource wealth, including phosphate and shale gas. Since phosphates are a key, and finite, ingredient for synthetic fertilizer, they are a core resource in global food production. The region is also believed to have significant offshore oil and gas reserves, which could come in  handy for gas-starved western nations.
This is precisely why Biden was also seen promoting Algerian natural gas as a substitute after the Russia-Ukraine war broke out. The idea was to project Algeria as a partner of the Western world, thereby distancing the West from Morocco’s claims over Western Sahara.
However, with major European countries like Spain normalizing ties with Morocco, nations like Germany and their masters in America may have their heads started rolling. And now with Kenya, an important member of the US-controlled African Union, allying with Morocco, the situation would only further deteriorate for the West.

Collection of 43 Song of Achilles quotes and captions