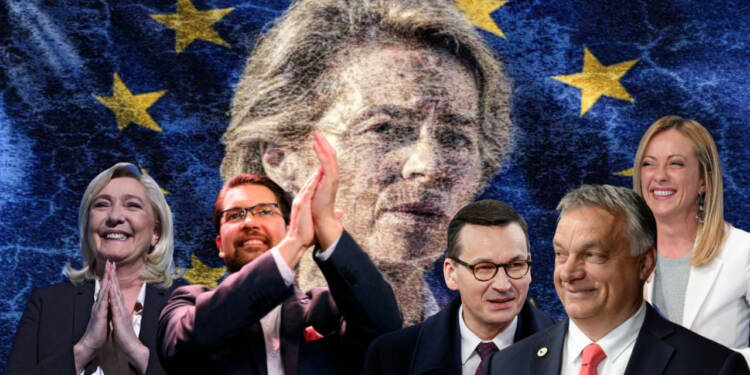 EU’s constant policing and arm-twisting of its member states have made it clear to the world that the EU’s so-called unity is a farce. History shows that the Union constantly tries to heckle those member states which tow different ideological lines.

One of the most recent examples to prove the above statement is Hungary. A little while back, EU Parliament declared Hungary is no longer a ‘democracy’. A similar attempt was made in 2018. At that time, Hungary was all alone fighting against Brussels. But now, the arithmetics have changed.

Giorgia Meloni, the right-wing leader in Italy, has blasted a resolution passed by the European Parliament that determined Hungary is no longer a democracy. She has extended her support for Orbán citing him as a democratic leader because he won the recent elections in Hungary. She called the proclamation by the EU ridiculous.

This is for the first time ever that Hungary has got such resoundings support from a prominent European nation. Behind this move, we can say is the current wave of conservatism flowing in Europe. This wave has encouraged Euroskeptic leaders to launch a long-anticipated front.

Consequently, the savior of ‘democratic’ Europe i.e. EU is infuriated and has heckled many conservative European politicians. These leaders have now vowed to demolish the EU in order to restore lasting peace. For this, a new bloc needs to be created. Here we have a few names, that would definitely stand in favor of such a move.

Giorgia Meloni is one of the most signifant Euroskeptic leaders in recent times. Her party, Fratelli d’Italia (Brothers of Italy) is set to capture around 25 percent of the vote share, whereas, her coalition may cross 50% of the vote share in upcoming elections.

This would be for the first time since 2008, that Italy’s RW is in such a strong position. Giorgia Meloni’s rise to power has made Brussels chill to the bones.

She has been a constant opposer of Brussels’ approach towards conservative leaders. In one of her recent speeches, she warned the EU that once she storms into Chigi palace, “Fun time is over for Brussels”.

Meloni has previously referred to the euro as the “wrong currency” and even gushed about her admiration for Viktor Orban of Hungary and Marine Le Pen of France.

So, you can play a safe bet that Meloni is not a Pro-EU leader at all.

Read More: Italy’s blow leads EU to collapse like a house of cards

Viktor Orban is a knight in shining armor for all those in Europe who keep different opinions when it comes to agreements with the EU. For years, Viktor Orban has remained in the cross hairs of Brussels and Orban has legitimate no problem with it. He takes it as a joke.

In his early political career, Orbán was a pro-western politician. However, he is no longer as devoted to the Western world as he once was. He is anti-communist, but not anti-Russian.

Furthermore, his conservative stance on a number of topics has prompted the EU to take harsh measures. For instance, Orbán’s obsession with George Soros’ activities in Hungary, made him pass the “Stop Soros” law, which would make it an offense to help people apply for asylum. This law has left the EU in annoyance.

Also, the controversial LGBTQ law that Hungary introduced in 2021 not only gained unequivocal condemnation from the EU but also prompted the EU to take legal action against the law. He also has a clear intention that Hungary would leave the EU once the time is ripe.

Sweden is a novice when it comes to Euroskepticism. For years, it has remained an ethnically mixed nation and a famous spot for migration, but not anymore. In recent times, conservatives have won Sweden, and Jimmie Akesson, who has been running an anti-EU Sweden Democrats, is now being labelled as the next PM of Sweden.

The party aims for zero asylum-seekers, along with longer prison sentences and wider use of deportation. Furthermore, the SD leader once made headlines for calling out ‘Swexit’. The matter was a hot potato between Sweden and the EU until the Sweden Democrats reversed their policy.

Interestingly, the SD aspires to transform the EU from the inside.

Poland was once love-sick for European Union, until their recent tensions. When it comes to Euroskepticism, Mateusz Moraweicki and Andrezj Duda are some famous white collars of the concept.

The nation started to chastise the EU on a variety of issues. For instance, Poland started to question promises of big guns like Germany, which had vowed to provide new tanks and weapons to Warsaw in exchange for old soviet era weapons given to Ukraine.

Later on, the EU started to twist the arms of Poland by creating thorns in the disbursement of the Pandemic recovery fund and other allocated funds for Ukrainian refugees.

Poland is eyeing to solidify the rising discontent within European Union and point cannons toward Brussels. It looks to actively collaborate with Hungary in its quest against the EU.

France: A new hope for conservatism

It’s not an exaggeration to say, the rise of conservatism throughout Europe is bolstering optimism across the continent. France is also one of the countries, where conservatism is making a comeback.

In recent Presidential and Parliamentarian elections, Marine Le-pen has gained grounds and Macron’s position has weakened. Now, the Right Wing Euroskeptic party is eyeing to open a front against the EU, once the Italian elections are over.

Once Giorgia Meloni is elected, Le-pen’s national rally promises to have strong ties with Italy.

Europeans are becoming more conservative than ever, which makes sense considering how fed up they are with recent events like the migrant crisis, the gas shortage, and the rising cost of living.

The empowered conservatives are now ready to seize control of the European Union. ‘Leave us alone or we’ll leave you alone’ is their straightforward clarion call.