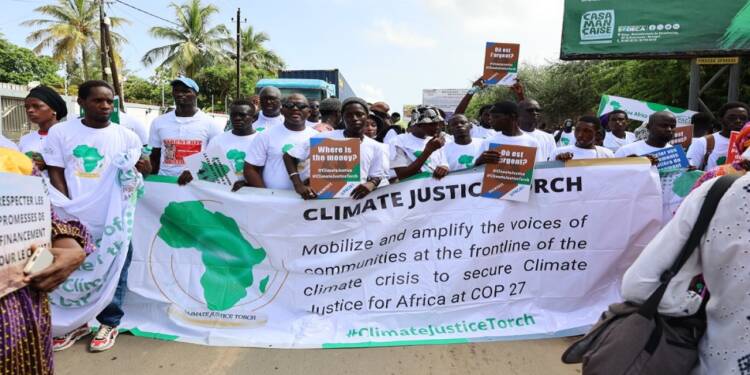 Hundreds protested in Kenya’s capital against the West for not doing enough to address the climate change crisis. The country is facing severe drought which demonstrators say is due to global warming. The protestors said that rich countries need to compensate for the pollution they have caused over the years. The protest march was part of Pan African Climate Justice Alliance, a youth-movement which holds demonstrations and rallies calling on rich nations to pay compensation for global warming.

The west believes itself to be an expert on climate change which has a right to dictate Africa on what it should and should not do. It never shies away from spending money on organizing meetings and summits where poor and developing nations are persuaded that mineral resources are harmful, that their infrastructure projects need to be curbed and developmental plans need to be suspended. The West has always dominated discourse on the environment at global level, the EU and the US have always used their powers to misguide poor nations in the name of climate activism and unfortunately many countries have fallen victims to the questionable agenda of the US and the EU.

The West has always occupied the role of a leader in the global climate movement which has given it an advantage over Africa . It has abused this position to go against those nations which dare to question the motive of the superpowers and start seeing their ulterior motives. The constant virtue signaling of the West by use of terms such as “climate emergency” is intended to create an atmosphere of panic among African and Asian states.

The US and the EU, which have a big role in causing global warming, never take responsibility for their actions. Despite having world-class economies, abundant wealth, advanced infrastructure and high literacy, the West failed to meet the global environmental goals. The highest levels of greenhouse gases’ emissions and pollution are caused by the West yet Africa and Asia are expected to compromise their aspirations to grow and develop, to address the climate crisis. Africa and Asia were not behind the record-breaking degradation of ecology and still they have to pay the price.

Empty promises of the West

Several African states have fallen victims to the false promises of the West. The EU and the US managed to deceive poor nations of Africa in the name of climate change and forced them into adopting methods which have put hurdles in their own growth and development. The real purpose of the West is not to protect the environment but to control the world order in such a way so that it works in its favour and puts the developing countries in a subservient position. Time and again, the West comes up with irrational ideas which in its view are going to help in transitioning into a green economy. Recently, John Kerry issued a statement, asking African countries to not rely on their own oil and gas projects as they will have an adverse effect on the climate. This shows the degree of selfishness that the West can put to display. Development and self-reliance in Africa is just not on the West’s agenda.

The US and the EU told Africa that it needed to pursue a green future which meant making changes in its developmental plans, reducing their use of mineral resources, getting rid of certain raw materials, suspending ongoing projects etc. The West promised African states investments, partnership, resources, military support, financial relief, concessions, benefits etc in exchange for adopting the US and EU demands on climate change. The idea of transitioning into an eco-friendly economy, championed by the UN, is a model which only rich nations have the luxury to afford.

African nations are loyal; they did what they were told by the West. They took steps which had negative repercussions on their economic growth, impacted agriculture and reduced their use of mineral resources, all in the name of tackling climate change, pursuing a green future and curbing global warming. But when it was west’s turn to do its part, it refused to fulfil its promises. The US and the EU abandoned Africa; in fact at the Africa Adaptation Summit in Rotterdam, European leaders’ conspicuous absence spoke volumes about their commitment on climate change. Leaders from Senegal and DRC criticized the lack of seriousness by the West in the meeting. Similarly, in the Paris agreement African negotiators were told that wealthy countries will increase climate financing by 100$ billion if Africa cut its carbon dioxide emissions but so far none of the assurances were fulfilled.

Now, under the garb of Ukraine war and energy crisis looming over EU, funds to Africa, to combat climate change have been stopped. The absence of European countries from Rotterdam shows the world that the west is not to be trusted. The west was never interested in combating climate change; rather it has been simply using it as a tool to stop developing countries to realize their potential and tread on the path to economic independence and development.

Read more: Kenyan President exposes the hypocrisy of the West at the UNGA