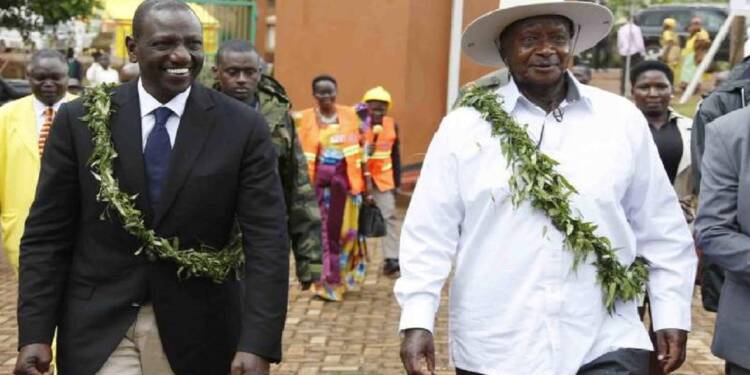 Uganda Kenya Relations:  Muhoozi Kainerugaba made some provocative tweets about invading Kenya. He wrote, “It wouldn’t take us, my army and me, 2 weeks to capture Nairobi. Union is a MUST! No honourable men can allow these artificial, colonial borders anymore.  If we our generation has men then these borders must fall!”

The foreign ministry of Uganda issued a statement which read it pledged its “peaceful co-existence” with neighbouring Kenya. After which Kainerugaba retweeted some congratulatory messages, which stated he should run for president in the next elections. Writing,”We are going to have a celebration down Kampala Road for this rank. I thank my father for this great honor!”

Biden and his allies turned to Africa for help

In the wake of Russia’s military operation in Ukraine, the West is struggling to get Asian and African states on its side. The US, EU and NATO imposed sanctions on Russia which were meant to damage the economy of Russia, destroy Putin and threaten the Kremlin into suspending its military action in Ukraine. However, the sanctions culminated into a nightmare for the West which is witnessing severe oil and gas shortages, record inflation and financial instability.

In such circumstances, the West is desperate to get its hands on oil, gas, gold, uranium etc. That is why it turned to African countries which are rich in mineral resources for help.

However, unlike the US and EU, leaders in Africa are intelligent and far-sighted as they know that backing the West will destroy their economies and they will suffer political instabilities. Therefore, nations like Democratic Republic of the Congo, Kenya, Mali, Central African Republic, Guinea are backing Putin.

Now, Uganda is against the West. Its leader Yoweri Museveni condemned the European Union for passing a resolution against a historic pipeline project between Uganda and Tanzania called the East African Pipeline Project. Museveni realising the necessity of unity and self-sufficiency in African nations, defended his oil pipeline project. In reality, the EU is not concerned about the project’s impact on the environment, it is worried because the oil pipeline will curb Africa’s reliance on it for oil imports. Museveni affirmed that Uganda is going ahead with the project.

Uganda abstained from voting during the UN resolution which condemned Russia’s military action in Ukraine. Museveni met Russia’s foreign minister in July and defended the Kremlin in the wake of widespread attacks on Putin.

Similarly, Kenya too is moving away from the dominance of the West and taking its own decisions. Last month, Kenyan president Dr William Ruto announced that he will deploy Kenyan Defence Forces (KDF) in east Democratic Republic of the Congo to fight against the M23. M23 is a terrorist group which operates in east DRC, is backed by Rwanda which in turn is supported by the West. Desperate to gain control over DRC’s gold and cobalt, the US and EU in collusion with Rwanda are financing M23 which is involved in smuggling and killings of those civilians whom it suspects of being military informants.

Also Read: Kenya dispatches its troops to end the Rwanda-Congo conflict once and for all

The Western mainstream media criticised Dr Ruto for this decision, saying that he has no right to interfere in the internal matters of another country. However Ruto, realising that peaceful democracy and prosperity can only be achieved when M23’s presence is eliminated from the East African region, decided to go-ahead with his plan irking Biden and his allies.

In light of these disputed tweets, and the rumours of a probable West backed coup to topple Museveni, Ruto visited Uganda and met Museveni. The Kenyan president attended the nation’s 60th independence day celebrations. Both leaders emphasised their partnership. Ruto also met Ethiopia’s Prime Minister Abiy Ahmed who is embroiled in a civil war with the Tigray People’s Liberation Front, another terror group backed by the West which is trying to destabilise Ethiopia. Ruto realizing the importance of bringing together the EAC has seen through the evil intentions of the west, and is certainly not going to let them ruin the era of development that is dawning upon the continent.

West is behind Kainerugaba’s tweets

Muhoozi Kainerugaba’s tweets seem to have been made on the instructions of the West. Otherwise why would a military commander like Kainerugaba make such remarks knowing fully well that it will have drastic consequences on the political future of Uganda and he will lose his military post? Why would Kainerugaba talk about invading Kenya when he knows that it will affect its relations with Uganda? There surely lies a vested interest behind these outrageous tweets.

When Biden, Macron, Scholz and Leyen failed in their attempts to prevent Uganda from moving ahead with its pipeline project, stop Ruto from deploying Kenyan troops in DRC and topple the Ethiopian government through TPLF, it decided to create conflict, crisis and instability in some other way. And that way is getting Kainerugaba to tweet about invading Kenya, the West is using its colonial practice of divide and rule to create trouble in Africa. The US and EU are trying to turn Uganda and Kenya, which have good ties, against each other.

Political stalwarts suspect that these could be the nascent signs of a probable military coup, which the west would perpetrate by using Kainerugaba to overthrow his father Museveni’s government and install him as the ‘puppet’ leader of Uganda. If there is a military takeover in Uganda and Kainerugaba becomes the president, then Uganda will immediately shut down its East African Pipeline Project, cut all ties with Kenya, finance Tigray People’s Liberation Front and back M23 rebels in east DRC.

The far sightedness of Ruto and Museveni, have for the time being nipped the clandestine intentions of the west in the bud itself. However, the continent of Africa needs to be far more cautious and keep their homes safe because parasites such as the west can enter from anywhere if given a chance.