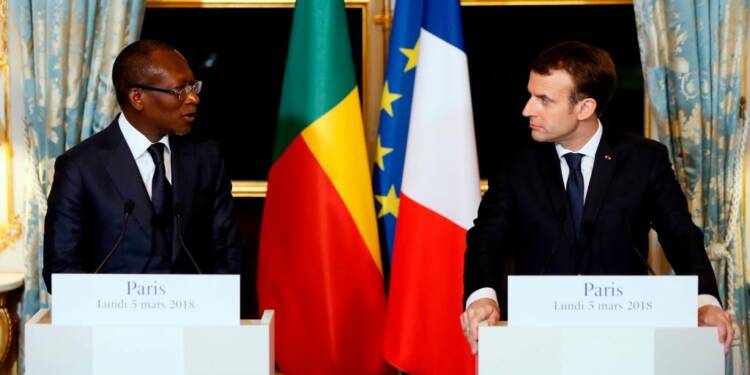 Barkhane 2.0 Module: France first came to West Africa more than eight years ago, promising to bring peace in the region. But as Mali and Burkina Faso found out about its wicked plan, they decided to drive it out of their lands.

Today, Paris is back in the region and its latest victim is Benin. Macron, who recently announced that he will end Mission Barkhane, is plotting something big in Africa.

The French government gave Benin military vehicles to assist in the battle against Islamist insurgents. The vehicles were presented by French diplomat March Vizy to Benin’s army Chief of Staff.

France stated that it will take part in the fight to end terrorism in the region and will back its allies which are dealing with various Jihadist and insurgent organisations. It also added that it will work to ensure the peace and security of West Africa.

In the northern region of Benin, terrorists from neighbouring Burkina Faso have crossed the borders and are attacking military and civilians.

Now, Burkina Faso is a crucial part of the Sahel region. Sahel is troubled by various Islamist and rebel groups; this led to France deploying its military across the region in 2013 under an operation called Mission Barkhane. The plan was to eradicate terrorism and insurgency from the region

France also founded a military alliance whose members included Mali, Niger, Burkina Faso, Chad and Mauritania. However, the mission of the West turned out to be a big failure since the terror and rebel groups got more emboldened instead of getting eradicated which was the main purpose of France’s intervention.

The hidden reason behind France’s meddling in Sahel was to further escalate its security crisis so that it can capture its mineral resources. Its soldiers were even caught conspiring with Jihadists.

Had France been sincere in its objectives in West Africa, it would have resolved the menace of terrorism by now and would not have been supplying military equipment to Benin to the fight against extremists. Macron’s regime supplying Benin with military equipment is Operation Barkhane 2.0 which is its strategy to stay in the adjoining areas of the Sahel region.

Earlier, France sent its forces to the Sahel but this time it is sending army equipment and has chosen Benin as its first target.

Recently, Italy’s new prime minister, Giorgia Meloni, criticised France as it threatened her with “serious consequences” after a boat carrying 234 migrants from Africa was not permitted to enter Italian ports. She defended her decision by stressing that EU’s borders must be protected from Islamist extremists from Africa and the Middle East.

Meloni stated the reason that why people from Africa are coming illegally to Europe is because France and its allies are creating instability for earning profits through exploitation.

But France continues to defend its position on illegal migration and ironically accuses leaders like Meloni of human rights violations.

In the backdrop of France’s atrocious actions, Benin can form regional military alliances with neighbouring states.

It can follow the examples of Ethiopia-Eritrea and Kenya-DRC-Uganda. The former created a military alliance which successfully destroyed the Tigray People’s Liberation Front (TPLF), while the latter is involved in an ongoing campaign against the M23 in eastern DRC.

Now, Benin’s neighbouring country is Niger with whom it is building a major oil pipeline. The project is said to benefit both nations in the long run. However, the eastern region of Agadem, where the pipeline is being built, has many Islamist groups. Considering this, Benin can form a military alliance with Niger to get rid of the terror issue in both countries.

It can also create an alliance with Burkina Faso, which is taking help from Russia’s Wagner Group and is also suffering with the same security issue.

Hence, rather than depending on France to resolve the danger of terrorism in its territory, Benin can rely on its neighbours. It is clear that the real intention behind Macron’s assistance to Benin is to activate Barkhane 2.0. The West is manipulating Benin into believing that it is an ally. However, in the light of France’s atrocities in the Sahel, Benin must not venture on this route. Otherwise, Benin will be facing an unending civil war.