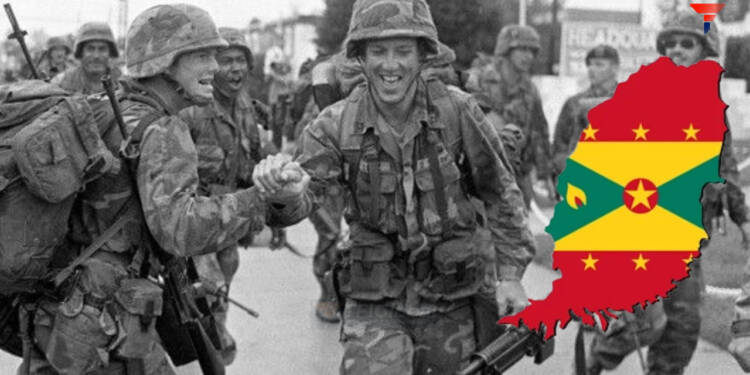 How would you react if someone trespassed on your property? Will you become furious and demand that they go immediately? This exact scene took place between the United States and Great Britain. The Commonwealth countries were prepared to fight over an US invasion of the Caribbean while Grenada was stuck in a political impasse.

The year was 1979, and the allegedly communist New Jewel Movement seized power in a coup under Maurice Bishop, suspending the constitution and detaining several political prisoners. In September 1983, an internal power struggle began over Bishop’s leadership performance.

Maurice was pressured at a party meeting to share power with Deputy Prime Minister Bernard Coard. He initially agreed, but later denied to do so. He was put under house arrest by his own party’s Central Committee until he relented. To make matters worse, the US jumped into the scenario with its invasion.

The Reagan administration in the U.S. launched a military intervention following the receipt of a formal appeal for help from the Organisation of Eastern Caribbean States. In addition, the Governor-General of Grenada Paul Scoon secretly signaled he would also support outside intervention, but he put off signing a letter of the invitation until 26 October.

At that time, the Reagan administration stressed that due to “concerns over the 600 U.S. medical students on the island” and fears of a repeat of the Iran hostage crisis, the invasion of Grenada was a necessity.

A massive tussle between Grenadian armed forces which backed the communist regime along with the US army. Fighting continued for several days and the total number of American troops reached some 7,000 along with 300 troops from the OECS. The invading forces encountered about 1,500 Grenadian soldiers and about 600 Cubans, most of whom were combat engineers.

The troops put up a fierce fight, according to official U.S. sources, and were so well-positioned and well-prepared that the U.S. had to send in two battalions of reinforcements that evening on October 26. However, the invading forces’ complete maritime and aerial supremacy, which included helicopter gunships and naval artillery support, turned out to be a huge advantage.

In the invasion, 19 U.S. troops were killed and 116 were hurt. Grenada lost 45 personnel, including at least 24 members of the armed forces and suffered 358 injuries. Cuba suffered 25 combat fatalities, 59 injuries, and 638 prisoner captures.

In mid-December, after a new government was appointed by the Governor-General, the U.S. forces withdrew. However, the problems for the US had just started as its NATO allies were not at all impressed by what the US invasion did to Grenada.

Read More: Caribbean nations are hitting the panic button amid a massive ‘brain drain’ in the health sector

Though the US attempted to persuade Thatcher that the invasion was not planned, Thatcher didn’t buy any of the excuses.

“This action will be seen as intervention by a Western country in the internal affairs of a small independent nation, however unattractive its regime. I ask you to consider this in the context of our wider East-West relations and of the fact that we will be having in the next few days to present to our Parliament and people the siting of Cruise missiles in this country…I cannot conceal that I am deeply disturbed by your latest communication.”

The Trudeau administration emphasized the fact that the invasion endangered the lives of around 40 Canadians who were present on the Caribbean island. Mr. Trudeau was not informed of the invasion beforehand, hence, he was also unsatisfied with Washington’s justifications.

Read More: Grenada: The land of thousands of spices and millions of lost opportunities

Invasion of the commonwealth!

The United States has certainly invaded other countries before, so this is not a new occurrence. Ask the people of Vietnam, Iraq, and Africa how invasions feel. But at that time, none of the Western powers pointed a finger at the United States. ‘

Then why did the UK and Canada find the invasion of Grenada to be such a bummer? Well, Grenada’s invasion was not just an invasion of a country, it was an attack on the commonwealth.

For those who don’t know, Grenada did become independent from the UK in 1974. But in 1979, it acceded to the Commonwealth. On February 7th, 1974, Grenada officially became an independent nation, with Eric Gairy serving as its first prime minister. With Queen Elizabeth II as its first head of state and King Charles III serving as its current monarch, Grenada joined the Commonwealth of Nations.

As a result, any attack on Grenada was considered a flagrant attack on the commonwealth, Great Britain.