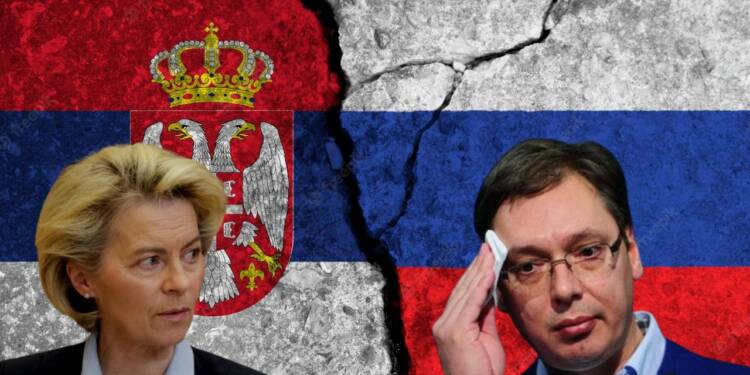 In the backdrop of the conflict between Serbia and Kosovo, the European Union has started blackmailing the former. It is worried that its sanctions against Russia didn’t have any major consequences. Hence, Brussels is now deploying another tactic to damage the interests of Russia and its ally, Serbia.

A bombshell from Vucic on 23rd January confirms that the West’s strategy will inevitably fail.

Now, recently tensions between Kosovo and Serbia have escalated. The Kosovo government ordered people residing in Serb-dominated areas, to swap their Serbian-issued car number plates for Kosovan-issued ones. Around 50,000 people disobeyed the state’s command and protested. This prompted the Kosovo’s government to crush the protest by violent means.

Read more: Serbia refuses to bow down before the West

In such circumstances, Kosovo’s president, Vjosa Osmani, alleged that Russia is supporting the ethnic Serbs. It is natural him for fire these accusations. In the conflict between Serbia and Kosovo, the former has always received backing from Russia whereas the latter is supported by the US and Europe

But shockingly, the Serbian president, Aleksandar Vucic has lately taken an anti-Russia stance. During an interview in Belgrade, he rejected the claims of Vladimir Putin regarding territorial gains made by Russian forces in Ukraine. He added that he had not talked to Putin for “many months”. Vucic also criticised the Russian mercenary Wagner Group for trying to recruit troops from Serbia following a local adverstiment for Serbs to join the war against Kyiv.

The reason why Vucic’s claims are unusual is because Serbia has always exhibited a pro-Russian stance in its foreign policy. In fact, this is the main cause for the West’s persistent attempts to diplomatically damage the Balkan nation.

The West has used many pressure tactics to fulfill its agenda. Germany’s foreign minister, Annalena Baerbock, called Serbia’s decision to deploy its forces in Kosovo as “totally unacceptable.” Whereas, the NATO threatened Serbia by announcing its intention to enhance its peacekeeping forces in the Balkan region. The US and Europe have always hounded Belgrade in the geopolitical arena.

The reason for anti-Putin stance

Another statement made by Vucic on 23rd January articulately illustrates why he is taking an anti-Russia stand.

During a speech, Vucic stated that the EU has made it clear that its nations will cease their investments in Serbia and would not integrate Belgarde in the bloc if he didn’t accept the “Franco-German” plan regarding relations with Kosovo.

“If the choice is to have isolation and sanctions like this or that, and there are no worse sanctions than the withdrawal of investments, which I have been told three times, or shall we say we accept everything and immediately and Kosovo in the United Nations, I am in favour of a path of compromise, as much as possible to fight.”

Vucic’s remarks thus, make complete sense. The reason Serbia adopted a position which is hostile to Russia is because it is being blackmailed by Ursula von Der Leyen. Vucic is fearful that like other small sovereign nations, Serbia too, will become a victim of the West’s wrath. He realizes the damage that can happen to economic and political interests of Serbia if he disobeyed Brussels’ command. However, fortunately, Serbia can count on its tradition ally, Moscow, which will not abandon it, in the face of Biden and Leyen’s atrocities on its territorial integrity and political stability.

Read more: “Kosovo is our problem,” Serbia asks Germany to mind its own business