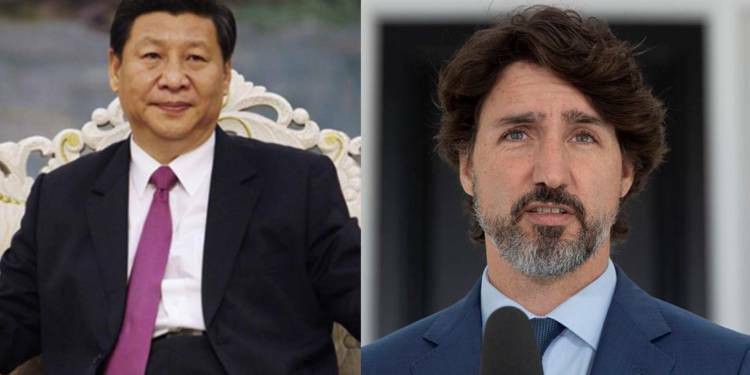 If there’s an identification acquired by China’s People’s Republic and its disgraceful Communist dictatorship, it is nothing more than its despicable “spying and snooping” operations on foreign nations. A major Chinese government investment fund is one of the main sponsors of a business that Canada uses to obtain and process visa applicants’ details worldwide and we all know what it means.

After Huawei’s plan of creating a surveillance state by creating an intricate espionage net was thwarted, the CCP quickly recalibrated its plans and unleashed malicious malware on foreign companies in mainland China to snoop on them, the US cybersecurity caught on but now the spying is being protected by layers of corporate hoopla as CCP funded firms take up roles of silent investors in organizations used by governments for identification and documentation.

Read More: Such is the fear of Trump that over 1000 Chinese spy-researchers have left the US for China

A major Chinese government investment fund is one of the main sponsors of a business that the Canadian government uses to obtain and process visa applicants’ details worldwide. Some former foreign intelligence leaders in Canada have been warned by the ownership system that Ottawa should carefully think that a corporation, which is partially CCP-owned should not be allowed to obtain confidential information.

Chengdong’s Chinese State-run giant with assets above US$1 trillion is a subsidiary of China Investment Corp Chengdong Investment Corp. is one of the most relevant partners in the business partnership of TT Services that operates visa application centres for the Government of Canada in 24 countries and is presented at the British register, Companies House, which provides fingerprint collection, portraits, biography, and other personal information.

Chinese national law also demands cooperation with intelligence services for any national organization operating within the country. In 2008, when the company started to manage visas in China, where the police have access to corporate offices, immigration advisors in Canada raised questions about the VFS deal.

An enormous personal data is treated by VFS, according to Richard Kurland, a Vancouver immigration lawyer. He stated: “Passing through their hands are the family trees of applicants,” Mr Kurland said. “The VFS organization may have more personal information on applicants for immigrant services than entire countries do.”

Founded in 2001, by an Indian entrepreneur Zubin Karkaria, VFS is now majorly held by EQT VII, which has several partners. Two of the largest partners are Eight Finance Investment Co. Ltd., which belongs to the Hong Kong sovereign wealth fund, and Chengdong Investment Corp.

Bobby Reddy, a lecturer at the University of Cambridge Faculty of Law argued that there are privacy safeguards in the agreement between VFS and the Canadian government. He said, “VFS and the Canadian government say their agreement includes privacy safeguards. And under British law, limited partners such as Chengdong are meant to be “passive or silent investors.”

Read More: China has been caught spying on Prime Ministers, Presidents, Premiers and Justices of US, India, Australia and many others

But Richard Fadden, who worked as National Security Adviser to two prime ministers, and formerly as the director of the Canadian Security Intelligent Service, said that he did not consider the management of visa applications from a business operated by a China-based State-owned enterprise suitable for the government.

He reported that Minister of Foreign Affairs François-Philippe Champagne has recently ordered a review of an arrangement in which a Chinese government-owned firm will supply Canadian embassies with new X-ray protection equipment.

Mr Fadden further said, “It seems to me that if there are concerns in Ottawa about a company that is owned by the Chinese company operating X-ray machines in Canadian embassies, then there should be an equal amount of concern about the possibility that a Chinese company might have access to all sorts of information about foreigners wanting to come to Canada.”

State-owned enterprises are a central pillar of China’s foreign policy and the country has tried to strengthen its financial institutions’ external scope.

In recent years, the Chinese government has reaffirmed greater influence over enterprises within its boundaries, both governmental and private. In September, the Communist Party urged private businesses to recruit “politically sensitive people” who would “listen to the party firmly and follow the party.”

In the current environment, when reports of Chinese espionage on foreign governments and firms are on a rise it would be unwise to ignore the potential risks of letting a CCP-funded organization having access to visa information of citizens immigrating to and from Canada.

With rising threats of Chinese intrusion in the government of foreign states and foreign media, the Canadian government sought to address the challenges of being linked to a CCP owned firm, which is in charge of documentation and identification of citizens all around the globe. With the United States and Australia already bludgeoning down on such entities, it is a path the Trudeau administration ought to follow.