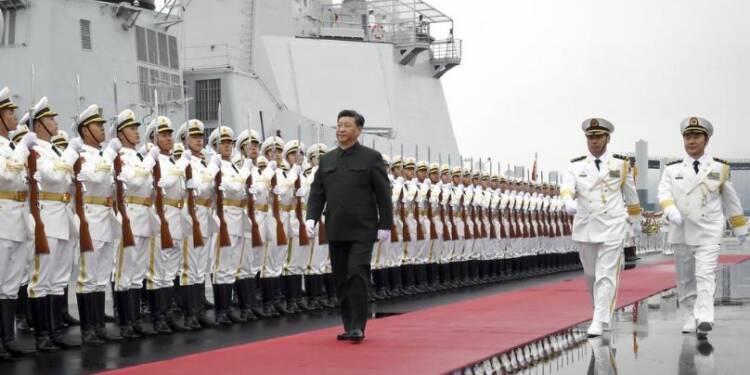 China and its authoritarian leader Xi Jinping is desperate to bring about tremendous changes in Chinese armed forces operation. According to a South China Morning Post report, Beijing has accelerated the pace of building aircraft carriers to emerge as the second biggest player in the international waters after the USA. China aims to build at least four aircraft carrier strike groups by 2030 but a strange yet predictable predicament is now facing Jinping right in the face — something which could render his armada of warships inoperable.

The middle kingdom might be able to build the massive machinery that will float in the international waters but any machine is only as good as the humans operating it.

The analysts have cast a shadow over the fact that China will not be able to train the personnel required to man the warships. The publication quoting military sources said that the PLA navy’s training was still lagging and crews would not be adequately trained by the time the warships were launched.

Indian Air Force Pilot Wing Commander Abhinandan Varthaman had shot down a much advanced Pakistani F-16 fighter jet with his decades-old MiG-21, thereby asserting the fact that it is not the machines but the valour and capability of the fighter soldiers operating those machines that help win the battles, and eventually, the wars.

The PLA sailors who hide from foreign navies by masquerading as fishermen in the high seas and only attack in a coward manner are expected to man these warships. The CCP Politburo does not even have the requisite manual to teach its navy personnel how to operate the warships.

Reported by TFI, Jinping in November last year had issued new training guidelines for China’s PLA. Hilariously, more than 70 percent of the document was based on US military guidelines for joint operations. Why? Because China wants to foster integration between the various combat forces and the PLA’s advanced weapon systems, however, that would require knowledge of modern warfare and advanced weapon system handling on the part of the top leadership. Such knowledge is nowhere to be found in China. Therefore, the ambitious dream of Jinping to create a flotilla of warships lingers in jeopardy.

Jinping, the Chairman of the Central Military Commission, recently signed an order to release revised regulations on military equipment, in an attempt to bring PLA on the same level with the enemies that are currently superior to it.

Read more: Back to back military setbacks in 2020, primarily by India, forces China to rejig its entire military infrastructure

The revised regulations have been released to improve PLA’s war preparedness and combat capabilities. The regulations define the basic tasks, contents, and management mechanisms for military equipment to work under the new situation and system.

However, the revised law clearly downgrade the State Council’s role in formulating the principles of China’s national defence, and the right to direct and administer the mobilisation of its armed forces.

Jinping is usurping the military power because he does not trust his unskilled lieutenants to hold the fort. By snatching the power from the civilian-led defence ministry, Jinping has haphazardly indicated his helplessness.

While Jinping is desperate to roll out instantaneous changes in his military establishments, his huffing and puffing forces, on the other hand, are having a hard time keeping up with the tachyon-like speed of the vicissitudes which most certainly are expected to expose the deep flaws in the operating procedure of the Chinese armed forces.