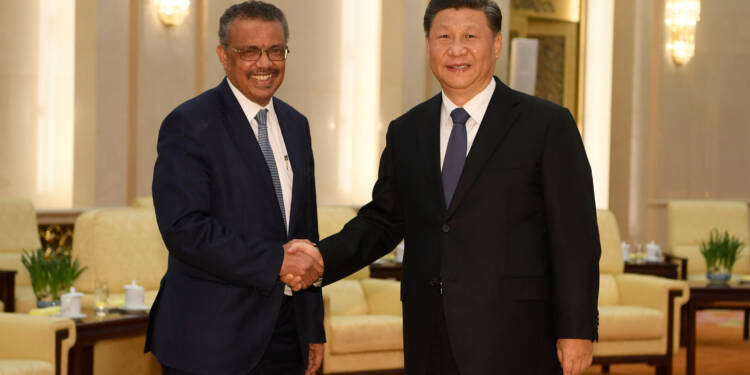 It seems that China and World Health Organisation have transformed their relationship from collaborators to now very close friends, and it does not look good. The relationship has grown so much so that the Chinese Communist Party mouthpiece Global Times has come to the rescue of WHO even before it gives a clean chit to  Xi Jinping and China.

The WHO’s so-called investigation team is probing the origins of COVID-19 virus in China and before the report comes out, which all of us already know will give a clean chit to Xi Jinping, Global Times has come out with the explanation as to how WHO is doing its best and how it has “not mishandled” the pandemic. It went to the extent of blaming the Western countries for being too used to the West-dominated international organisations, and that the western countries could not tolerate China’s growing strength. Inadvertently accepting that WHO has now been dominated by China.

After the CCP General Secretary Xi Jinping barred the entry of a World Health Organisation’s (WHO) investigative team to enter the country to probe the origins of SARS-COV-2 (Covid-19 causing virus strain), reports stated that yet another massive coverup has been done by China in Wuhan – ground zero of the global pandemic. The CCP had forced deletion of hundreds of pages of crucial studies by the National Natural Science Foundation of China at the Wuhan Institute of Virology. And then after cleaning all the proofs, the Communist regime gave its nod to allow the WHO-team to enter the country beginning.

Read more: China invites WHO to conduct its free and fair probe into the origins of the Coronavirus by removing every single trace of it.

The CCP mouthpiece went to the extent of saying that China’s rapid economic recovery and huge potential to recover has scared Western countries, which have seen their economies recede for almost a year, and this further escalated their slander against China. It also laid down the WHO’s timeline on its COVID-19 response, stating that WHO had tweeted that there was a cluster of pneumonia cases in Wuhan on January 4 and provided detailed information to its member states and advised them to take precautions to reduce the risk on January 5, 2020. The Global Times article also mentioned that the first disease outbreak news report was sent out to global media on the same day.

But the thing to focus here is that Global Times, which is supposed to carry the opinions and narratives of the Chinese Communist Party, but instead, it is carrying the reasons and narratives to back the unbiased nature of WHO, as it is today. It is a sight to behold, when the most biased news organisation, which is unabashedly a narrative machine of the Communist Party is giving WHO a certificate of unbiased nature and its effective utilization of all the tools at its disposal.

But, it is not something one must be surprised with, given the WHO and Communist China have been in cahoots with each other, which is the biggest reason for the world at large not believing in the World Health Organisation and considering it to be compromised in favour of China. While the Global Times would have wanted to prove how good WHO is, but the effort has become counterintuitive. Now, the world has all the more reasons to be cautious of whatever WHO says. And given in the coming days it will come out with the report of the investigation that is being conducted at Wuhan. And the international community should not be surprised when the WHO’s investigation team gives Xi Jinping a clean chit. You scratch my back, and I will scratch yours. This should be the new war-cry of Chinese WHO.