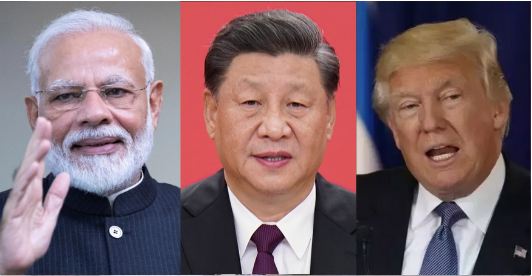 A latest Kabul Times report has revealed that Chinese lending under Xi Jinping’s flagship BRI has come down from USD 75 billion in 2016 to merely USD 3 billion in 2020. It is not a coincidence that it was also during this period that Modi and Trump led a major anti-China campaign. In fact, it is the Modi-Trump effect that has bamboozled Xi’s BRI.

The BRI has registered a major slump over the last one year. And the reasons are clear- China created a pandemic and started facing backlash from all other parts of the world. Also, the Chinese economy is too badly bruised to fund Xi’s ambitious infrastructure development programme.

Yet, the amount of BRI loans has been continuously going down over the past four-five years. Its demise isn’t solely attributable to the pandemic, though the pandemic did accelerate the process. So, what are the real reasons?

Actually, Belt and Road Initiative projects have failed for a number of reasons. But the debt problems attached to the initiative is the biggest reason. The BRI, when launched in 2013, was billed as a new-age Silk Road by China. Yet, a few years down the line, it became amply clear that the BRI wasn’t just about connectivity and this is where the trouble began.

In a 2017 analysis, an Indian geo-strategy expert Brahma Chellaney pointed out China’s ‘debt-trap diplomacy’. It became clear that Beijing would offer loans for unviable projects and secure access to resources or markets, after likely defaults by the recipient nations.

The thing is that China promised to give connectivity through BRI. But the BRI turned out to be an instrument of foreign policy coercion. Therefore, many recipients either rejected BRI loans or started reviewing the process.

Modi and Trump managed to successfully associate ‘debt-trap diplomacy’ with the BRI. In forums from Asia to Africa, the US issued warnings about the risks attached to the Chinese loans. India, on the other hand, was more subtle in its warnings but was equally effective.

New Delhi managed to convince others that the BRI is a form of neo-colonialism. Prime Minister Modi, for instance, said, “History has taught us that in the name of development partnerships, nations were forced into dependence partnerships. It gave rise to colonial and imperial rule. It gave rise to global power blocks. And, Humanity suffered.”

Proving how Chinese BRI loans can be debt traps isn’t much of a task. The world had already seen what happened with Hambantota. China funded a Sri Lankan port project and soon it was discovered that the project was unsound. The strategically-located Sri Lankan port actually fell into China’s hands under a long-term lease.

The Hambantota port fiasco, of course, preceded the BRI. But the essence of predatory Chinese lending wasn’t dissimilar. And then, the China Pakistan Economic Corridor (CPEC)– a part of the BRI, again proved that Beijing chips away with a piece of your sovereignty as consideration for its loans.

More importantly, Trump and Modi did manage to move above rhetoric. The former US President’s entire tenure was an awful, thrill minute ride for China. Trump managed to ruin the Chinese economy with a major tariffs war. This, of course, brought down China’s capacity to dole out big loans. More specifically, Trump slapped sanctions on CCCC, a leading BRI entity in China.

India, on the other hand, played a very constructive role in its periphery. For quite some time, India has been rendering cost-effective infrastructure services in its neighbourhood minus Pakistan.

In fact, the Modi government is promoting inter-boundary roads, port development and other infrastructure in countries like Afghanistan, the Maldives, Sri Lanka, Myanmar, Bhutan, Nepal and Bangladesh. With the passage of time, New Delhi has managed to bring along with the US. The message is clear- if you choose India over China, the US will come along with you.

Right at the end of his tenure, Trump too was thinking on lines of providing an infrastructure lending alternative to the BRI. In Africa, he was actually getting actively involved to damage the BRI in countries like Sudan, Tunisia and Morocco. And then, there were also reports of a US-Taiwan initiative rivalling Beijing’s BRI.

If you see the world getting saved from China’s ‘debt-trap diplomacy’ and the BRI biting the dust, you ought to thank Trump and Modi for making it possible.