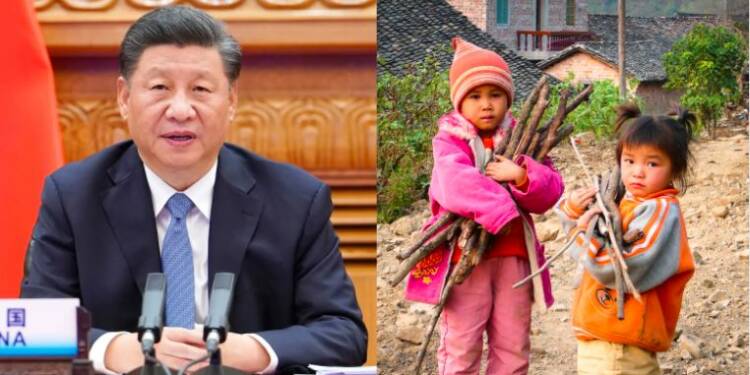 When Mao took over China some 72 years ago, he promised equality. So, the rich were either killed or looted. This was followed by 72 years of Communism and CCP rule. And guess what? China, under Xi Jinping, today has lesser equality than it did 72 years ago. The nation has the highest number of billionaires in the world, while many of China’s citizens are put up on less than ten dollars a day.

But the serious disparity in wealth is not the only issue in China. The country also faces another disparity, which shows up in the serious gap of development in urban and rural areas. President Xi Jinping has been running a propaganda campaign about how he has eradicated poverty in China, but his claims fall flat as even the Chinese media has exposed the miserable condition of rural China.

Earlier this year, Xi had himself claimed that the “arduous task of eradicating extreme poverty has been fulfilled”. He added that it was a “complete victory” that would “go down in history”.

However, Apple Daily, a Hong Kong-based newspaper, in its recent report, has cast a serious shadow over Xi’s claims. Apple Daily published a report titled, “Xi’s claim of victory over poverty in doubt after Shaanxi officials faked progress reports.”

As per the report, officials from remote villages in China’s Western Shaanxi province falsified progress reports on poverty relief works. As per the Chinese State media, the local officials did so in order to artificially meet national targets.

A Chinese State-run media house, China Central Television (CCTV) reported that subsidised homes for impoverished households in the hilly region of Luonan county remained incomplete. CCTV further reported that there is no water and people have to travel for up to two hours to get supplies from a storage facility.

Under its drive to eradicate poverty, the Xi Jinping administration has promised to provide housing, food, clothes, healthcare and burials for impoverished households.

But the Luonan episode shows just how superficial Xi’s poverty eradication campaign is. CCTV revealed that local officials in Luonan county moved some villagers into housing units when their superiors inspected the level of progress towards meeting the targets. It further reported that after that, there was no work on the completion of the housing units.

And when it came to water supply, the local officials simply turned a blind eye. Even the villagers who remained in their houses did not get any water supply. So, they had only two options left – dirty water from small ponds nearby or rainwater on rooftops.

Now, we need you to understand that Luonan county has been removed from a list of impoverished areas since February last year. So, Luonan, a county where people have no access to freshwater doesn’t count as ‘impoverished’ in Xi’s vocabulary.

In fact, last year, Xi Jinping’s China removed the last remaining counties from its list of poor regions. Given the amount of secrecy that China’s local officials and Central administration maintain, no one can fairly guess how many regions have eradicated poverty only as efficiently as Luonan.

In fact, TFI had earlier reported that there are villages in China, where residents have no proper access or roads, or where even kids are spotted eating rats for survival. Then, there is a small fun fact- the Xi Jinping administration says that all such towns and villages have been pulled out of poverty.

Xi’s poverty eradication propaganda got exposed in Luonan only because CCTV reporters had an altercation with the local officials after which the media house compiled a report. The entire episode, however, does reveal the reality of Xi’s poverty eradication campaign. Chinese villages continue to live miserable while Beijing claims that there is no poverty left in the Communist nation.