China can easily weaponize its “out of control rockets” to destroy a London, a New York, a Canberra, or a New Delhi 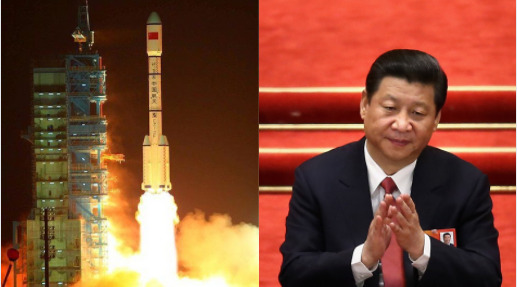 The value of human life is just as unbeknownst to China, as human rights are alien to Chinese citizens. Small Chinese ‘accidents’ can kill millions across the globe, or alternatively, wipe out some of the most popular cities. We are talking about China’s reckless space program, which simply launches rockets into space and then loses control upon them. These ‘out of control’ rockets then make risky re-entries crash and land anywhere on the earth.

Whether uncontrolled Chinese rockets hit the inhabited parts of the earth and destroy populous cities like London, New York, Canberra or New Delhi does not concern Beijing. Recently, one such Chinese rocket- March 5B went out of control. China was clueless and indifferent about where its ‘out of control’ rockets would crash. The debris of Long March 5B actually landed in the Indian Ocean and missed the Maldives by a whisker.

The range of accidents that an uncontrolled Chinese rockets can cause after re-entry is way too wide. As per Jonathan McDowell, a Harvard-based astrophysicist, the potential debris zone of Long March 5B was as far North as New York, Madrid or Beijing, and went as far South as Southern Chile and Wellington, New Zealand.

So, you never know as to what part of human civilisation might suddenly be struck by a failed Chinese rocket, causing unimaginable devastation.

NYT reported that China’s space program is the only one to have “lifted rocket stages this big to orbit and left them to fall somewhere at random.” And this is not exactly a rare phenomenon. China has a habit of crash landing monstrous rockets.

Last year, the maiden flight of Long March 5B fell on the Ivory Coast and damaged several buildings. Fortunately, no injuries were reported but it was a deep insight into what China’s irresponsible space program could do to the world.

In fact, if the 20-ton core stage of Long March 5B had passed through Earth’s atmosphere 15-20 minutes earlier during reentry, then the debris could have wreaked havoc by raining down on New York City. So, this is how close China came to triggering yet another humanitarian catastrophe.

For China, such uncontrolled rocket re-entries are a mere slip-up. An indifferent Beijing would want to think of them as minor accidents. But then, such minor accidents can kill entire cities. And if China is condemned, a State-run media publication would shrug it off as Western propaganda. The authoritarian and violent regime in Beijing would never confess that it is irresponsible, criminally callous and a threat to humanity.

Read More: China is trying to be a major space power, but its irresponsible third-world tech poses a great danger to the world

For the Chinese Communist Party, even the Wuhan lab leak which caused the Coronavirus Pandemic was a mere accident. Leave alone apologising for killing over 3.3 million people across the globe, China has even refused to accept that it is guilty of creating the ongoing Pandemic.

If an uncontrolled Chinese rocket strikes any of the populated world cities, Beijing would act as nonchalantly as it is acting now. Worse still, if pushed hard on issues like human rights violations, a frustrated China could easily weaponise its ‘out of control’ rockets as a part of its revenge against the rest of the world.

We cannot trust China with becoming a responsible regime, and if the world has to protect its big cities from China’s nasty space program, it must come together to arm-twist the Communist nation and tackle its uncontrolled re-entries.

Coronavirus is China’s bio war on the world. There are undeniable facts that prove it now