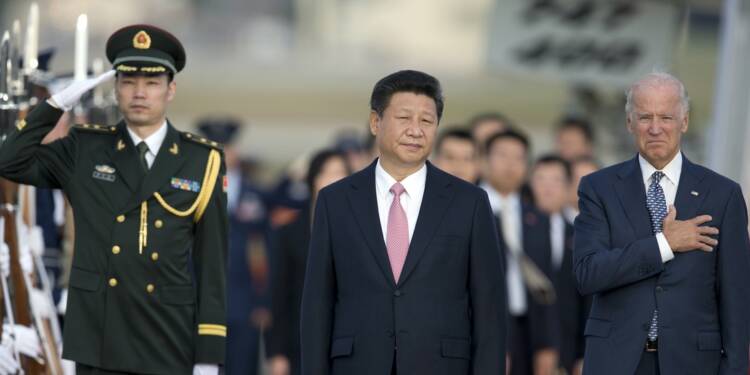 US President Joe Biden has displayed a warm affection towards China through his Asia policy. The Biden administration’s affinity towards China is well documented. It has gone ahead with dismantling and undoing all the feats that the former President had achieved.

Top Biden allies including former Treasury Secretary Jacob Lew and National Security Council official Kurt Campbell have done work for a nonprofit funded by companies like Facebook and Disney that is known for working closely with Chinese officials and Communist Party front groups. Campbell, whom President Joe Biden tapped to run Asia policy at the National Security Council, was a director at the National Committee on U.S.-China Relations through May 2020.

Lew, who served as Treasury secretary during the Obama-Biden administration, took over in January as chairman of the National Committee, which bills itself as an educational nonprofit that seeks open dialogue between Beijing and Washington. Lew, an early endorser of Biden’s presidential campaign, reportedly met with Biden’s team in 2020 to discuss economic policy.

“The National Committee is more that of a business league for U.S. companies in China [and] PRC companies in the U.S.,” said Anders Corr, an intelligence analyst and editor of the Journal of Political Risk. He said the group operates more as “a two-way unregistered foreign agent networking venue than strictly as a U.S. nonprofit organization.”

According to a spokesman for the National Committee, members of the organisation have met with and spoken with officials from the Biden administration. The spokesman told the Washington Free Beacon that since its founding in 1966, the organization’s officials have met with every president’s administration. The National Committee has faced accusations that in its push to develop closer ties to China, it glosses over China’s human rights abuses and foreign influence efforts. The National Committee’s conciliatory approach to China is evidenced in several recent events and media interviews.

In February, Lew held an event for Yang Jiechi, a Chinese official who urged the US to “stop meddling” in China’s affairs by condemning Beijing’s actions in Tibet, Xinjiang, and Hong Kong. At a Jan. 26 event hosted by the China-US Exchange Foundation, a think tank accused of functioning as a front group for the Chinese Communist Party, another National Committee official, former US trade envoy Carla Hills, blasted the Trump administration’s China trade policy.

At the event held by the China-US Exchange Foundation, Stephen Orlins, the president of the National Committee, also spoke. He was on a panel with the president of the Chinese People’s Association for Friendship with Foreign Countries, the Communist Party’s unified front system’s top organisation.

During an interview with China’s state-run television network CGTN on Jan. 23, Orlins praised Biden’s Asia policy team. Campbell is a “terrific” China expert in the government, according to Orlins, who expects him to help fix the “four-year disaster” in US-China ties that the Trump administration has left behind.

Campbell has been questioned about his ties to China. Campbell was also vice chairman of the U.S.-China Strong Foundation, another corporate-backed foundation with ties to Chinese influence groups, according to the Free Beacon.

A representative for the National Committee denied that Chinese or US officials have influenced the organization’s officers. During private discussions with Chinese authorities, its personnel frequently convey worries about China’s human rights record, according to the spokesman.

However, China observers have long claimed that in order to do business in China, American companies must follow the Chinese Communist Party’s lead. The New York Times recently released an exposé on Apple’s concessions to the Chinese government in order to keep its presence in the country. Disney was recently chastised for praising the Communist Party in the credits of Mulan, despite having a senior vice president on the National Committee’s board of directors.

As the corporation tries to overcome a ban on conducting business in China, Facebook CEO Mark Zuckerberg is said to have given copies of Xi Jinping’s book to his workers. During a White House visit in 2015, Zuckerberg reportedly asked Xi about naming his unborn child.

Read More: Dumped by Biden, Ukraine got adopted by China. And now China is making full use of its latest acquisition

American companies doing business in China have been increasingly warned by US officials that they could be targets of influence operations. “To achieve its strategic goal of displacing the U.S. as the preeminent world power, China is coercing and co-opting U.S. business, shamelessly stealing our technology, and trying to influence U.S. policy through both legal and illicit means,” Rep. Devin Nunes (Calif.), the top Republican on the House Intelligence Committee, told the Free Beacon.

Nunes has just launched a probe into China’s exploitation of American businesses to sway US policy. Chubb, an insurance behemoth that paid between $250,000 and $1 million to the National Committee in 2019, is one example of how the National Committee’s corporate backers have adhered to Communist Party edicts.

Chubb said in a statement announcing an equity investment in the state-owned People’s Insurance Company of China in 2017 that its investment would fall “in line with the Chinese government’s drive to promote” its international trade initiatives, including the controversial Belt and Road Initiative. The Chinese government has used Belt and Road to increase its influence in underdeveloped countries.

Read More: China has been fooling the US all this while and Biden’s attempts are naïve – A CCP insider says

Prior to the coronavirus outbreak, the National Committee coordinated trips to China for members of Congress and their staff to meet with Chinese officials and business executives. The all-expenses-paid trips introduced senators to Chinese government officials, as well as representatives from the China-US Exchange Foundation and other front groups.

The events were co-hosted by the National Committee, the Carnegie Endowment for International Peace, the Aspen Institute, and the Rockefeller Brothers Fund, all of which have ties to the Chinese government.