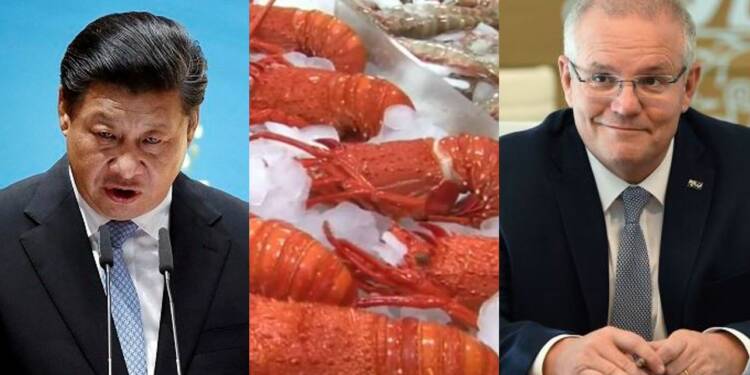 Chinese President Xi Jinping facilitated a unilateral trade war against Australia. The Communist Party of China hiked tariffs on a number of goods ranging from Barley, Australian wine to lobsters. However, the Chinese citizens have lost their cool with the governments pre-dominant anti-Australian policies as Australian lobsters are being smuggled into China circumventing the bans placed by the CCP.

By selling the popular delicacy to Chinese consumers, Chinese e-commerce platforms and wet markets are skirting Beijing’s unofficial ban on Australian lobsters imports. The lobster “grey trade,” fuelled by high demand, is booming, with importers transporting Australian products to Hong Kong and then into Mainland China via waterways.

During a raid in May, Chinese authorities discovered over 569kg of lobster, with a street value of US$19,300. Smugglers’ favourite items were discovered beside the shellfish, including handbags, jewellery, shark fin, and smartphones.

In another case, Chinese authorities seized 100 cartons carrying the famous Western Rock Lobster, weighing 1,274kg. According to the South China Morning Post, the crustacean’s street value is believed to be US$46,500. The growing frequency of shellfish surfacing on the “grey market”—which is technically not illegal—coincides with the Chinese Communist Party’s (CCP) broad-based economic repression of Australian exports.

In November last year, Chinese customs held up several tones of live exports from Australia. Since then the grey trade market for Australian lobsters has grown profusely. As a result, several shipments of the live lobsters were left to die.

Fearing that Beijing would turn its wrath on the lobster trade, Australian exporters quickly diverted or halted shipments. The CCP has targeted a range of Australian products via suspensions and tariffs, fueled by resentment at the Australian government for calling for an independent review into the origins of the COVID-19 outbreak in April 2020.

Exports to Hong Kong increased dramatically from December 2020 onwards, despite Beijing’s retaliatory prohibitions, according to information from the peak industry association Western Rock Lobsters. Monthly exports to Hong Kong had been minimal prior to that, but by April 2021, they had risen to a new high of nearly 400 tonnes.

Exports from Australia to China fell by only $6 billion, or 4%, in comparison to the previous year’s figures. Last year, Australia exported goods worth $148 billion ($US114.8 billion) to China, according to figures supplied by Beijing’s customs office. This is a little decrease from the previous high of $154 billion ($US119.6 billion) established in 2019.

Jinping’s unilateral trade war has backfired. Blackouts in Chinese industries and cities, with rising costs of coal, and other natural resources, and even the Chinese economy has dwindled.

China meddled in the 2016 Philippine elections