Taliban is already getting a taste of its own poison 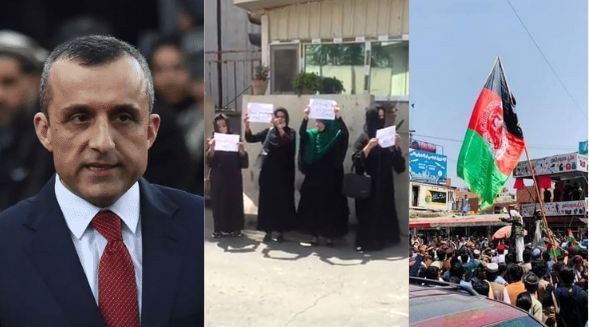 Taliban took over Afghanistan at a stunning pace. But Afghans are now making it clear that the road ahead won’t be a cakewalk for the terror group. All of a sudden, we find that Afghans are opposing Taliban rule. Meanwhile, the Taliban itself seems to be stuck in a tight spot, unable to curb the stiff opposition that it is facing.

Taliban faced the first signs of protests on Wednesday with Afghan youngsters in Jalalabad publicly expressing disapproval for the terror group. The local residents tried to install Afghanistan’s National Flag at a square in the city.

On the other hand, the Taliban resorted to violence and firing which resulted in the death of 3 Afghans. The firing contradicts Taliban’s promise of not breaching peace and sparing its old enemies.

Protest in Jalalabad city in support of National flag.#Afghanistan pic.twitter.com/oxv3GL0hmS

In fact, the Taliban went as far as beating up protesters and journalists in Jalalabad. What the protests in Jalalabad have done is that they have unmasked the true face of the Taliban. The terror group has been claiming that it has ‘changed’ significantly, in order to claim legitimacy and global recognition. However, the death of 3 Afghans and the use of force against innocent protesters proves that Afghanistan is dealing with the same old, brutal Taliban.

After protests against the Taliban in Jalalabad, the terror group is now facing stiff resistance and demonstrations in different parts of the country like Nangarhar, Khost and Bamyan provinces.

Afghanistan’s National Flag was also hoisted by protesters in Kunar-Asadabad as resistance against the terror group grows rapidly.

#BREAKING NEWS VIDEO
Death toll rises to 5 and 17 injured in the city of #Jalalabad , Taliban fighters shooting at protesters

Clash between Taliban fighters and protesters continues
in #Jalalabad , #Bamyan & #Asadabad in #Afghanistan

Afghans actually don’t seem afraid of the Taliban. At great risk of personal harm, they are opposing the fundamentalist terror group with all their might. Videos of Afghan women holding placards and demanding equal rights in Kabul have also emerged on social media.

An Al Jazeera correspondent also shared a clip in which more women could be seen marching through the streets and chanting slogans. Again, protests by women are bound to challenge the Taliban’s fraudulent promise of ensuring rights for women under its rule.

First reported women’s protest in Kabul following the takeover by the Taliban:

A more serious challenge is building up against the Taliban in Panjshir Valley, the only region in Afghanistan to stay out of the Taliban’s control, courtesy of its geographic ruggedness and also the fact that it is fiercely guarded as the birthplace of one of Afghanistan’s greatest sons. Armullah Saleh, who has now declared himself as the caretaker President of Afghanistan, is looking to mount an offence by coalescing a coalition of anti-Taliban forces.

Unlike Ashraf Ghani, Saleh did not flee Afghanistan. For many Afghans, he is becoming a national hero given his courage in standing up to the Taliban. The Afghan Embassy in Tajikistan has gone as far as replacing photos of Ashraf Ghani with those of the ‘caretaker’ President Armullah Saleh. In fact, he was seen in consultations with Ahmad Massoud, the son of the late legendary anti-Taliban commander Ahmad Shah Massoud, in Panjshir Valley.

The meeting between Ahmad Massoud and Saleh has invoked the memories of the Northern Alliance’s resistance against the Taliban after it had come to power in 1996. At that time, Ahmad Shah Massoud had led the anti-Taliban alliance in Panjshir Valley.

It is being said that Afghan soldiers, who had managed to hide from Taliban fighters, are also arriving in Panjshir at Ahmad Massoud’s call. The ‘Northern Alliance’ Flag too has been hoisted for the first time since 2001, in a signal of how armed resistance against the Taliban could pick up in the near future.

And what about the Taliban? How does the Taliban perceive the growing opposition? Well, the Taliban has suddenly realised that its hands are tied. Taliban wants international legitimacy and probably understands that recognition is the only means of staying in power. However, apart from China and Pakistan, no one is ready to even talk about recognising the Taliban.

Canada has plainly refused to recognise the Taliban as Afghanistan’s government. Russia too has made it clear that it has no plans to remove the Taliban’s status as a terrorist organisation, leave alone recognising it.

Meanwhile, China seems to be trying to persuade the United States into recognising the Taliban, but there is not any chance of China succeeding in coalescing support for the Taliban. By supporting a terror organisation, China has bitten off more than it can chew.

Taliban, on the other hand, is forced to play the waiting game. Taliban leaders even met former president Hamid Karzai in their quest to form a legitimate government in Afghanistan.

In order to buttress its case for recognition, the Taliban is feeling forced to make promises of upholding peace, protecting women and minority communities, who are otherwise at the target of Taliban fighters. Now, even as protests mount against the Taliban, the terror group cannot really resort to barbarity because a single mistake can take away all chances of its international recognition.

Therefore, Afghanistan is no cakewalk for the Taliban, and in many ways, the Taliban is facing the consequences of its own wrongs in the wartorn country.