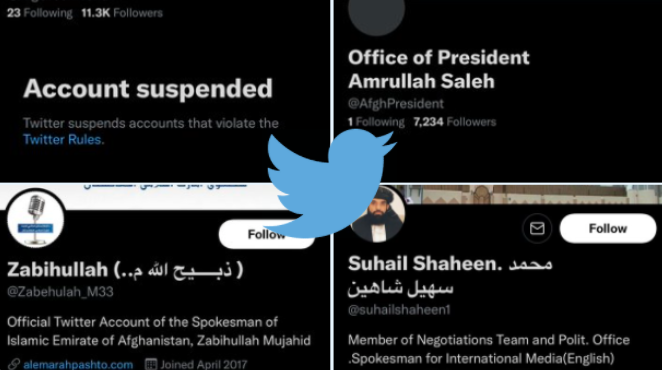 It is really interesting to see the amount of importance Twitter and Jack Dorsey give to a terrorist organisation like the Taliban. Twitter is using its power of reaching out to millions of people and siding with the Taliban at a time when the Afghan government is trying to stand its ground against this takeover. Twitter has suspended Amrullah Saleh’s office’s account while retaining the account of the Taliban, going ahead it will not be surprising that Twitter itself declares the Taliban’s account to be the official account of the government of Afghanistan.

With the take over of most of Afghanistan and the Taliban sitting in Kabul, most of the countries are trying to get their people out of the war-torn country. However, Amrullah Saleh has not given up on the country and its people and has picked up the role of the President of Afghanistan. However, even though the embassies of Afghanistan are putting his portraits, Twitter is suspending accounts of his party.

Twitter suspends Amrullah Saleh’s Office and his Party’s accounts, while Taliban spokespersons continue their propaganda on the platform. pic.twitter.com/B33RKh1zCe

Twitter has found it convenient to suspend Amrullah Saleh and accounts of his party. Amrullah Saleh is the elected Vice-President of Afghanistan and has declared himself the interim President of the wartorn country, as Ashraf Ghani flew to the UAE. Meanwhile, the Taliban continues to remain active on the microblogging platform, which had banned even former US President Donald Trump while he was still in office.

Amrullah Saleh is the new President of Afghanistan. The man has been crucial to Afghanistan progressing under a civilian government since 2001 when the US drove the Taliban back into its caves. Saleh is fast emerging as the “lion of Afghanistan”, and his idol is Ahmed Shah Massoud – recognised as one of the greatest sons of Afghanistan. Amrullah Saleh is a Pakistan hawk, he hates the Taliban from the very core of his heart. He has one mission – to drive Talibani savages out of Kabul and exterminate them. He is not a fan of Joe Biden and his administration in Washington.

Read more: Amrullah Saleh has Russia’s blessings and he is going to rule Afghanistan

Amrullah Saleh is a decisive man. He has worked as a spy and a high-ranking intelligence officer in the early 2000s. Thereafter, he served as interior minister of the war-torn country – which is among the most important portfolios which one could have in civilian Afghanistan. Then, Saleh went on to become the Vice President of the country due to his tremendous connection with Afghan minorities, including Tajiks, Uzbeks and even the Hindus and Sikhs. Today, he has become the President of Afghanistan and is leading a resistance against the Taliban from the lone free province of Panjshir, which the Talibs cannot dare capture because it is simply beyond them to win it.

Before changing his Twitter bio to ‘Acting President of the Islamic Republic of Afghanistan’, Saleh had proudly written “spies never quit” and it is all one needs to know about the character of the person. Earlier, Saleh had vowed to never kneel in front of the Taliban. He tweeted, “I will never, ever & under no circumstances bow to the Talib terrorists. I will never betray the soul & legacy of my hero Ahmad Shah Masoud, the commander, the legend & the guide. I won’t disappoint millions who listened to me. I will never be under one ceiling with the Taliban. NEVER.”

However, it seems that Twitter is taking the side of the terrorist organisation while claiming to be the open platform for all. It should have been the duty of the civilised world not to accept the Taliban despite its enormous propaganda. But it seems that there is a global liberal conspiracy not only to help the Taliban propagate itself as a ‘changed’ organisation but also to buttress a case for its recognition. Twitter is working extra hours to do the same.