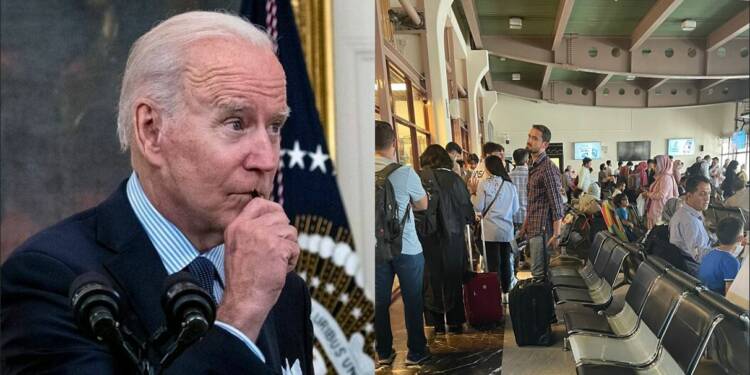 For the longest time of the late 20th century until now, the USA had maintained its military supremacy and a will to go to any ends to even save a few American citizens. This was the exact vibe that the US government has tried to give and outsource via Hollywood’s soft power potential. However, Joe Biden in his very early years of administration has made sure to take such actions which undermine the brand value of the USA and display to the world how low the administration values its people.

The cost of American life has fallen considerably under the Biden administration. It is under his short yet disastrous leadership that the value behind every individual soldier and American citizen has depreciated. Be it the border policy with Mexico which has jeopardized the lives of US citizens on the southern borders, or how it has pulled out of Afghanistan, leaving many American citizens as well as Afghans who have helped them behind. These actions by the Biden administration paint a disheartening picture of the USA’s shift away from the priority of saving individual citizens.

His earlier statements are a testament to Biden’s careless attitude. In 2010, Joe Biden informed Obama’s special representative for Afghanistan and Pakistan, Richard Holbrooke, that the US had to leave Afghanistan regardless of the repercussions for women or anybody else. Biden said, “Operation Allies Refugee [Refuge], which I announced back in July, has already moved 2,000 Afghans who are eligible for Special Immigration Visas and their families to the United States.”

Read more: ‘F*ck that, we did it in Vietnam too,’ Biden knew the Taliban will take over Afghanistan. He just didn’t care

In all this, Biden isn’t even talking about the 86,000 people left behind for the Taliban to slaughter and whose evacuation is America’s moral responsibility. In fact, Biden has botched up the evacuation of not only American interests but also the interests of all other countries in the war-torn nation of Afghanistan. To legitimise his hasty withdrawal from Afghanistan, Biden also said, “Afghanistan political leaders gave up and fled the country. The Afghan military collapsed, sometimes without trying to fight.”

Joe Biden’s State Dept halted a Trump-Era ‘Crisis Response’ Plan aimed at avoiding Benghazi-style evacuations just MONTHS before the Taliban takeover. Militants assaulted the US consulate in Libya on September 11, 2012, murdering America’s ambassador to Libya, an information management officer, and two CIA contractors. The events of that day shook the nation’s security apparatus, resulting in years of recrimination, congressional hearings, and blue-ribbon committees. When the dust had settled, the following discoveries were made: First, Pentagon officials had long warned their State Department counterparts about Libya’s “tyranny of distance” and other portions of North Africa. Second, CIA medics on the ground in Benghazi were critical in saving the lives of diplomatic security officers who were seriously injured.

Finally, considering the “grossly inadequate” reaction time to evacuate the injured from Benghazi, an interagency panel of experts determined that “State must guarantee it has the capabilities to promptly deploy crisis responders and evacuate […] individuals in harm’s way.”

However, it has come out that, Joe Biden has just months before the Taliban sweep over Kabul had halted the plan, making people and American citizens both overly vulnerable. Now while the people of the USA and those who have stayed loyal to them are facing deadly circumstances, Joe Biden has been enjoying an outing away from the press.

With all these actions and how things are going, one can easily deduce that even for its own government, the value of the life of a US citizen has depreciated.