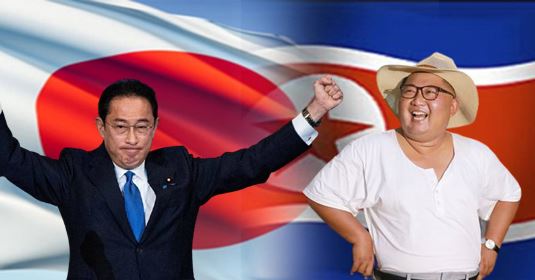 North Korea has a message for the world: It is willing to free itself from the clutches of China should the world brace its nuclear might and help alleviate its economic woes. North Korea despises China like any other country on this planet; it is not fond of communism either. However, the country is exorbitantly dependent on China to keep its economy afloat.

The American sanctions have only pushed North Korea’s allegiance towards China and away from the free world. China has helped the North Korean economy in great proportions, thus fuelling its nuclear operations, along with its aggression against South Korea. But, China’s economy is collapsing now. China’s economic fall would only exacerbate economic woes in North Korea, already reeling under an intense food crisis since the beginning of the year. North Korea now needs a friend that can help it heal its economic wounds and bridge the gap with the outer world. Interestingly, Japan is best suited for the role and is already gearing up for the uphill task.

Read More: Is North Korea set to not only dump China but Communism too? Kim Jong-un’s tirades on ‘ideology’ reflect change

Japan and North Korea share a past overwhelmed with hostility and aggression. Japan inflicted vehement atrocities against Koreans during the colonial rule from 1910 to 1945. After Japan’s defeat in the Second World War and subsequent independence from the Soviets, North Korea adopted a harsh attitude towards Japan. The relations turned most antagonistic in the late 1980s, when the two governments had no remaining substantive contacts. In the early 1990s, Japan began normalization talks with North Korea and issued a formal apology for its 1910-45 colonial rule of the Korean Peninsula.

In recent years, North Korea has also shown its willingness to improve ties with Japan, seeking relief from the diplomatic isolation and plummeting economy. The North is grappling with a massive food, energy and economic crisis. Normalization of relations with Japan also raises the possibility of North Korea gaining monetary compensation for the period of Japan’s colonial rule, a precedent set when Japan normalized relations with South Korea.

The ongoing tensions between North Korea and Japan predominantly stem from the 1970s abduction issue that the new Fumio Kishida administration has vowed to resolve. The Japanese government has confirmed that North Korea had kidnapped 17 Japanese nationals in the 1970s and 1980s; so far only five have returned and 12 are unaccounted for. Now, the families of the remaining 12 kidnapped Japanese nationals are pressing PM Kishida for holding talks with the North Korean regime to solve the issue.

PM Kishida also looks determined and has vowed to seek a summit with the North Korean leader Kim Jong-un. Even during the LDP election campaign, Kishida had expressed his willingness to hold the Japan-North Korea summit to resolve the abduction issue. If any breakthrough is achieved, it could facilitate further reconciliation with Japan. Japan’s ties with South Korea have remarkably improved in the past decade, and any reconciliation between the North and Japan could help the peace talks to trudge forward.

In January this year, Kim admitted for the first time that his economic policy had seriously gone wrong. Kim had made it abundantly clear that solving North Korea’s economic problems would be possible only after “breaking with current wrong ideological viewpoint, irresponsible working attitude, incompetence and obsolete working manner.”

Read More: ‘Accept our nuclear status and we will move away from China,’ North Korea delivers a clear message to the world

North Korea has dropped several hints in the past month alone that signal its intent to normalize relations with the world. It opened communication hotlines with the South this week and has also suggested normalization talks with the Moon Administration. Moreover, North Korea had also refrained from showcasing its new missiles in the September 9 military parade, held to mark the 73rd anniversary of the nation’s foundation.

Biden’s North Korea policy has only helped the tensions escalate in the Korean Peninsula. The US is pressing the North to engage unconditionally with the Biden Administration; however, Kim Jong-un Administration wants Biden to relax the sanctions first. None of them is relenting and it has resulted in a deadlock. Instead, the Biden administration has approached Beijing to help push the peace process in the Korean Peninsula forward.

Peace in the Korean Peninsula would be the last thing that Beijing would aspire to achieve. If North Korean relations with Japan and South Korea get better anytime soon, it would diminish and subsequently eradicate the Chinese influence from the nation. North Korean nuclear apparatus may be a great hindrance in the peace process; however, efforts towards building trust on either side would help create a conducive environment towards yielding peace-oriented results.