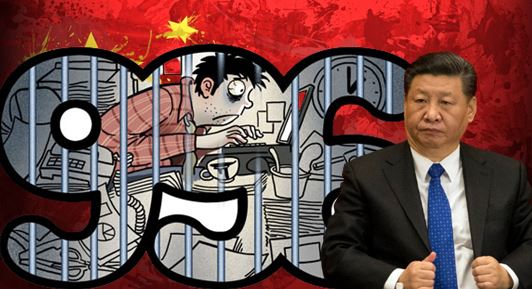 Xi Jinping, the brutal Chinese hunter has been poaching Chinese corporate giants for the past one year. Alibaba, Tencent, and a number of Chinese edutech companies have faced the brunt of Xi’s regulatory crackdowns. But it is the turn of the Chinese corporate sector to respond now and they are responding by destroying Xi’s image in China and instigating a virtual revolt against the Chinese President. The Chinese corporate sector seems to be fuelling widespread dissatisfaction against the Xi administration over the “996” work culture in the communist nation that involves working from 9 AM to 9 PM for six days a week.

The Chinese working class is growing furious with this exploitative work culture, and is mounting pressure on Xi to relax the tough working conditions in the country.

Also read: ‘Grandpa’ Jinping is dumbing down Chinese students so they can be more loyal to him

China has been witnessing protests against the “996” work culture for quite some time now. Chinese youths even launched what came to be known as the “lying flat” (tangping) movement. The movement didn’t involve any sloganeering or active protest, rather it meant lying down and doing absolutely nothing. Such protests can cripple Chinese innovation and economy.

Now, young Chinese workers have intensified their battle by launching a so-called ‘Worker Lives Matter’ campaign. A group of private sector employees in China have launched an online campaign to gather their working hours in order to raise awareness against the exploitative work culture in the communist nation.

Employees in industries like finance and technology are sharing their working hours as a part of the online campaign in China against excessive work culture. As of Thursday, the spreadsheet had over 4,000 entries coming from within tech giants like Tencent Holdings Ltd., Alibaba Group Holding Ltd. and ByteDance Ltd.

Though it may seem as if China’s private sector promotes the “996” work culture for its own benefit, the fact remains that the Chinese Communist Party (CCP) was the one that induced the corporate giants in the country to introduce the “996” culture.

True, companies like Alibaba and JD.com celebrated the “996” work culture. However, they supported the “996” work culture only because introducing such a regime had become a badge of honour for many Chinese firms. It was a means of showing loyalty to the CCP’s goals of pumping economic growth by exploiting the Chinese workforce. This was a part of CCP’s strategy to put China in an advantageous position over the free world.

The “996” work culture is really a part of the Chinese Communist Party’s disposition to treat Chinese workers as slaves. While the “996” regime represents a harsh work culture in Chinese corporate offices, things get far worse in Chinese factories where basic human rights are violated.

Is Alibaba and the Chinese corporate world fuelling anguish against Xi?

The online campaign against the Chinese work culture took the software collaboration site GitHub to declare, “We workers also need to live!”

But it is not just the Chinese workers who hate Xi. Even the private Chinese companies have started hating him. Over the past one year, Xi has made the life of Jack Ma’s Alibaba and several other corporate giants difficult, with antitrust probes and fines for monopolistic practices. In fact, due to Xi’s vindictive actions, Jack Ma’s net worth got reduced to half.

Now, by instigating popular sentiment against the “996” work culture, the Chinese corporate giants are putting Xi in a tight spot. After all, Xi is the Chinese President and the Chinese workers blame him for their misery instead of blaming any of the famous CEOs or business leaders.

“Shanghai Faction” may be involved

Given a chance, Alibaba and other corporate giants would want to instigate a rebellion against Xi Jinping. Moreover, there is this “Shanghai Faction” involved. Jack Ma and almost all other Chinese tech billionaires are closely connected to the “Shanghai Faction”, which is a group of people considered close to former President Jiang Zemin.

Also read: Putin’s secret war on China: The Russian President is hobnobbing with the Shanghai faction to get China back on track

This faction supported Alibaba’s rapid growth before Xi Jinping took charge of affairs. The Xi era has however been different. The problem for Ma and other successful Chinese tech entrepreneurs is that the sitting Chinese President considers the “Shanghai faction” a political challenge and many top officials purged by the Jinping administration have been Zemin supporters.

The “Shanghai Faction” however remains politically influential and also resourceful because of the widespread support that it enjoys from billionaire entrepreneurs. The “Shanghai Faction” therefore wants to reassert its control in the CCP at Xi’s expense and it doesn’t mind if a popular protest over the “996” culture leads to Xi’s downfall.