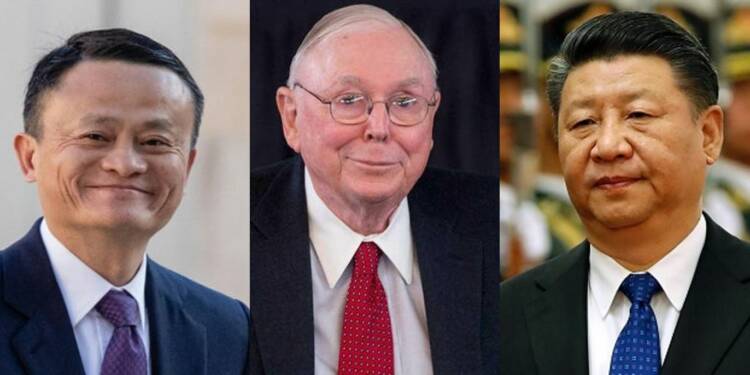 Jack Ma’s Alibaba hasn’t been in news for very good reasons for almost the past one year. After all, Chinese President Xi Jinping is cracking down on Jack Ma and Alibaba relentlessly. Yet, there is finally some good news for Alibaba – legendary investor and Warren Buffet’s longtime partner Charlie Munger has doubled his stake in Chinese internet giant Alibaba Group Holding (BABA).

Charlie Munger, who is 97-year, has doubled his stake in Alibaba through Daily Journal DJCO. Yet, the question is why Munger, who gets his stock market bets right more than 9 out of 10 times, is investing in an internet giant like Alibaba? After all, Alibaba is facing one of its worst times with Xi’s vindictive actions. And do Munger’s investments hint at the exit of Xi Jinping who has been literally trying to destroy the Chinese internet giant.

How Xi is trying to destroy Alibaba?

Xi Jinping is doing everything under his control to mount trouble on Jack Ma and Alibaba. The Xi administration has launched antitrust probes against several of Alibaba’s business ventures over the past one year and Alibaba has been fined for monopolistic practices too.

Xi is cutting all big businesses to size and China’s Securities and Exchange Commission has even delisted some companies, though Tom Hayes, chairman and managing member of Great Hill Capital, pointed out that Alibaba’s auditor is PwC and it is unlikely that Chinese listings with such big auditors would be removed.

Moreover, Xi Jinping’s vindictive character also tends to get personal. After the CCP-Alibaba showdown, Jack Ma himself went missing for some time. A paranoid Xi followed up his antitrust probes and other such vindictive actions against Alibaba with similar actions against other Chinese tech giants and edutech entrepreneurs.

Ultimately, Xi’s actions led to Jack Ma’s net worth getting reduced to half in less than a year. Ma, who was once the richest man in Asia, remains China’s most popular billionaire yet Xi wants to destroy him instead of celebrating him. However, Alibaba’s business remains too big to be destroyed even for someone like Xi Jinping.

Xi had cracked down on Jack Ma and other billionaire entrepreneurs for one particular reason. Jack Ma and almost all other Chinese tech billionaires are closely connected to the “Shanghai Faction”.

The “Shanghai Faction” is a group of people considered close to former President Jiang Zemin. This faction supported Alibaba’s rapid growth before Xi Jinping took charge of affairs. The Xi era has however been different. The problem for Ma and other successful Chinese tech entrepreneurs is that the sitting Chinese President considers the “Shanghai faction” a political challenge and many top officials purged by the Jinping administration have been Zemin supporters.

Therefore, Xi’s problems with Ma are completely political. The CCP is divided into several factions and each faction wants to consolidate the maximum possible power. The “Shanghai Faction” remains highly influential because of the money that tech entrepreneurs and other rich businessmen connected to it mint regularly.

When people like Ma and other tech entrepreneurs make the “Shanghai Faction” rich and more powerful, Xi gets enraged and starts cracking down on businesses like a madman.

Xi in danger of losing power:

We swing back to the main issue- why is Charlie Munger investing in Alibaba? After all, if an ace investor bets on a stock, he does it for a reason. Either he has come to know something which others haven’t heard of, or he has simply read something between the lines which prompted him to invest in Alibaba.

In any case, it is almost certain that between Xi and Jack Ma, Charlie Munger is backing the latter. What he has probably understood is that Xi Jinping is facing a major revolt inside China. In fact, Xi has been looking quite timid of late. He has been cracking on every possible individual and institution including the Chinese People’s Liberation Army, Premier Li Keqiang and Vice President Wang Qishan.

Moreover, Xi is facing a strong wave of anti-incumbency due to tumbling stock markets, power outages and a bursting real estate bubble. The people of China must have understood how Xi’s ill-thought trade wars with Australia and an unofficial ban on Australian coal has led to blackouts all across the Communist nation. In fact, it has also been reported that there was an attempt on Xi’s life.

When everything settles down in China, Xi will have a hard time explaining his terrible decisions and saving himself from what seems like an imminent coup. This is what probably explains decision of Charlie Munger to bet heavily on Alibaba.