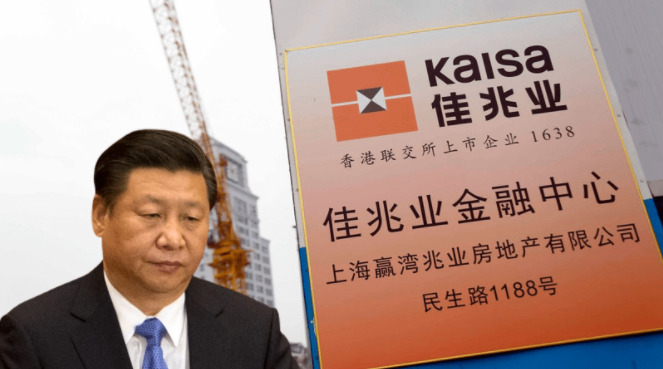 Fall of Kaisa Group – China’s once-promising real estate sector has gone completely bust. With it, all hopes of the Chinese economy recovering anytime soon have also been slashed. China’s real estate crisis is so tremendous that it threatens to disrupt global markets and affect economies around the world. So, there is no way China is itself escaping the menace it has birthed due to flawed fiscal policies and a hostile business environment which is only worsening under President Xi Jinping’s brutal rule. If you thought the Evergrande crisis was the biggest worry for China – brace yourself for a slew of Chinese real estate giants defaulting on their loan obligations.

In the most recent addition to a mounting real estate crisis in China, shares of Kaisa Group, a Shenzhen-based developer, were suspended from trading on Friday in Hong Kong. While Kaisa Group did not disclose more details for the reason behind the suspension, it had said the previous day that it was facing “unprecedented pressure” on its finances. Trading in shares of Kaisa Group and three of its units was halted in Hong Kong on Friday after one of its businesses missed a payment on a wealth management product.

Chinese state-run financial newspaper Securities Times reported on Thursday that the company told the outlet about its liquidity issues, and admitted to missing a payment related to its wealth management products. CNN noted that the Chinese state media reported how Kaisa Group said that it was experiencing multiple headwinds, such as a challenging real estate market environment and the recent downgrading of its credit ratings by international agencies.

On Thursday, after Kaisa’s crisis was made public, the company’s shares crashed by about 15%. Already, the company’s shares have fallen by 70% this year. Fitch Ratings and S&P Global Ratings downgraded Kaisa Group last week. Both agencies cited the firm’s diminishing cash flow. According to Natixis, Kaisa Group ranks only second to Evergrande when it comes to issuing U.S. dollar-denominated offshore high-yield bonds. Additionally, as of the first half of this year, Kaisa Group had crossed two of China’s three “red lines” for real estate developers that the CCP regime outlined.

According to Fitch Ratings, meanwhile, Kaisa Group has a large amount of debt due between now and end-2022, including $400 million due in December, and around $3 billion due in 2022.

China’s Real Estate Sector Collapses Like a House of Cards

The Evergrande crisis of China led to a series of companies in China defaulting on their huge loans. Modern Land China has become the latest developer from Asia’s largest economy to miss a dollar bond payment, underscoring the stress spreading across the sector in China. Earlier, Fantasia Holdings, Sinic Holdings, and China Properties had all defaulted on offshore notes. Modern Land China missed a dollar bond that is listed on the Singapore Stock Exchange, essentially meaning that the Singapore stock exchange will also suffer as collateral for all major Chinese companies’ bonds and shares listed with it and running into defaults.

Fantasia Holdings Group failed to repay $206 million in debts due on October 4. The Fantasia Holdings Group had raised $500 million in the year 2016. The debt fell due in 2021, but the dismal position of the Chinese real estate market has crippled the property developer. Fantasia’s repayment default has corroborated concerns of a market contagion arising out of Evergrande’s imminent downfall. The fact remains that much of China’s real estate market growth is not based on user activity. This is why the debt-driven real estate sector of China is suddenly staring into a deep crisis.

How the CCP Invested in a Dying Sector Mindlessly

For years, China’s housing sector drove its rapid economic growth and helped the CCP to maintain households’ net worth. Indeed, the real estate sector was exorbitantly crucial for China to keep its economy from faltering. A notion was created that the real estate sector is insulated from any financial crisis and Beijing will go to any extent to keep it afloat.

Read more: China created an ‘invincible’ real estate sector, but it turned out to be a cruel myth

Housing projects were launched in great numbers despite slowing urbanization, and the debt kept flowing into the massive projects owing to the speculative fervour that kept the lenders enchanted and optimistic. The housing bubble kept ballooning until this summer when China realized that the skyrocketing housing prices despite lower demands could lead to a disaster in the Chinese financial markets.

Construction kept powering the Chinese economy, which was enough for the Chinese rulers to facilitate the rise of China’s real estate sector. Data from the central bank reveals that about 27% of bank lending likely goes to the real estate sector in China. Moreover, a considerable proportion of non-bank lending from trust companies and various asset management companies also goes to developers.

The Chinese economy banked on the real estate sector enormously. Now, there is simply no developer in China who is not feeling the pain of the crisis which has engulfed the sector. With a power crisis underway in the country, manufacturing and industrial output taking severe hits and the real estate sector going completely bust, the Chinese economy seems to have stepped foot into its grave.