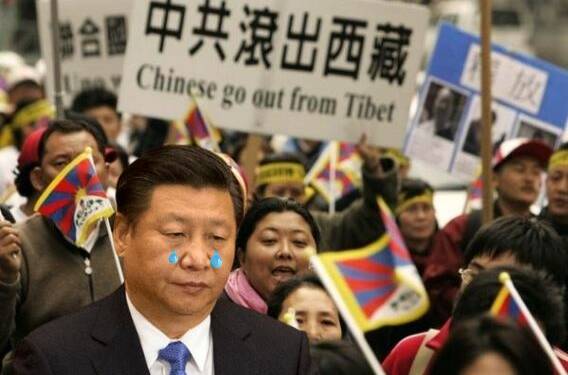 It was in 1950 that the newly established Peoples Republic of China (PRC) had launched an invasion in Tibet, which until then, was a free and sovereign region with a unique culture that bears little to no resemblance to that of China. The Chinese armed forces marched across Tibet until early 1951 and established Chinese control over the region subsequently. Back then, scores of Tibetans, including the topmost leader of the Tibetan Buddhist order – the Dalai Lama had fled to India seeking refuge. India provided a safe shelter to Tibetan refugees, and today, the community is thriving in the country and has even set up a Tibetan government in exile at Dharamshala.


Tibetans who remain under the brutal rule of China know what they are missing out on. They are missing out on freedoms, free speech, liberty, democracy, secure life and above all, their resources. China has launched a campaign to subjugate Tibet even further, and this involves grabbing the land of poor Tibetan civilians, promising them ‘development’, but never actually paying compensation for the land taken over. It is pretty much a racket which the Chinese Communist Party is running in Tibet. Now, the people of Tibet are rising against the CCP’s land-grab tactics.

Tibetans Beat the Hell out of CCP Officials

Tibetans have mastered the art of patience, meditation and also, decisiveness. So, if the Chinese Communist Party thought its rule over Tibet was only going to get easier here on, it’s in for a big surprise. Bruised Chinese officials who most likely cried their hearts out after being beaten by Tibetan civilians are testimony to the same.

According to Radio Free Asia, Tibetan villagers and Chinese officials clashed this month over the failure of authorities to pay compensation for land taken for a construction project. The clash took place on November 10 in Domda village in the Yushu Tibetan Autonomous Prefecture in Qinghai. According to a Tibetan source quoted by RFA, “No one was allowed to record any videos or take photos of the commotion, and no one was hurt. However, this land issue has become very critical now, and all construction work has been halted for the time being.”

The CCP had earlier this year seized a large parcel of land from Domda residents. The Xi Jinping-led Chinese regime promised compensation to all Tibetans whose land had been taken over. However, the project on the land has started, but there is no sight of compensation for the Tibetans who lost their land. The RFA source added, “So some local Tibetans from the village went to the construction site last week to halt the work until they are compensated for their land.” The shamelessness of the CCP was put on glaring display as the Chinese officials threatened the Tibetans when they pressed their claims.”

Tibetans Revolting Against the CCP Instead of Joining the PLA

In a bid to perhaps save face in the Himalayas, where it has gotten embroiled with the battle-hardened Indian forces, the PLA had earlier this year begun a desperate lookout for Tibetans to serve China as soldiers. Essentially, the CCP was working out a mechanism where Tibetans help the Chinese state in colonising Tibet, which is already a victim of illegal Chinese occupation.

However, this effort has proven to be a disaster like no other. As reported by TFI, despite China’s all-out effort to recruit Tibetans in the People’s Liberation Army and para-military outfits, the response from Tibetans has been tepid. This, despite the strongarm tactics and efforts by the CCP to force monks to bless the recruits. Times Now had originally reported how in the westernmost part of Tibet, adjoining Ladakh, the PLA had laid down the law: one young man from every household and despite all that and a handsome stipend, only 63 have joined the Chinese army so far.

Xi Jinping Setting Up a Rat-Trap for Himself in Tibet

The cherry on the topping came in the form of a foolish law which the Chinese Communist Party passed late last month to strengthen land border protection amid the ongoing military tensions with India. The legislation formalises combining the military defence of China’s land borders with improving social and economic development in border areas. The central theme of the law is for China to build border settlements in Tibet and shift Tibetans to these settlements.

China believes that if it erects border area settlements, villages and towns across the Indo-Tibetan border, India will be unable to launch military offensives against the communist nation. China also thinks that if it settles Tibetan civilians right at the border with India, they will serve as the Communist nation’s first line of defence. However, as explained by TFI, the Tibetans who will be placed close to the border with India will help the Indian Army!

Tibetans are now physically taking on the CCP and its louts. Tibetans are no longer willing to have their lands snatched from them and their freedoms trampled upon. Tibet is beginning to rise against China, and this is the cue for the world to step up the rhetoric against China’s illegal occupation of Tibet.