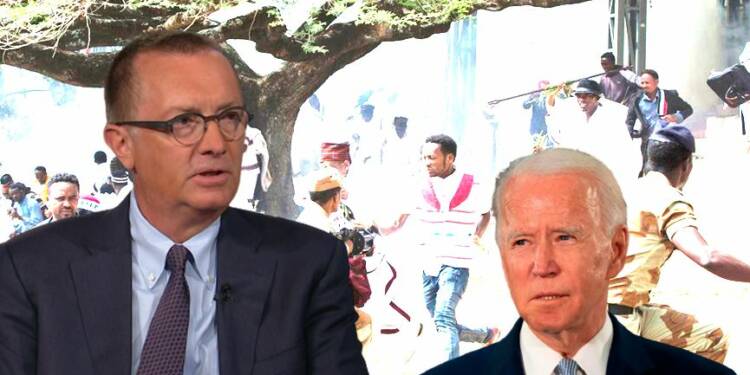 The Biden administration is facing resistance from within, when it comes to its plans of spilling a bloody conflict all over the Horn of Africa. The realities of the region are starkly different from what Joe Biden thinks them to be. Any escalation of violence in Ethiopia could soon spill over into neighbouring countries like Eritrea, Sudan and Somalia, and inevitably impact the flow of world trade through the Bab-el-Mandeb Strait. By dominating the Horn of Africa, the USA can dominate the Bab-el-Mandeb Strait, which connects the Red Sea with the Gulf of Aden, and through which much of global trade passes.

The USA can dominate this strait only if it controls the Horn of Africa, and to establish that, it is pushing Ethiopia into a civil war. But people from within the administration are now beginning to see the catastrophic consequences of Biden’s bloodlust. So, they are subtly trying to dissociate the US from violence, and are vouching for diplomacy. This comes in the backdrop of Biden’s ecosystem pushing a narrative favouring US boots on the ground in Ethiopia, to take control of the situation.

The man who Biden tasked with ensuring that tensions escalate in the Horn of Africa, has returned from Ethiopia. Upon touchdown in Washington, he immediately called up reporters and sounded caution over any military action that could escalate the crisis brewing in Ethiopia. US Special Envoy for the Horn of Africa, Jeffrey Feltman said last Tuesday that there was “massive” progress trying to get fighting sides in Ethiopia to a negotiating process, but he warned that there was no military solution.

He was quoted as saying, “What concerns us is this fragile progress risks being outpaced by the alarming developments on the ground that threaten Ethiopia’s overall stability and unity…After more than a year of fighting and hundreds of thousands of casualties…it should be clear that there is no military solution.”

According to Al Arabiya, Feltman also delivered a strong-worded warning to the Tigray fighters, asking them to halt their advance on Addis Ababa. If they don’t stop, he said they could face “unrelenting hostility”. He also sided with Ethiopian Prime Minister Abiy Ahmed’s priority of pushing the Tigray fighters out of regions they were occupying, as the Horn of Africa envoy said, “We share that objective.”

Feltman’s support for Ethiopia is unprecedented:

Jeffrey Feltman is a man considered to be close to the CIA (Central Intelligence Agency). So, when Biden deployed him to the Horn of Africa, he had one mandate – instigate chaos in Ethiopia. However, after having spent some time on ground zero, Feltman seems convinced that violence and military intervention is not the way to go forward. And then, the conflict could cascade into something much bigger than what Biden imagines.

The UAE is supporting Ethiopia against Tigray militants. It has been reported that the UAE has even provided its drones to Ethiopia’s forces, using which they are neutralising the TPLF (Tigray People’s Liberation Front). Additionally, the UAE is admittedly sending tons of medical and other aid supplies to Ethiopia.

And then, there is the Russia angle. The people of Ethiopia are staunch supporters of Russia. Any US military intervention, therefore, will not go unanswered by Moscow, which might pull a Syria-like rug from right under Washington’s feet. Russia will also be motivated to prevent Africa from being consumed by a devastating conflict, which would put its own interests in the continent in harm’s way.

Also read: After Djibouti refused to allow a US attack on Ethiopia, Biden turns to Sudan to start the war

Finally, the people of Ethiopia are beginning to realise that Joe Biden is playing with their lives only to achieve his own geopolitical goals. So, if they decide to kick the USA out of the region, Washington DC will lose the Horn of Africa for a very long time. That runs in complete contestation of what Biden has planned for.

Jeffrey Feltman has understood that the USA cannot resort to any misadventures in Ethiopia, as the conflict which ensues thereafter could blow up in America’s face. He is therefore defying the diktats of Biden, and speaking his mind out.