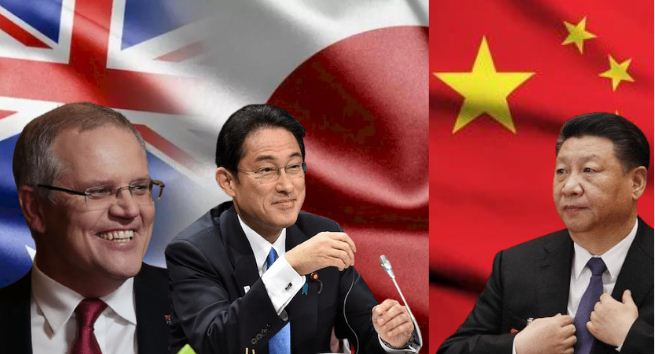 So, we are talking of an era in which Scott Morrison and Fumio Kishida find Xi Jinping in between and crush the Chinese People’s Liberation Army (PLA) from both sides. In fact, Australia is already a part of the ASEAN defence hotlines, or what is officially called the ASEAN Direct Communications Infrastructure (ADI). And Japan too has decided to join it.

Japanese Defence Minister Kishi Nobuo announced that Japan will join the defence hotlines set up among the Association of Southeast Asian Nations (ASEAN) members. During his talks via videoconference with Brunei’s Second Defence Minister Dato Paduka Seri Haji Awang Halbi bin Haji Mohd Yussof, he confirmed that Japan will join and make the best use of the ADI. Australia has already joined the ASEAN defence hotlines.

By joining the ASEAN defence hotlines, Australia and Japan are breaching the wall of pro-China elements inside the ASEAN.

China is a manipulative power. It divides ASEAN by playing into the various divisions within the intergovernmental bloc. It is also exploiting its nexus with Cambodia, the sitting ASEAN chair, to mute ASEAN’s criticism of China even though Beijing keeps staking claim over the entire South China Sea.

But with Japan and Australia getting in, countries like the Philippines, Vietnam, Singapore, Indonesia, Malaysia and Brunei that actually hate China and want to give the Chinese PLA a bloody nose will get emboldened. Morrison and Kishida are, thus, radicalising anti-China sentiment in the ASEAN.

Within the ASEAN, Indonesia recently invited Brunei, Malaysia, the Philippines, Singapore and Vietnam to convene next year as a part of the ASEAN Coast Guard Forum, which met virtually in October. And now, Japan too has joined the ADI. This is a message to the anti-China faction in the ASEAN— go ahead and sharpen your defences, Japan and Australia are with you.

Remember, in July, the Japanese ambassador to Australia Shingo Yamagami said that the Sino-Japanese ties were no better than the strained Sino-Australian relations. Yamagami had then offered, “Don”t worry. You are doing an excellent job. We are in the same boat and we should work together.”

So, Japan and Australia wanted to work together. And now they have joined the ASEAN. All this points to a single factor— Taiwan. Remember, Taiwan is itself becoming the centre of attention with even Singapore resuming military cooperation with the island nation and signalling that it can dump China for Taiwan.

Australia has already made it clear that it would be “inconceivable” for it to not join a US military action defending Taiwan. Defence Minister Peter Dutton said, “(China’s) been very clear about their intent to go into Taiwan and we need to make sure that there is a high level of preparedness, a greater sense of ­deterrence by our capability, and that is how I think we put our country in a position of strength”.

Japan has tied up its own security with the defence of Taiwan, and is quite clear about going to war with China, should the Communist nation attack the island nation. By joining the ASEAN defence hotlines, Australia and Japan are, thus, also coming closer to defending Taiwan.

China must be very afraid. It will have to take a lot of beating from Australia and Japan, if it bullies any of its ASEAN rivals or Taiwan.