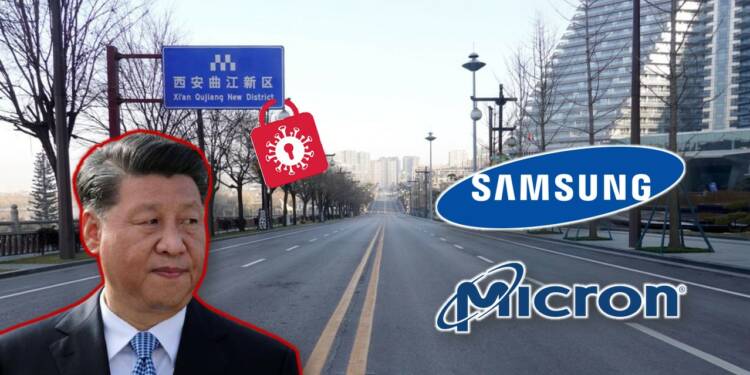 Since last week, China has been facing a major threat – growing COVID-19 cases in the northern Chinese city of Xi’an. And then, a recent outbreak of epidemic haemorrhagic fever is making the health crisis even more severe. China has locked down 13 million people of the city for the past week but has failed to contain rising infections, and it is now trying to impose even harsher measures. But things may have already slipped out of Beijing’s hands. The ancient city in Shanxi province has reported 1,117 total cases in the latest outbreak. The lockdown which has been put in place in Xi’an mimics the kind of brutal phase that Wuhan underwent in early 2020.

But Xi’an is much more important to China. Guess why? It houses at least two massive chip production facilities, one belonging to Samsung and the other to Micron. Samsung’s memory chip operation in Xi’an is one of the largest foreign projects in China. The tech giant has two production lines in Xi’an making advanced NAND Flash products, which account for 42.5 per cent of its total NAND flash memory production capacity and 15.3 per cent of the overall global output capacity. What does that tell you?

China is about to be hammered by a major chip shortage all over again!

China Lies About Extent of Disruption to Chip Manufacturing

China is going through what can be referred to as a very tough phase. The eyes of the world are on China. Meanwhile, ever since the pandemic first began, several multinational corporations and manufacturers have decided to cut down dependence on China and wrap up their bases from the Communist nation. An exodus of companies is currently underway in China. As such, the CCP simply cannot afford to tell the truth about Xi’an and its Covid-19 outbreak.

So, Global Times did what it does best. According to Global Times, foreign high-tech manufacturers have seen only a limited impact on their operations in Xi’an. The CCP mouthpiece said China was ensuring smooth business operations amid epidemic prevention, while falsely stating that countries like India experienced massive factory and manufacturing disruptions over the past two years.

Samsung and Micron Spill the Beans

China’s lies could not stick around for long. Samsung Electronics and Micron Technology have now come out and warned that strict COVID-19 curbs in the Chinese city of Xi’an could disrupt their chip manufacturing bases in the area. On Wednesday, Micron said curbs could cause delays in the supply of DRAM memory chips, widely used in data centres. According to Reuters, the chip manufacturer added that stringent restrictions, which went into effect earlier this month, maybe increasingly difficult to mitigate and have resulted in thinner staffing levels at the manufacturing site.

Samsung, meanwhile, said it would temporarily adjust operations at its Xian manufacturing facilities for NAND flash memory chips. This shows how all is not well on Samsung’s end as well, which has already resorted to emergency procedures for ensuring some sort of normalcy in chip production. A prolonged outbreak, however, would hurt Samsung’s manufacturing as well.

The issue at hand is not just that of manufacturing. The Xi’an lockdown also means that the chip manufacturers will have to face massive logistics issues, which will only worsen their supply issues. Considering the fact that China uses most of the chips manufactured in Xi’an domestically, the red rogue nation has a lot to brace for in the coming days.

China has not seen calm since 2019. Ever since the pandemic first broke out in Wuhan, China has been chasing the virus like a mad dog, albeit unsuccessfully. Local outbreaks in one city after the other have plunged major urban centres of the country into repeated lockdowns. Now, in Xi’an, China faces its worst outbreak since Wuhan. The lockdown and strict restriction will motivate foreign manufacturers and companies to pack up and get out of China as soon as possible.

For foreign players, it is becoming increasingly difficult to conduct business in China. And then, they are being lured by the likes of India, Japan and Southeast Asian countries to shift manufacturing facilities out of China. Apple, Samsung, LG, Nike, Adidas, Puma and many more companies are in the process of cutting down on their China-centric operations. With the Xi’an outbreak, this exodus will be speeded. Companies have realised that operating out of China is a painful exercise that is completely avoidable, which is why they will take corrective measures by shifting base to other manufacturing centres across the Indo Pacific.

Xi’an Struck by a Food Crisis

Residents in the locked-down Chinese city of Xi’an said they were struggling to find enough food. People from within the city were quoted by AFP as saying they are “struggling to get the food they need on time”. Another woman who spoke to AFP said, “I have rice at home… I have several eggs left – one per meal, one meal per day.” That’s right. People in Xi’an are now eligible for only one meal per day. Talk about the perk of living in a Communist state!

Interestingly, China’s intense lockdown in Xi’an does not allow any family member to step foot out of their houses, even for securing essential supplies once a week. The people of Xi’an are completely at the mercy of the Chinese state. Some might receive stale food supplies, while others will simply have to make do with whatever they have at home, and in extreme cases, starve.

No foreign company wants to operate in such conditions. Which is why China is about to face a massive exodus of chip manufactures and other companies soon.