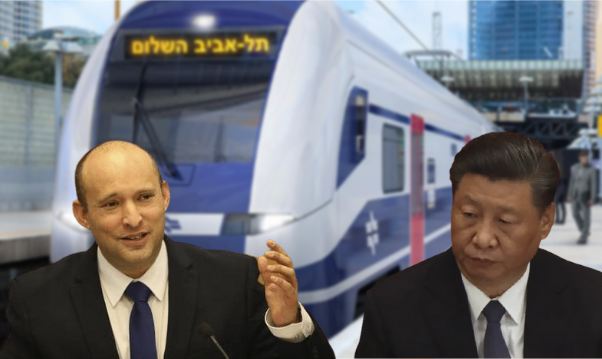 China is a notorious country, that has been trying to make inroads into the Middle East. In the last week of January, Israel and China marked three decades of diplomatic relations by holding a virtual meeting on innovation cooperation.

Almost immediately, Israel kicked China and its dirty CCP-linked companies out of its light rail project in and around Tel Aviv. Sounds brutal, right? Well, Israel is infamous for acting decisively when its national security and strategic interests come under threat. And with China, threats come in abundance. You see, Tel Aviv has been annoyed with Beijing for quite some time now.

As a result of the same, Israel has rejected Chinese companies that sought to build more lines of the Tel Aviv light rail. According to the Jerusalem Post, Alstom, a French company, and Israeli companies Dan and Electra won the Green Line tender, while Shafir, which is also Israeli, and the Spanish company CAF will build the Purple Line.

The decision to kick China out of the light rail project was taken by the Israel-government funded company responsible for the project – NTA Metropolitan Mass Transit System Ltd.

Last month, it was reported that the Israeli government’s China policy would be made clear with the outcome of the light rail bids and whether Chinese companies win the tenders for light rail projects. They have not been allowed to win such tenders, and this means the Naftali Bannet-led Israeli government has decisively dumped China.

A senior Israeli diplomat had said in January that Israel is on the American side if it has to choose a side, and won’t fight with Washington over China. The United States has been pushing Israel to distance itself from China, and not allow Beijing to get involved in important infrastructure projects in the Jewish nation.

As reported by TFIglobal last month, the Biden administration and the Israeli government held low-profile consultations in December 2021 on China. The meeting on December 14, led by deputy national security advisers from both sides, was the first wide-ranging consultation between the two countries on China since Joe Biden took office.

After these consultations, Israel is known to have assured the United States that it will notify Washington about significant deals it strikes with China and said it would re-examine these deals if the opposition is raised.

China has invested heavily in the Israeli economy. The most important of all Chinese investments is, of course, the Haifa port, which is seen as an important milestone in China’s BRI project. The port is slated to fall in the hands of SIPG, a Chinese government company, on a 25-year lease.

But Haifa port is not the only Chinese investment in Israel that now stands threatened because of a possible rift between the two countries. Chinese companies are also building an Israeli port in Ashdod and have been involved in the light railways project running through the greater Tel Aviv area. The rail project is sensitive as it will pass in great geographical proximity to the Israeli military headquarters.

Within one month of our report, Israel has kicked China out of the light rail project – thereby securing its national interests in a big way.

The light rail project is just the start. Soon, China will find itself being jolted out of every Israeli infrastructure project. Tel Aviv will also dissociate from the Communist nation, and that will trigger China to degrade its relations with the Jewish nation. The best part is that it will all be happening for Israel’s benefit.