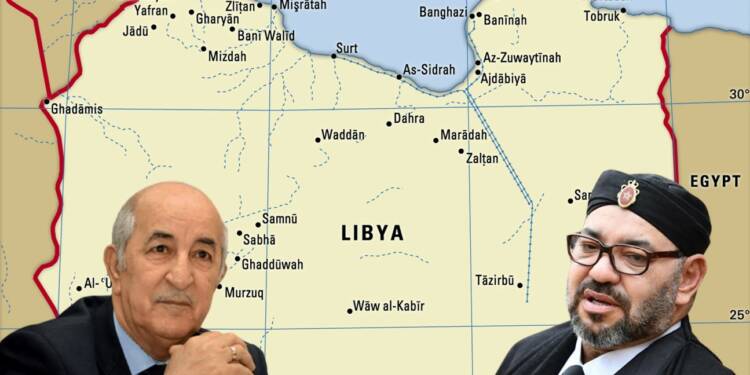 When you consider countries like Libya, all you can think of is big powers like the EU, Russia and the US rushing in to control what seems like endless internal chaos. But look closely and you will find many Middle Eastern and North African actors involved in the entire tumult who are trying to fight it out for greater influence in the war-torn country.

Of all regional actors, it is, however, Morocco and Algeria who are closely competing for influence in the North African country. And with Morocco’s latest outreach in the form of reopening of a Consulate in the war-torn country, it seems that Morocco is winning the battle with the support of its new friend- Israel.

The Libyan Ministry of Foreign Affairs has stated, “A delegation from the Kingdom of Morocco arrived in the capital, Tripoli, headed by the head of the affairs of the Arab Maghreb Union at the Moroccan Ministry of Foreign Affairs and includes several senior officials of the ministry, to prepare for the reopening of the Moroccan consulate in Tripoli after an eight-year closure.”

Libya is just recovering from years of civil war, and few countries including France, Spain and Algeria have resumed diplomatic activity in the country. So, being able to reopen its Consulate in the country is a significant diplomatic achievement for Morocco. And for Algeria, which wants to limit Morocco’s role in the country, this is a major setback.

Algeria and Morocco fighting for Libya

Algeria and Morocco have been fighting for greater influence in Libya for quite some time. While Morocco claims that it wants Libya to find its own solution to the ongoing political chaos, Algeria dismisses Morocco as an outside party and claims a special interest in Libya as a neighbour.

Morocco and Algeria are neighbouring rivals too. They have been fighting bitterly over the disputed Western Sahara territory. So, Algeria considers greater Moroccan influence in its neighbouring Libya as a security nightmare for itself.

For Morocco, however, Algeria is not the only problem. The Biden administration has been supportive towards Algeria and has been even disowning the Trump-era policy of bringing Rabat and Jerusalem closer, while also forging closer ties with Morocco.

Read more: Away from the media limelight, the Algeria-Morocco border is developing into a WW3 situation

And Algeria is also emerging as a major supplier of gas to Europe. So, the EU also favours Algeria over Morocco because it feels that it can substitute Russian gas supplies with Algerian gas supplies. This is the EU’s attempt to get rid of overdependence on Russian gas. Moreover, Spain also is at odds with Morocco, which further isolates the latter. This is why Morocco wasn’t able to expand its influence in Libya. Rabat did play a part in the Libyan peace process but its role was scuttled by Algeria time and again. However, this is clearly changing now.

While nothing seemed to go right for Moroccan diplomacy, Rabat did manage to sign a Trump-brokered Abraham Accord with Israel in 2020. Biden did shift the US foreign policy in Algeria’s favour, but Israel and Morocco have remained friends.

And as it turned out, Israel itself has managed to get Turkey to comply with it in the region. Turkey, on the other hand, did have a lot of influence in Libya and Israel is now exploiting the advantage that Ankara once enjoyed in the war-torn country. So, the US and the EU may do what they want, but Jerusalem has Rabat’s back and that has helped Morocco establish a strong foothold in Libya.

Algeria stands outcompeted in Libya, and this is a great victory for Morocco in the war-torn country.