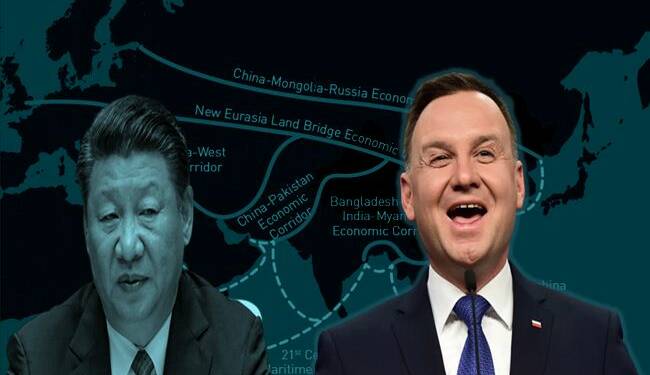 When Polish President visited Beijing for the ongoing Winter Olympics, he got an interesting and rather desperate offer from his Chinese counterpart Xi Jinping. Make Poland China’s gateway to Greece.

Behind Xi’s offer to Europe is a history of failed attempts to make inroads into the European Continent via the Mediterranean countries of Italy and Greece. So, China is looking at a new entry point through Poland.

President Xi Jinping personally discussed his ambitions of making Poland a logistics hub during his meeting with Andrez Duda, who was the only elected European head of State to attend the Winter Olympics amidst the mass diplomatic boycott that the Games witnessed.

A Chinese statement released on Sunday noted, “President Xi expressed China’s readiness to take an active part in Poland’s endeavour to build itself into a logistics hub and to support Poland’s effort to become a key point in China-European Union industrial and supply chains.”

The statement added, “The two sides also need to seek more synergies in development strategies such as China’s Belt and Road Initiative, China-CEEC cooperation and Poland’s programme to boost the economy after the pandemic, and tap into their potential areas like trade, investment, transport, logistics and high-technology, so as to bring bilateral practical cooperation to new heights.”

Duda’s office is yet to release a statement about the developments. However, the statement issued by the Chinese side claimed Duda had expressed hope that Poland could “become China’s gateway to Europe”.

Why is China looking at the Polish “gateway to Europe”?

Now, China’s official statement makes it clear that the Communist country is desperate to make Poland its “gateway to Europe”. But why so desperate?

The answer to the question is not to be found in Warsaw. It lies in Rome and Athens. Till now, China had targeted two strategically located countries- Italy and Greece to be part of its initiative to redraw the historical Silk Road.

Read more: The story of Greece’s colonisation by China and its fight for liberation

Since the two Mediterranean countries have been facing prolonged economic distress, Xi also managed to make some early inroads. The  Piraeus port in Greece and the Trieste port in Italy were being seen as China’s gateways into the European Continent.

Read more: From being Beijing’s puppet to kicking CCP out of their ports, Italy has come a long way

But China’s usury and lack of benefit to the locals led to both Rome and Athens kicking Beijing out of their country. So, suddenly China found itself thrown out of the European Continent with the two crucial gateways into Europe getting permanently closed.

Poland enjoys a highly strategic and convenient location, right in the very centre of Europe. If you want to make big investments in the Continent, you have to establish a strong foothold in Poland. It is really the biggest junction in Europe where the trade routes from North to South and East to West intersect.

In fact, Warsaw is so middlemost to Europe that it takes only a few hours of road, rail or air transport to reach commercial centres in the Continent like Berlin, Moscow, Vienna, Kyiv, Minsk, and Vilnius.

So, it is very natural for China to prompt Poland into a strategic relationship with itself.

Moreover, there is currently a power vacuum of sorts. Poland is brimming with anti-EU sentiment and is also critical of Moscow with the ongoing Russia-Ukraine tensions. So, China finds a power vacuum that it wants to exploit.

This is why Xi made some tempting offers to Duda like expanding agricultural, food and other imports from the Central European country while encouraging more Chinese enterprises to go to Poland for investment and cooperation.

Basically, Xi is pointing out that since Poland will not cooperate with the EU and Russia, Beijing will fill in the vacuum.

Honestly speaking, China’s colonisation attempts in Greece and Italy have already failed. And we don’t expect a different result in Poland either.

At the end of the day, Poland is not a China-friendly country. Poland has expressed reservations about China in the past. It even excluded Chinese telecom company Huawei from its 5G networks amidst the US allegations of potential security risks with Huawei.

Last year, a former Huawei executive was indicted by Poland on the accusation of spying for China. Poland understands that security issues are at the forefront in Central and Eastern Europe as what resulted from the recent tensions between Lithuania and China. Beijing’s attempts at colonising Poland could as well backfire because Warsaw is unlikely to play into Xi Jinping’s debt-trap strategy.

Biden wanted to use Quad against Russia. PM Modi spoils his party