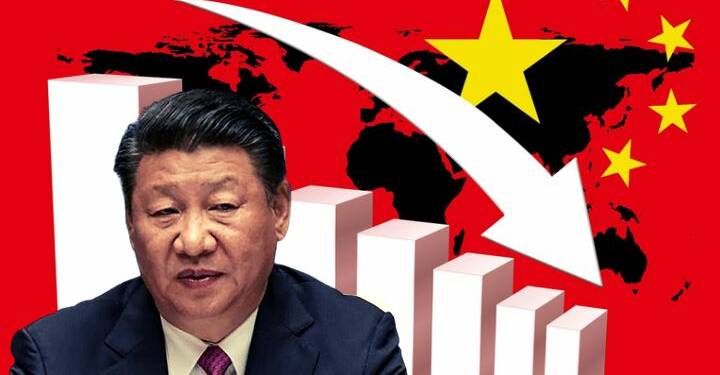 The present human generation has grown listening to the story of China’s meteoric rise as the world’s second-largest economy. An entire generation of kids have grown up being told that their birthday gifts, their toys, their clothes and their holiday gifts were all made in China. Till 2016, almost all countries in the world perceived China as a powerful and respected nation.

But something changed in 2016. By the end of the 2016, a blunt American patriot was elected as the US President. Hated by the political elite, the deep State and the liberal mainstream media, this man exposed China’s true face. Everything went downhill for the Communist country all of a sudden and it lost its image of a global power. This has created an epic story- the story of China’s rise and fall.

Till 1972, mainland China was poor, underdeveloped and isolated. Under Mao Zedong’s leadership, the People’s Republic of China (PRC) went through several decades of very slow economic growth. At a diplomatic level, the US had recognised Taiwan as the sole legitimate government of China, which kept the PRC completely isolated at a global level. It had no representation at international forums and was limed to very few allies.

Then, in 1972, Richard Nixon decided that he will go to China. His visit has since been described as ‘the week that changed the world’. The visit had taken place from February 21 to 28 that year and China is even planning to celebrate its 50th anniversary.

Nixon’s visit was full of signalling and symbolism. Backed by Henry Kissinger’s backroom diplomacy, the former US President was trying to corner the Soviet Union. The visit had taken place at the peak of the US-Soviet Cold War and Nixon realised that China and the USSR were embroiled in deep differences despite their ideological similarities. So, Nixon thought- let’s divide the two adversaries, befriend China and isolate the USSR.

The Nixon-Kissinger duo had their reasons for befriending China. But at the end of the day, China’s brutal Communist regime was infamous for committing atrocities, orchestrating mass murders and pursuing territorial expansionism. So, why should the world accept China? To solve this conundrum, the US political elite started a PR campaign to mainstream China.

The PR campaign to extol China

Since Nixon’s China visit, the US liberal media and deep State made all efforts to make a big deal out of China. Chinese leaders and thinkers were portrayed as some sort of invincible strategic planners with great foresight who thinks in terms of centuries and not years.

Take the story of former US National Security Advisor Henry Kissinger and then Chinese Premier Zhou Enlai for example. The two leaders met in 1972 and Kissinger asked, “What was the impact of the French Revolution?” Enlai’s answer was no better than that of a clueless Chinese diplomat. He said, “Too early to say.”

Read more: How one misunderstanding back in 1972 led to the myth of Chinese foresight and excellent planning skills

Kissinger overestimated Chinese foreign policy planning and thought Enlai was speaking of the 1789 French Revolution. He was impressed at the thought of Chinese strategic circles thinking in terms of centuries. But there is a twist- Enlai actually had no clue of the 1789 French Revolution, rather he was speaking about the much more recent student uprising in Paris in 1968.

But the time the truth came out, the world was already served with the over-hyped b

And the West didn’t just serve propaganda material to make a big deal out of China but also helped China become a major player in international affairs.

It was the West that forced to give up its permanent seat in the UN Security Council in 1971. And China was willingly handed over the key to control the world at its whims and fancy thanks to the veto power.

If there was any doubt about the America’s commitment towards China, former President Jimmy Carter severed ties with Taiwan in 1979 and recognised the PRC instead.

Read more: ‘What is Taiwan? We only know China,’ Taiwan did not exist for the world before Coronavirus

Western bonhomie towards China continued, while the CCP kept committing crimes like imposing a brutal ‘one child policy’, oppressing ethnic minorities and bullying its neighbours.

US Presidents literally turned into Chinese ambassadors and advocated pleasing China at any cost. Former President Bill Clinton even opened up the gates of the World Trade Organisation (WTO) for China even though the Communist nation never created a level-playing field for foreign companies.

In 2010, China became the world’s second-largest economy, thanks to American support. China became so big that the former US President Barack Obama even conceptualised G-2, or group of two, which was basically a plan to create a bipolar world led by the US and China, in which Washington, D.C. and Beijing would sit down together and manage global affairs.

But Chinese strategists thought, if we are actually so powerful, we should create a unipolar world led only by China. So, in 2012, the Belt and Road Initiative (BRI) was launched. A dilapidated US was actually giving in to Chinese coercion and three narratives also came up to back China’s ambitions-

But for all the propaganda built around China, its downfall was more of an anti-climax. In January 2017, Trump assumed office as the US President. And on top of his agenda was demolishing China. He blew China’s world domination dreams to smithereens with three counter-narratives-

To take on China, Trump imposed tough tariffs on strategic goods like Chinese steel that were hampering US manufacturing industries. He followed it up with sanctions on Chinese firms associated with the PLA and literally delinked the US from the Chinese economy.

Soon, the vulnerability of Chinese defence manufacturing was opposed and if anything was left to be proved, the Indian Army came into the picture. In 2017 and in 2020, India gave a bloody nose to the Chinese PLA in Doklam and Galwan Valley regions of the Himalayas. The image of an invincible Chinese military was shattered completely.

Read more: The team that gave China a bloody nose in Doklam is back again, the nose will get bloodier

And soon, China faced a major meltdown. Trump had it exposed inside out. And therefore, China started the era of wolf-warrior diplomacy. Frustrated Chinese Foreign Ministry officials and diplomats now keep abusing and cursing China’s adversaries. The true face of China has been exposed for everyone to see.

There was a time when the communist nation was a powerful and respected nation till 2016, but everything has gone downhill ever since. Today, China is easily the most hated country in the world and is infamous for its belligerence throughout the world. And if there is one man who is to be credited with this achievement, it has to be Donald Trump.