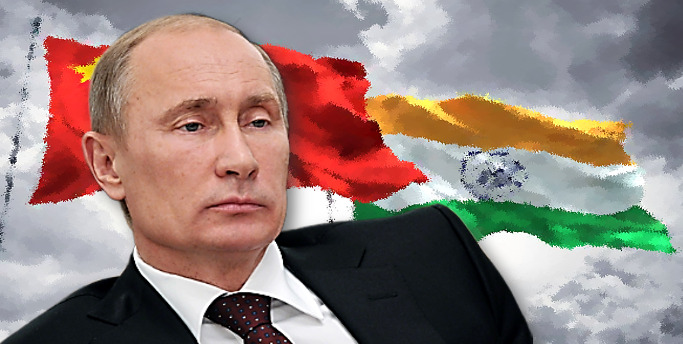 If we go by what US and EU diplomats were saying after the Ukrainian invasion, the Russian economy should have been driven into penury by now. However, six countries- India, China, the UAE, Saudi Arabia, Iran, and Israel are canceling the West’s sanctions against Russia and making them virtually useless.

These six countries have unique ties with Russia. And none of these countries is ready to sacrifice them at the altar of the Western world’s agenda. So, they have become a bloc in themselves over the Ukraine crisis.

China, on its part, is helping the Russian oil and gas industry soften the impact of Western sanctions and sell energy to other countries through Yuan despite threats of being cut off the Dollar-based global payment settlements system.

In fact, as per a report, two officials said that India and sanctions-hit Russia are thinking of devising a rupee-ruble trade mechanism by using China’s yuan as a reference currency to value it.

Meanwhile, China and Russia have worked together to evade the effect of Western sanctions. Russian oil producer Surgutneftegaz has allowed Chinese buyers to receive oil without providing guarantees called letters of credit (LC) to avoid Western sanctions. Western sanctions have led to all banks suspending the issuance of LCs for Russian oil. But Moscow and Beijing seem to have found a way to bypass Western restrictions.

The West has targeted top Russian billionaires and oligarchs. Even Roman Abramovich, the billionaire tycoon who owns the Chelsea FC Football team has been sanctioned. These Russian oligarchs are looking for an option to evade Western sanctions. Israel is one such option, given that the Jewish country hasn’t imposed sanctions on Russia. Also, some of the top oligarchs are Jewish with Israeli citizenship under Israel’s Law of Return.

As per some media reports, Russian oligarchs are moving to Israel. The Israeli government officials and Foreign Minister Yair Lapid have said that the Jewish country will not be a route to bypass Western sanctions. However, no law in Israel would prevent Russian oligarchs with Israeli citizenship from depositing their money into bank accounts in Israel.

Dubai has emerged as another haven for Russian money. Russian oligarchs already have millions of Dollars parked in the city. While the Western world has frozen Russian accounts and Russian property, the UAE is imposing no such restrictions. So, if a Russian oligarch wants to avoid Western sanctions, Dubai is the place to go.

The Middle East won’t give its oil

Meanwhile, both the UAE and Saudi Arabia have turned down Western requests to increase oil output. They are simply not ready to help the Biden administration in reducing the impact of surging crude oil prices amidst the Ukraine crisis.

Meanwhile, Iran is throwing its own tantrums. The US and other Western powers were hopeful of reviving the Iran nuclear deal or what is officially called the Joint Comprehensive Plan of Action (JCPOA). This would have helped them purchase Iranian oil and avoid purchasing Russian oil.

Read more: Israel makes it truly clear to the USA that it will not hesitate in going for an all-out war against Iran if Biden goes ahead with JCPOA

However, Iran isn’t letting the West have its way. Efforts to revive the Iran nuclear deal have been halted. European Union foreign policy chief Josep Borrell said that the pause was necessitated by “external factors” which suggests how Iran may have snubbed the West at Russia’s instance.

Western sanctions have thus got effectively canceled. There are simply way too many leaks that make West’s restrictions useless and meaningless. And all this is happening because six powers across the globe have decided to nullify restrictions against Russia.