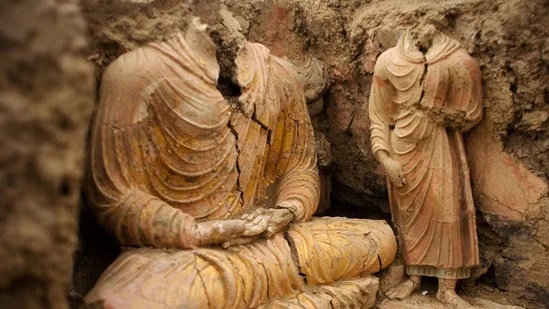 Afghanistan’s Taliban rulers are facing a major conundrum. How to keep their country running? International sanctions have piled up and the cash-starved Taliban administration really needs some help. So, it is looking at China as an option for extracting Afghanistan’s mineral wealth.

Taliban wants China to operate the Mes Aynak copper mine, which is believed to be the world’s largest deposit of copper. But there is a problem- terracotta Buddha statues sit in quiet meditation at the copper mining site. And China says they ought not to be destroyed.

In fact, the Taliban has actually stationed its fighters to guard the statues. This is strange. Remember, when the Taliban had first come to power two decades ago, it had blown up Buddha statues while describing them as pagan symbols.

This time around, Hakumullah Mubariz, the Taliban head of security at the site, said, “Protecting them is very important to us and the Chinese.”

In fact, the Taliban’s acting Minister for Mining and Petroleum Shahabuddin Delawar has dismissed open-pit mining as it would raze the site completely and the Buddha statues won’t be preserved.

On the other hand, the option of underground mining has been described as a bit too expensive by the Metallurgical Corporation of China (MCC), which is in talks with the Taliban for starting mining operations. The Culture Ministry has therefore been tasked with a plan to relocate the relics and preserve them. They are likely to be moved to the Kabul Museum.

Delawar told The Associated Press, “We have already transferred some (artifacts) to the capital, and we are working to transfer the rest, so the mining work can begin.”

So, both the Taliban and China want to preserve Buddha statues. Given their respective track records and ideologies, it appears absurd.

For the Taliban, preserving the statues is a compulsion because it has only China to rely upon and China wants to avoid demolishing the Buddha statues.

But why does the CCP want to preserve Buddha statues? Well, in Tibet, the CCP has been running a full-fledged genocide and has been trying to remove every trace of the region’s Buddhist culture. Yet, China gets away with it because the international media doesn’t care much about Tibet and Beijing censors private media coverage in the region completely.

Read more:  Only Mongolia can save Tibetan Buddhism from being ravaged by China

However, Afghanistan is different. The foreign media has a good presence in the war-torn country and does cover every major event. When the Taliban had first demolished Buddha statues almost two decades ago, it did face international condemnation. Therefore, if China and the Taliban blow up Buddha statues in this part of the world, foreign media will write about it.

Ultimately, countries with Buddhist traditions like Japan and ASEAN countries won’t tolerate any damage done to Buddhist history and culture in Afghanistan. And they will blame China for it because everyone knows that China is the only country active in Taliban-ruled Afghanistan.

And China doesn’t want to further deteriorate its relations with Tokyo and ASEAN. After all, China has significant trade and investment interests in East Asia and Southeast Asia, which it cannot allow to get jeopardized.

So, you end up in a situation where the CCP is actually forced to worship Buddha. Despite its decades-old history of erasing Buddhist culture, it seems that the CCP is finally losing its maniacal battle with Buddhism.