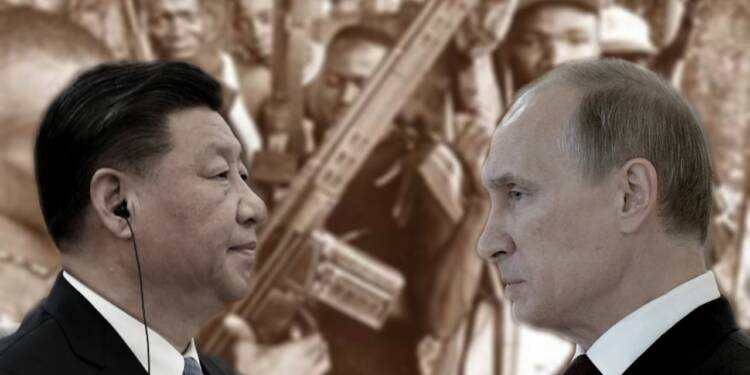 Biden’s sanctions on Russia may have just created an opportunity for China to enter the African arms market and become stronger and bigger.

Russia is the largest arms exporter to the African continent and the sanctions against Moscow are going to create defence equipment supply disruptions in Africa. Now, US sanctions on Russia mean that Africa won’t be able to import Russian defence equipment that easily. A huge vacuum will be created. So, who will fill it? China, of course.

Presently, Russia is the undisputed leader in military equipment supplies in Africa. It caters to over fifty per cent of the African continent’s defence needs. Russia’s defence exports to Africa are more than double that of French exports. France is the second-largest arms supplier in Africa, followed by the US and China.

And the African defence industry actually remains strategically crucial. Russia’s largest customers on the Continent are Algeria, Egypt, Angola and Sudan. “This is significant since it underscores Russia’s efforts to establish a foothold in North Africa,” Joseph Siegle, a US-based expert said.

This region helps maintain influence and control over the Eastern Mediterranean, and the global chokeholds in the Suez Canal and Bab al-Mandab Strait.

China’s growing ambitions in the region

Beijing has even found some new customers like Nigeria and Ethiopia and has supplied them with armoured vehicles and rocket launchers. Yet, between 2000 and 2018, China held only a 7.5 per cent share in the African arms sales market. However, it is believed to have made bigger gains in the small arms and light weapons sector, which is not covered by the Stockholm International Peace Research Institute (SIPRI) data.

China looking to gain out of sanctions against Russia

Even before the Ukraine crisis, China was looking to eat into Russia’s arms supply share in Africa. John Calabrese, an expert at the American University in Washington, said, “I know that a few countries are among both Russia’s and China’s top customers, notably Algeria and Angola. In the case of Egypt, Russia has a much bigger arms sales footprint than does China.”

Now, sanctions give China an opportunity to further pursue its arms-selling ambitions in Africa. Calabrese said, “It is possible that China may try to capitalise on Russia being squeezed out of these markets when sanctions and financial restrictions begin to bite.”

Now, you may question why China? Why can’t other defence suppliers gain at Russia’s expense?

Well, the US under Biden simply doesn’t have the political will to ramp up arms supplies to Africa. So, the Biden administration won’t supply arms to Africa, nor would he let Africa import arms from Russia. This gives China a major advantage.

Read more: “Caught in Russia, labeled in China, and sold in the US” – How Americans are eating sanctioned fishes?

China has been copying Russian defence designs for years and has reverse-engineered several Russian military platforms till now. The Chinese Type 56, a copy of the Russian Kalashnikov has already found a market in Africa.

Now, as African militaries will start facing a deficit of Russian military platforms that they have been using for years, China will be able to say – I can give you a cheap substitute. Yes, the Chinese defence equipment will be of lower quality and hardly match up to the Russian standards. But when there is a vacuum in the market, low-quality products too can work.

China is therefore going to become richer and stronger due to Biden’s sanctions on Russia. The Chinese arms industry is going to get bigger and Beijing will enjoy more influence in a strategically crucial region only due to Biden’s big blunder.