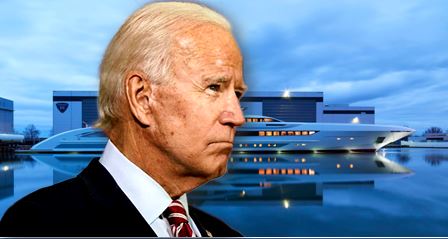 Americans are facing record gas prices, unbearable inflation, and a ravaged economy. Meanwhile, what is the President of the US, Joe Biden, doing? Well, he is using American taxpayers’ money to maintain swanky yachts owned by Russian oligarchs.

Yes, Russian oligarchs have effectively parked their superyachts and the US-led NATO is maintaining them for free.

In fact, the US Department of Justice (DOJ) has even created the KleptoCapture unit, a task force to track down assets of sanctioned Russian individuals and take them into custody.

However, Andrew Adams, a New York federal prosecutor heading KleptoCapture, said that once government officials take custody of an asset, it is also their duty to maintain it. So, they have to spend heavily on its maintenance. This is to ensure that the asset doesn’t lose its value when it is in the government’s possession.

How expensive is it to maintain a yacht?

And make no mistake, maintaining a yacht is way too expensive. With high-end facilities like spas, salons, and jetted pools on superyachts owned by Russian oligarchs, you end up spending a fortune only on their upkeep.

The US official added, “We have to undertake that kind of responsibility.”

It is a headache for sure. The government authorities have to find well-trained staff for the upkeep of the superyachts. Employing the pre-existing staff is generally not practicable, because they are on the payroll of the sanctioned billionaire and they usually quit their jobs once the yacht has been seized.

Typically, the yearly operating cost of a superyacht is 10% of its total value. It is a billionaire’s product, so they are really quite expensive. Spain recently seized Russian billionaire Viktor Vekselberg’s $95 million superyacht Tango.

So, maintaining Tango alone would cost the US a whopping $9.5 million per year. And does it affect Viktor Vekselberg? Well, no. Vekselberg gets free parking and upkeep for his superyacht. It isn’t really a bad deal for him.

Read more: Why did the Western sanctions on Russia fail?

How much is being spent on Russian superyachts?

Well, over a dozen superyachts have been seized or detained in European ports over the past six weeks. Together, these yachts are worth around $2.3 billion.

The world’s largest yacht, Alisher Usmanov’s Dilbar, too has been seized by German authorities. It is ultra-expensive and US Treasury pegs its value at $600 million to $750 million. So, $230 million will be spent on a yearly basis on the upkeep of seized Russian yachts.

For Russian oligarchs and billionaires, the confiscation of their yachts barely means that they are deprived of little vacations and a bit of recreation. But it isn’t as if their yachts are being destroyed or permanently stolen. In fact, they are not even getting depreciated because NATO will maintain them for free.

So, if NATO sanctions against Russia aren’t working, there is no need to be surprised. The Western world is hardly affecting Russian businesses and is, in fact, rendering yeoman’s service for Russian superyachts.